“We are healthy only to the extent that our ideas are humane.” Kurt Vonnegut, Breakfast Of Champions

Manuka Honey is made by bees that feed the Manuka trees  in New Zealand. It has antibacterial properties and has been used by the Maori in their tonics and remedies for many years. Manuka Honey is graded with UMF rating. A rating of 20 or above will give you the strongest medical benefits. Under that number, it is still expensive and tastes good and acts like other honey. I use it for everything.  It is particularly good for colds and wound healing. You can get it on Amazon.

Japan is a country of specific etiquette. Correct manners are very important to the Japanese. It’s very easy to embarrass yourself in Japan as an American.  Japan is a society of cleanliness. It is a culture of bath houses and onsens. You have never seen so many people brushing their teeth and gargling  in public restrooms. Japanese are obsessed with Gargling With Salt as a cure for everything. My Japanese friends carry salt when they travel. According to my doctor, it’s a home remedy that really works.  They also carry handkerchiefs in case there is nothing to dry their hands with in a public restroom.

I stumbled upon Twenty Per Cent Arnica (ours is five percent) in Israel when I hurt my knee in Tel Aviv. Your bruise can be  gone in two days. I found it at a homeopathic pharmacy on Ben Yehuda Street. I use it very sparingly till I get more.

Coca Tea is used in the Andes to help with altitude sickness- which it does. I drank it every day in Peru.  It also gives you an energy boost without the caffeine spikes. I usually drink it as my second cup of coffee.  It is also good if you have an upset stomach. 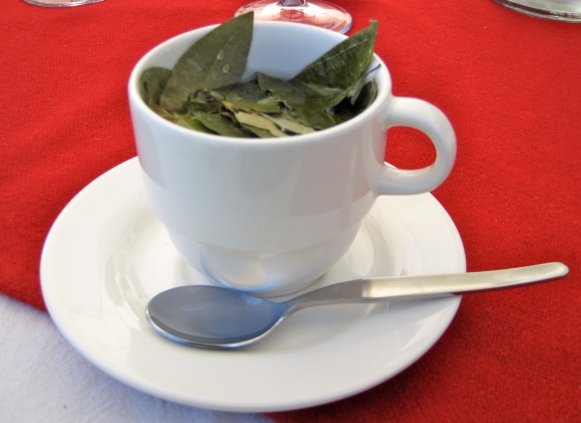 Be physically and mentally prepared to shop in the Spice Market in Istanbul, Turkey.  Be in a good mood. You will have many best friends and marriage proposals. Years ago, a man working there told me of the health benefits of Turmeric. Though the market is known for saffron, I had also heard turmeric was good for illnesses.  I’ve been taking it ever since and most recently bought some at the Arab Market in Jerusalem.

At Ver A Paso market in Belem, Brazil  I got some Brazilian Ginseng from the Amazon. It is used to build your immune system and give energy. They had a lot of interesting health products including many kinds of natural Viagra (seemed to be a big seller)  but that was the only one I knew.

I came back from Argentina with Yerba Mate and a Yerba Mate cup and straw. Yerba Mate is the national drink of Argentina.  Besides being a stimulant with less caffeine the coffee, it is packed with nutrients. It can boost the immune system, burn fat, increase bone density and help with digestive problems.

Marula Oil is a highly anti-inflammatory plant oil from South Africa and is known for it’s very high antioxidant count and  light texture. It is naturally soothing, fast-absorbing and suitable for all skin types including reactive and sensitive. ( that would be me).  My daughter gave a small bottle to her wedding guests in South Africa. I loved it.  I get it on Amazon now as well.

“Without new experiences, something inside of us sleeps.” Frank Herbert

The reason why it is so easy to float in the Dead Sea is because it is the second saltiest body of water in the world, with a 33% salt content.  The high salt content makes anyone buoyant and actually makes it pretty impossible to swim or do anything other than float.  The Dead Sea, which is actually a large lake, is so full of salt and minerals, nothing can live in it.  For being so salty, the water is pretty clear You can literally sit down in the water and float in a seated position. You can recline, you can lie flat, you can do sit-ups, you can do leg scissors, or pretty much any other  thing you can possibly think of. The water feels thick-almost oily.

The other popular thing to do at the Dead Sea is to slather black Dead Sea mud all over your body.  Dead Sea mud has many health benefits.  The rich minerals accelerate exfoliation and restore pH balance.  Dead Sea mud can improve elasticity.  The drying of the mud draws out toxins from skin cells.  There is an added benefit of looking really scary and seeing what your skin might look like when you’re 120 years old as the dried mud makes your skin pucker and move in very odd ways. It is really funny to see everyone on the beach like that. (selfie before the mud)

We stayed at the  Herod hotel in  Ein Borek. It is the only hotel with a private beach. The mud is not on this beach so they give you mud to use. It works. There are other beaches that have mud, but I opted for privacy,  ease and comfort.

You can get “Dead Sea mud treatments” all over Jordan and Israel, but here you’re actually at the Dead Sea getting it straight from the source. There are many other health and beauty spa treatments to do.

Don’t shave for a few days before floating in the Dead Sea. Have you ever had lemon juice on a cut?  That is the kind of pain you’ll experience. I did it when I was here and eighteen years old and I still remember that pain. Also, beware that any cuts or abrasions are going to sting.  Your skin will start to tingle after spending some time floating in the Dead Sea even without any cuts .Don’t get the water in your eyes.  If you do, it’s going to hurt l and you’ll need to get your hands on some fresh water . Wear an old and/or dark bathing suit.  The mud is dark and it can stain or make colors fade. I know that now.

Leave enough time to take a long shower. You can try to rinse off all the mud in the Dead Sea, but it’s pretty hard to get it all off.  Also, as soon as you leave the water you’ll notice deposits of salt stuck on your body.

People came  to the Dead Sea many years ago, because the water was supposed to be magical. It’s said to heal all kinds of problems like psoriasis and osteoporosis. There is not only a lot of salt in the water but many other minerals. Along with soaking in mineral rich water, you are very far below sea level (in fact, the lowest point on earth!) so that you aren’t getting the sun rays that will burn you. For that reason it’s a safe place to lay in the sun and let the mud and salt water work their magic. People come from all over the world on medical trips to help their health, while looking for alternative cures. (view from my window- bathers at sunrise). 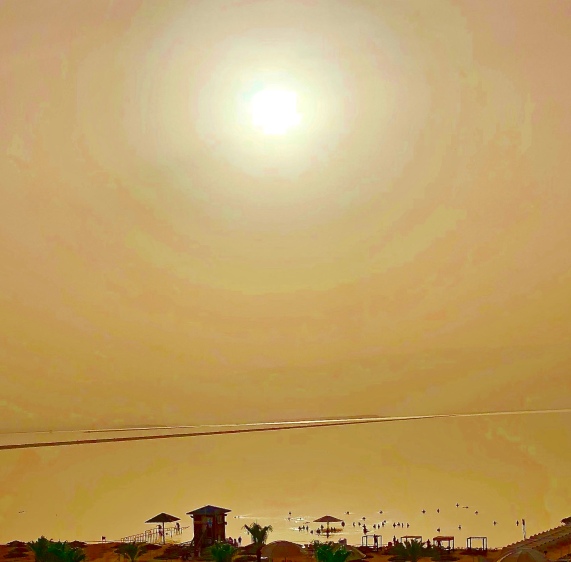 The Dead Sea has been rapidly shrinking in recent decades due to the diversion of incoming water from the Jordan River. Large sinkholes have recently started appearing, and while Israel and Jordan are trying to save it, there’s no certainty that it will last for much longer. The sooner you come,  the more water will be here for you to enjoy. The Dead Sea is nothing short of amazing.

If you want to take photos while covered in salt and mud  or floating in the sea use a cheap waterproof camera. I did not have one.

It is a  happy, tiring day ( asleep with an ice cream cone,).

“People who love to eat are always the best people. – Julia Child”

You read restaurant reviews in bed before you go to sleep to relax.

You refuse to eat a grilled cheese sandwich with less than three different cheeses.

Bacon or pork makes anything better.

You spend hours researching your dining itinerary whenever you travel including making reservations from home whenever possible.

The first thing you ask your friends when they return from vacation is “What  did you eat? What are the good restaurants there?”

You use words like truffle season, farm to table, organic, fusion, layers of flavor, deconstructed and tasting menu in an annoying way.

You can’t date anyone who is into health food, a vegetarian or a picky eater.

You judge other people by the food they order.

You refuse to vacation anywhere that is not known for its good food – like  Disneyworld.

You own more than three kinds of salt. That also goes for vinegar, oil and mustard.

You wait on a long line to try the newest must eat thing.

You have more pictures on your phone of food than of your kids.

You feel obligated to try every interesting food  truck that you see.

You will drive for hours to eat a delicious  meal.

People give you restaurant gift certificates as a birthday gift.

You are planning the next meal before you finish the one you are eating.