“And my conclusion Is, since I had been on very good terms with Anne, that most parents don’t really know their children.” Otto Frank after reading Anne’s diary

One of the most famous residents of Amsterdam is Anne Frank. Every school age child in the United States has read her diary. It has been translated into 67 languages and sold over thirty million copies. She became the voice for those who did not have a voice. The secret annex where Anne, her family and friends had hidden for two years became a museum in 1960.

The Anne Frank House was at the top of my list of places to visit in Amsterdam. I was much younger than Anne when I read her diary for the first time. Her yearning for love, freedom and peace were very real to me. I wanted to be just like her.  When I saw the bookcase in the house,  it changed from a story to reality. People move slowly and quietly through the annex. The rooms are dark and empty. There are quotes from the diary, pictures on the wall,  an exhibit that tells what happened to the residents  and at the end is a beautiful film which tells how her story affected different people’s lives. There are no photographs allowed.  I was mostly in my head reliving the parts of the story I knew so well. 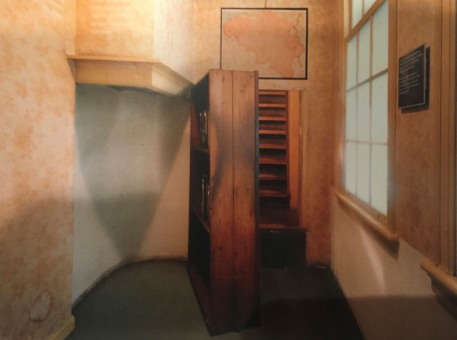 I took a walking tour of the Jewish quarter with Jeanette Loeb.  http://jewishhistoryamsterdam.com  Her knowledge of Jewish History in Amsterdam is extensive and I was lucky to find someone who gave such a comprehensive tour. She has a lot of background information and interesting stories about the places we visited  – especially about the Portuguese Jews in Amsterdam.

The Portuguese Synagogue is Amsterdam was built in 1675. During the Spanish Inquisition, Jews in Spain and Portugal were forced to convert to Catholicism. Many escaped to Amsterdam for freedom of religion. The interior is a single very high, plain, rectangular space with wooden benches built in Dutch Protestant style by Dutch architects.  It survived the Nazi Invasion unscathed because they were going to use the building.

The Hollandsche Schouwburg was a popular theatre. In 1941 the Nazis changed the theatre’s name into Joodsche Schouwburg, or, Jewish Theatre. After that, only Jewish actors and artists were allowed to perform there – for a strictly Jewish audience. Between 1942 and 1943 Jews from Amsterdam and surrounding districts were obliged to report at the Hollandsche Schouwburg before being deported. It became a transport center. The Jews were transported to the Dutch transit camps in Westerbork or Vught. These were the last stop before they were herded into trains bound for one of the extermination camps. It is now a memorial.

Jan Wolkers, a famous Dutch artist and writer, created a  holocaust monument in the Wertheimpark in Amsterdam. The monument called “Broken Mirror”, is made from glass panels and reads “Auschwitz, never again”. It covers an urn filled with ashes from Auschwitz. The mirrors are supposed to reflect that air, sky and the world around us, will never be the same again. it has been vandalized several times.

The Stolperstein Memorial  Project was designed by Berlin artist Gunter Demnig to commemorate the victims of the Holocaust.The stolpersteins  (which means stumbling stones) are small, cobblestone-sized memorials for individual victims of the Nazi regime. The idea was to commemorate them in front of their last chosen place of residence. It is the largest memorial project in the world covering several countries. Demig felt that you have to make a decision to visit a holocaust memorial but with stumbling blocks, you can look down and see them at your feet. It is not a memorial to six million but to individuals – one plus one plus one. 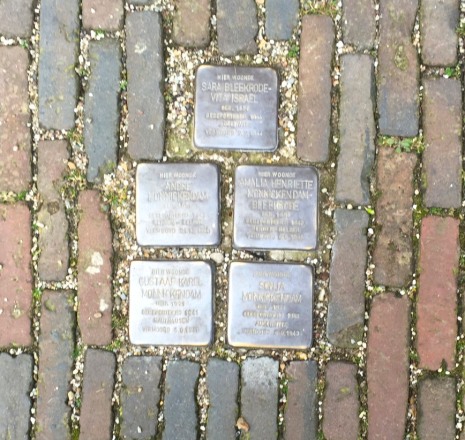 The Jewish Historical Museum has a permanent collection about the history and culture of the Jewish people in the Netherlands as well as temporary exhibits.  They were currently showing the Amy Winehouse exhibit curated by the Jewish Museum in London. It shows unseen photographs, favorite outfits, her collections, influences and passions and of course her Jewish roots.  I loved the videos of her singing. 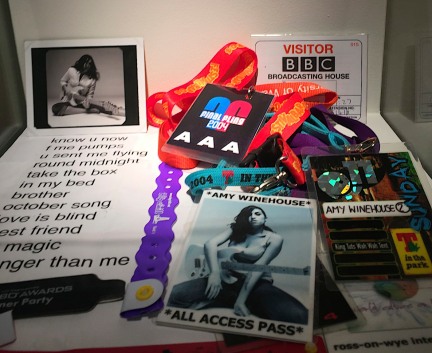