Drive Through Art  In The Time Of Corona

“Resilience is accepting your new reality, even if it’s less good than the one you had before. You can fight it, you can do nothing but scream about what you’ve lost, or you can accept that and try to put together something that’s good.” Elizabeth Edwards

Drive through attractions are an innovative solution to the social distancing challenges presented by  Covid 19. Drive In movie theaters are making a comeback.

The Van Gogh Exhibit in Toronto, Gogh By Car, is an immersive drive through experience of art, light, sound, movement and imagination. It sounds like fun.

We had our first drive through art experience this past weekend. The Museum of Latin American Art in Long Beach, Hyundai, and the Hollywood Palladium got together and developed a plan for something special. Driven: A Latinx Artist Celebration was free with online tickets. 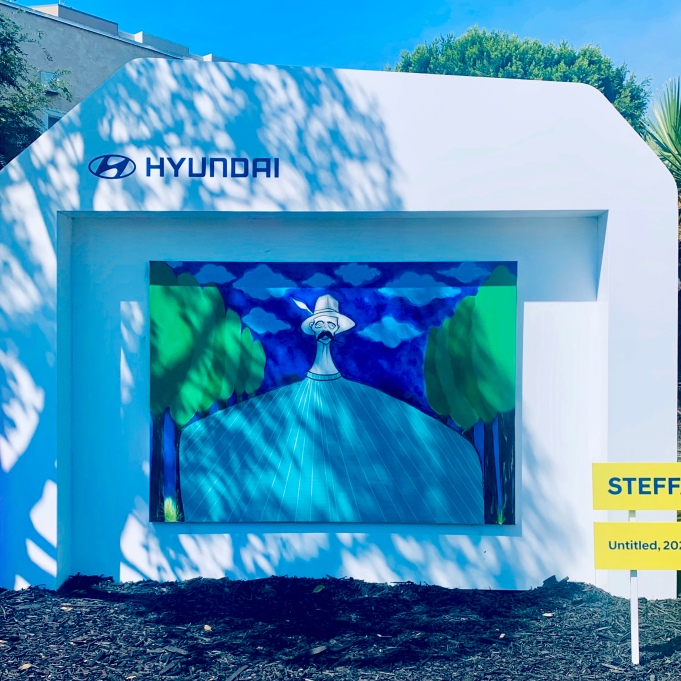 Now that the pandemic has closed public restrooms (not that I even want to use them),  going anywhere involves liquid intake planning. It did not help that it was 110 degrees in Hollywood and I could have used some water. 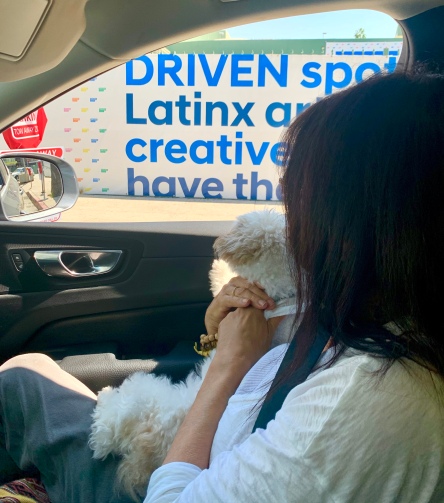 Our tickets were for 12:00 pm on the first day of the exhibit. I believe it was the first time slot. Lesson one about a drive though art exhibition would be don’t go on the first day so they can iron out the kinks. 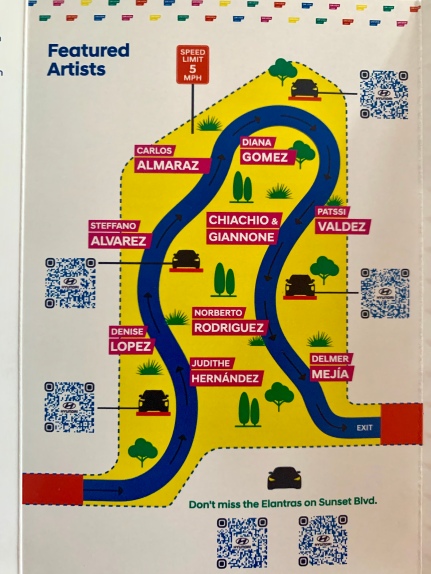 It took us fifty minutes to get there after a large morning coffee. We then had to wait forty five minutes. Even though they said you cannot leave the car, I got out to try and walk my dog. At least one of us could pee.

When we finally got in there, it was really cool.

I’m a fan of Hispanic Art so the paintings were interesting to me.

There is a playlist that you can access on your radio while driving through the exhibit.

It was such an inspiration to see the way that the artists and curators have demonstrated resilience and creativity by pivoting to a drive-through experience during this challenging time. 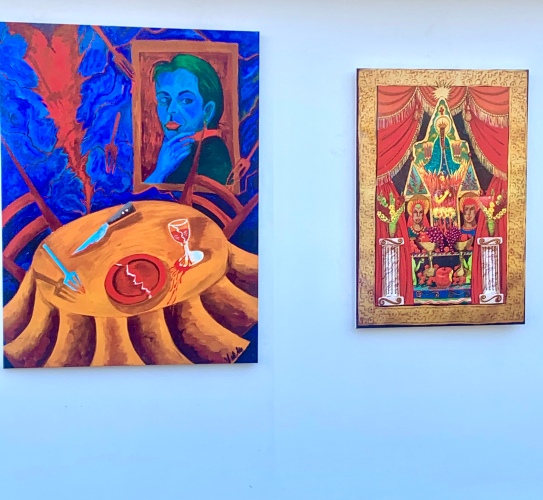 . Drive ins are the perfectly distanced social events. I hope there will be more of these. 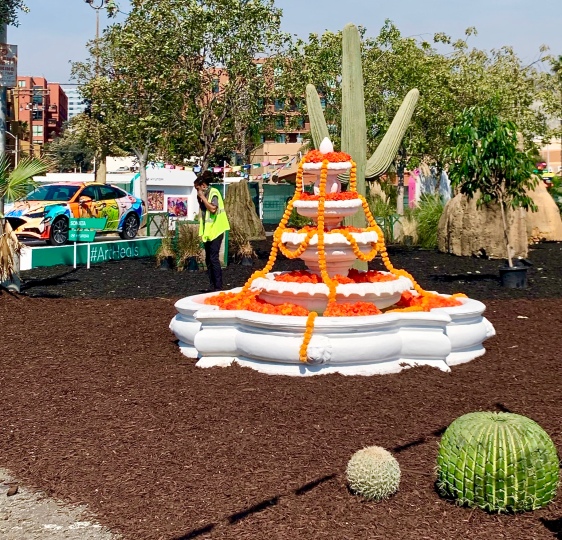 Visiting My Friends At the Museum Of Modern Art, New York

“Every child is an artist. The problem is how to remain an artist once we grow up.”Pablo Picasso

I didn’t know until I was in Junior High School that everyone did not grow up looking at Van Gogh’s Starry Night and Monet’s Water Lillies. For whatever reason my family spent a lot of time at the Museum Of Modern Art. I don’t know if it was because we loved it or because my mother was legally blind and could see the bright splashes of color. It was our museum. 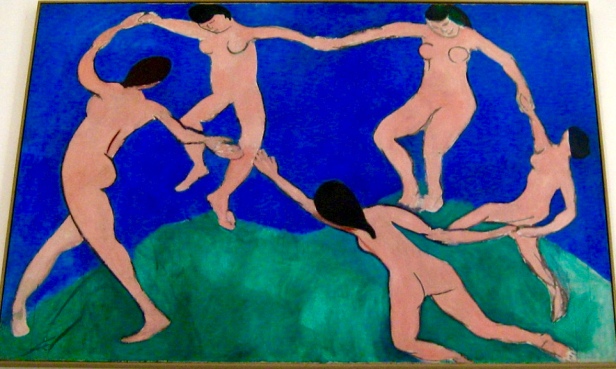 MOMA was a lot smaller and has been through several renovations but some of the paintings that I loved are still there. I never go to NY without a trip to MOMA to say hello to my paintings. 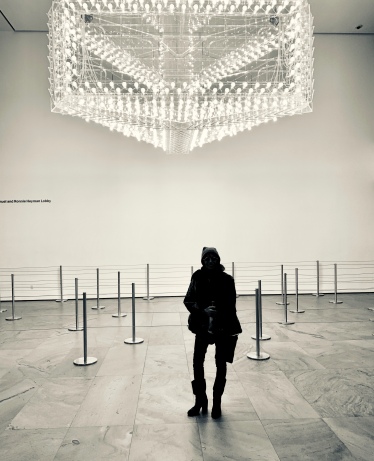 My first memory is of Henri Rousseau’s Sleeping Gypsy which was located at the beginning of the gallery. I was looking at a fantasy world more magical then anything I could have imagined.

Picasso’s Dancers, Three Musicians and Matisse’s Dance always put a smile on my face, even if I was not in a good mood. 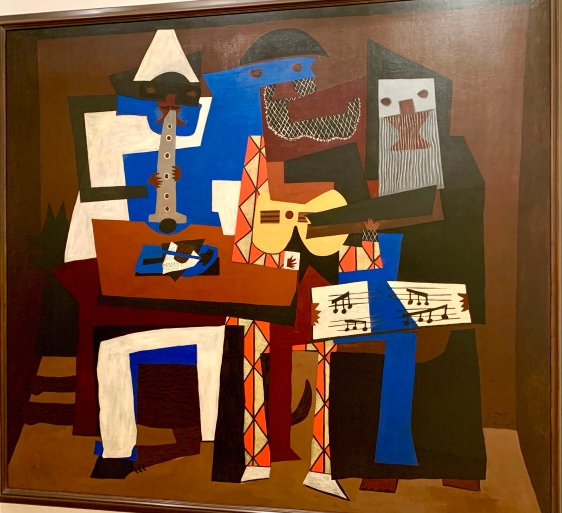 Jackson Pollack and Yves Klein’s Blue made me question the sanity of the adults in charge of the museum when I was very young. “I could do that,” I would say and my mother would laugh. 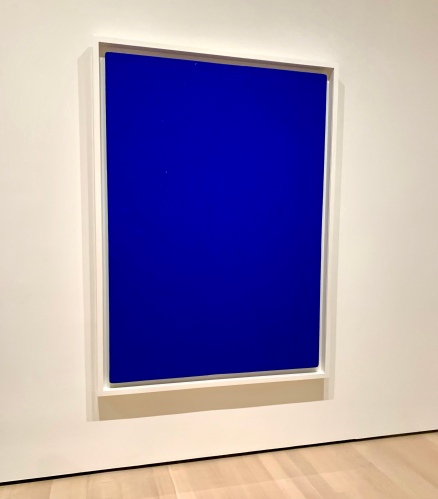 I would stand in front of Picasso’s Guernica and focus on a different part each time. It was from Guernica that I learned about war. The painting was returned to Spain in 1980 which was the year I left New York. I’ve stood in front of it at the Reina Sofia and was surprised at how much smaller it was now that I am an adult. As a kid, it felt like the largest, loudest painting, I had ever seen.

The new MOMA is much bigger and very beautiful. Walking through the building  is disorienting to me. and finding my friends is a lot harder.

But, the white walls filled with art are as calming to me now as they were in my childhood.

I look at the crowd of people and security guard in front of Starry Night and remember how many times  I stood in front of it alone. “This is a very  famous painting  and we are so lucky that we get to see it so often,” my mother would say. 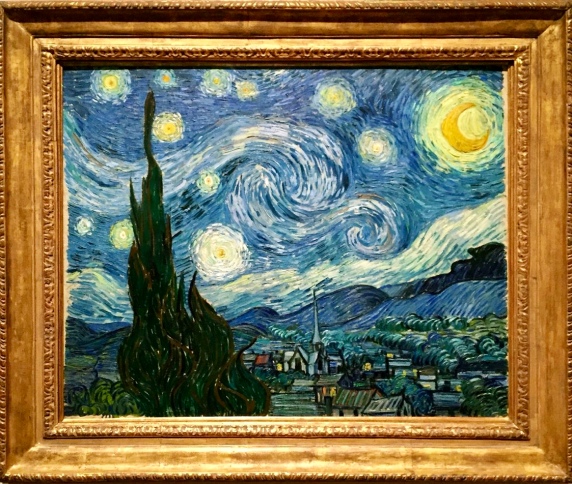 I smile at the Picassos, Cezannes and Matisses.  I find familiar Mark Rothkos, Mondrians, and my favorite childhood sculpture Brancusi’s Fish.

We miss the Water Lillies. and go back-just because. 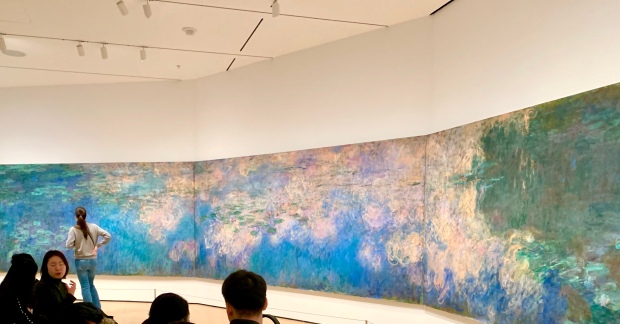 It is still a wonderful modern art museum and I leave thinking how much the city had changed. I swear that Magritte’s Eye winked at me on the way out. 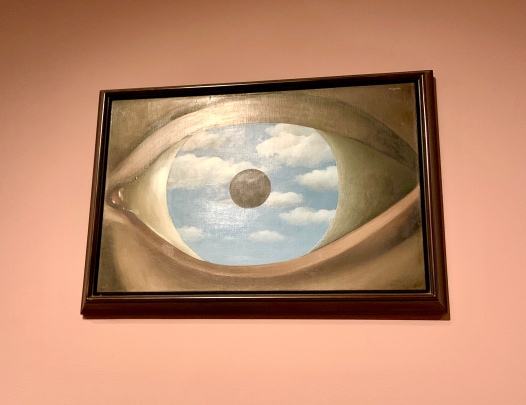 Forty Eight Hours in London With An Art Lover

“I don’t know what London’s coming to — the higher the buildings the lower the morals.” Noel Coward

Take a taxi to Saatchi Gallery.  I love London taxi drivers who know so much about the city.  The Gallery always has an interesting collection of contemporary artists. 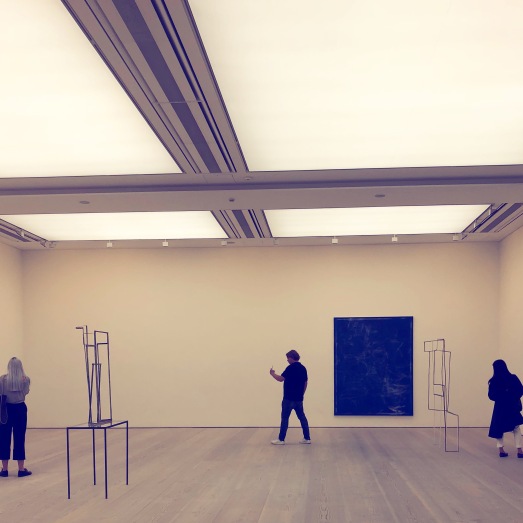 There was a great photography exhibit on human trafficking in Nepal. 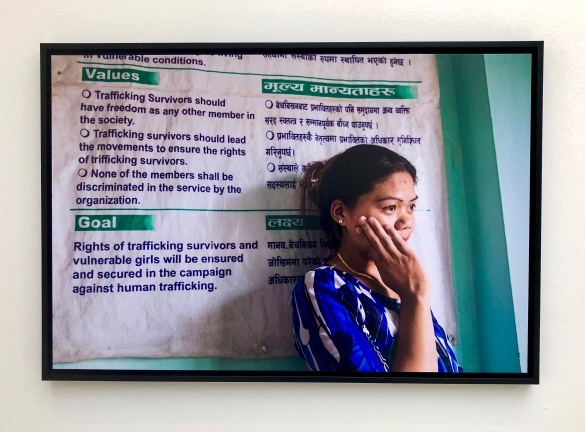 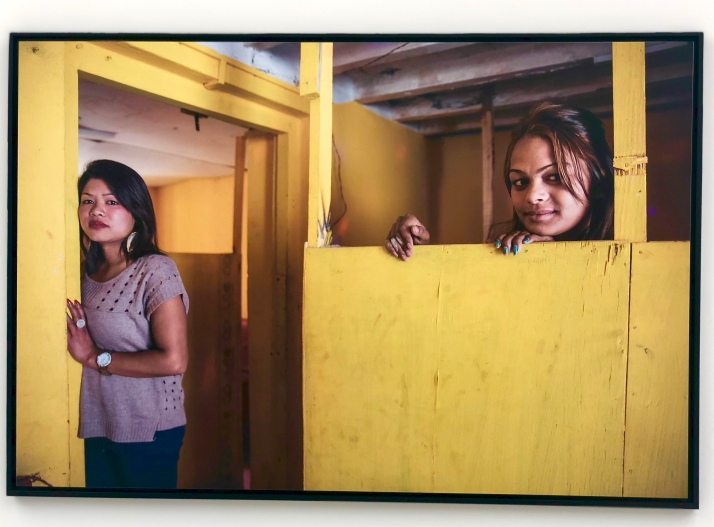 I tried to go to the  nearby Flower Show (biggest thing happening in London this weekend)  but I was losing steam. 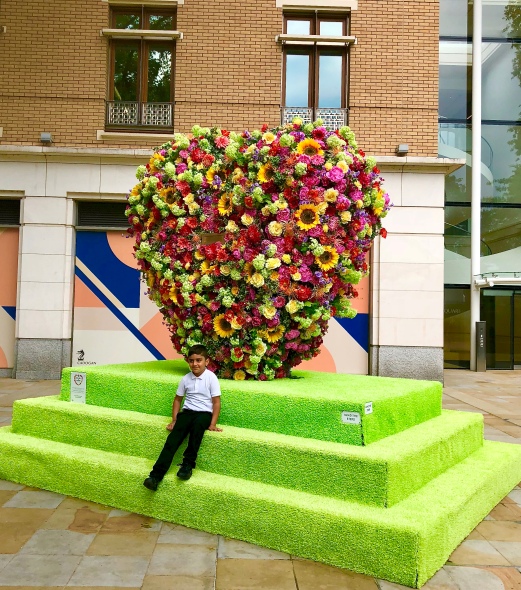 I went back to  the hotel for a quick nap. Dinner at Spring and drinks in the library at Covent Garden Hotel.  (forgot to plug in my phone)

Friday.  Yay – it is not raining. Breakfast at the Covent Garden Hotel.

I walked to the Tate Modern Museum.  It is about a half hour walk from Covent Garden over the Waterloo Bridge and down the South Bank of  the Thames. I love walking in London.

The one hour I had  planned to spend at the Tate Modern stretched into three. 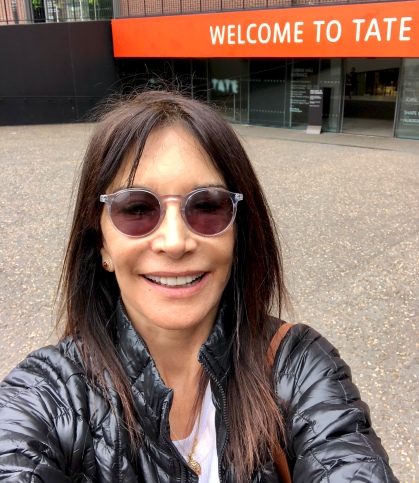 I was blown away by  Shape Of Light exhibit. 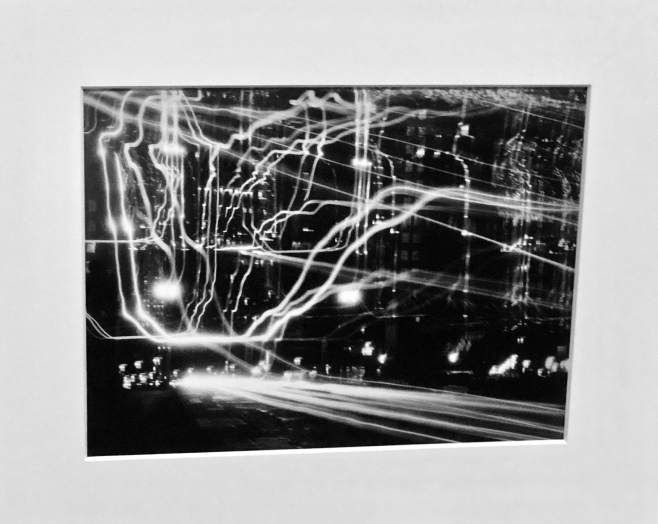 I spent a while there.

I walked through some of the collection.

It is truly my favorite modern art museum in the world and I could easily have spent all day here.

I grabbed a sandwich at the museum café and planned the rest of my afternoon.

There is an excellent photography exhibition going on at the Gallery at Oxo Tower which was also on the Southbank.  Windrush :Portrait Of A Generation is captured by photographer Jim Grover.  In 1948 a ship called the Empire Windrush brought 1000 passengers from the West Indies to Essex. They were mostly Jamaican men brought to help rebuild England after the war. Many settled in London. They were known as the Windrush Generation. 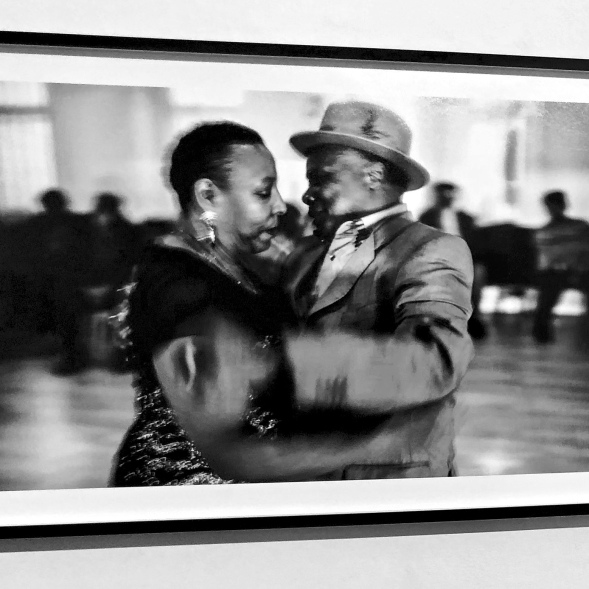 They came to symbolize the changing demographics of the UK. But, with the new tough stance on illegal immigration throughout the world, the descendants are now struggling to prove a citizenship status they formally took for granted. They are not illegal immigrants. Before 1973, Commonwealth citizens had the right to live and work in the UK, without additional documentation. This photo exhibition coincides with the seventieth anniversary of the Windrush and is a timely reminder. Will they be deporting the Irish who came to work in London during the famine in the 1850’s? The exhibition is crowded thanks to a good review in Timeout magazine.

I pass by the Hayward Gallery even though they are between exhibitions because I wanted to see the space. 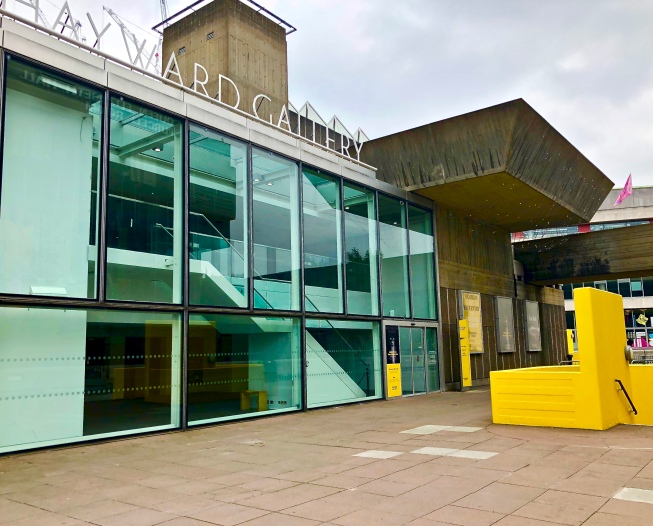 They don’t let me in so I continue walking.

I do some shopping and photographing around Covent Garden.

I have theatre tickets to   Everyone’s Talking About Jamie. The British are such an enthusiastic audience and they serve ice cream at intermission. It is very current and fun. I’m sure it will be here soon. There is nothing American theatre lovers like better than to say “I already saw it in London.”

The next morning I head to the National Gallery to see the Monet and Architecture exhibit.

I love both those things. His use of light in his paintings of the same subject is so inspiring and beautiful. 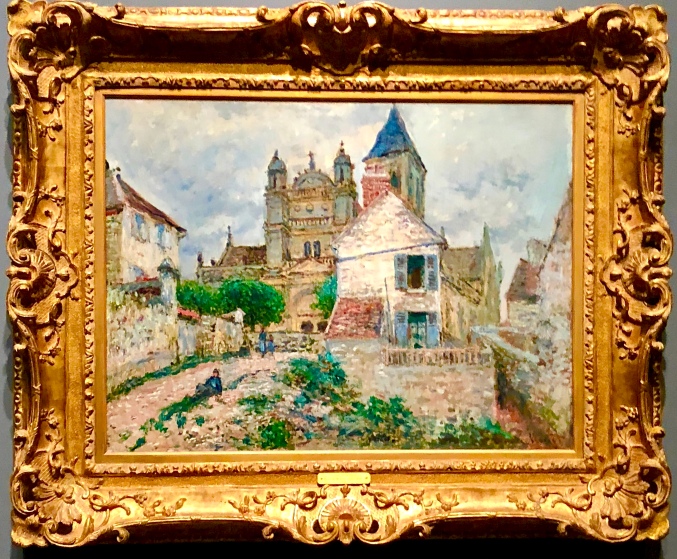 The National Gallery houses one of the greatest painting collections in the world.

A copy of Van Gogh’s sunflowers hung in my house growing up. I run up to visit the  original painting.

I have time for a quick stop at the National Portrait Gallery. It opened in 1858 and was the first Portrait Gallery in the world. There are paintings, photographs and videos of famous British people.

The pedestrian space in Trafalgar Square is filled with buskers, live statues and street artists.

For a street art lover like me, watching the artists create something while listening to beautiful Spanish guitar music on a sunny warm day in London, is a wonderful end to my trip. 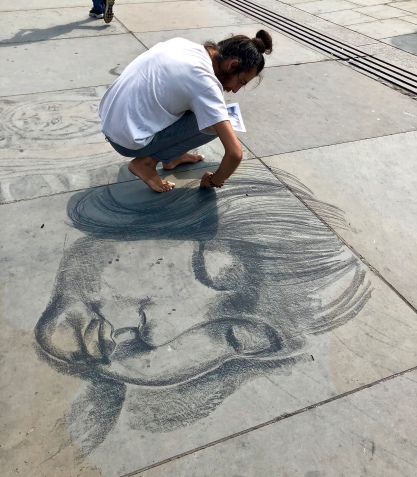 I have to come back soon. I am also a theatre, shopping and food lover and I couldn’t fit it all in two days.