Countries My Friends And Family Have Emigrated From To America.

“No one leaves home unless home is the mouth of a shark.” Warsan Shire

Growing up in New York, with immigrant grandparents, the Statue of Liberty meant something. “Tell us the story of when your parents saw the Statue of Liberty for the first time again” we asked.   My mother would say that to her parents and many like them, the statue meant freedom to live in a country where you could be whatever you wanted to be. America was the place to go to flee from oppression, racism, class-ism and poverty. We understood that it was something special to be born in a country with ideals like that.

America is not perfect. We have racism and poverty. But that doesn’t destroy the dreams it was built on. Millions of people came to America to build a better life for themselves and for their families and still do to this day.

On the Statue of Liberty, there are words I know so well: “Give me your tired, your poor, your huddled masses yearning to be free.” That’s the spirit that made me feel like an American.  I wouldn’t be here without that philosophy.

Countries That I Used To Know

‘Be the change that you wish to see in the world”. – Mahatma Gandhi

If you are looking for missing countries from the maps of your school days, here is a list of all the names. Countries have split apart, gotten back together, gained/lost independence or just didn’t like their names. How do we understand our place in the world if we don’t know about other places? Americans typically score very low in geographic literacy. What happens in the world is connected to where it happens in the world. We are supposed to be a “global village.” We should know the correct name of our neighbors and be interested in why they changed them.

We can’t afford not to pay attention to the world anymore. We have to change the story.

“As long as there was coffee in the world, how bad could things be?” Cassandra Clare

The Coffee Cultural Landscape of Colombia was recently declared UNESCO World Heritage Landscape for its “centennial tradition of coffee growing”.

The exquisite landscape is characterized by rivers, steep hills with coffee plantations and coffee farms. The major cities are Armenia, Perreira and Manizales. I flew into Perreira.

My coffee lesson begins at the beautiful Hacienda Venecia. (http://www.haciendavenecia.com) 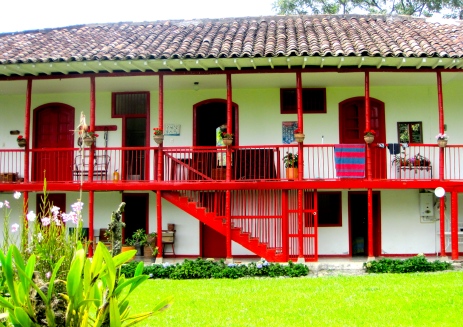 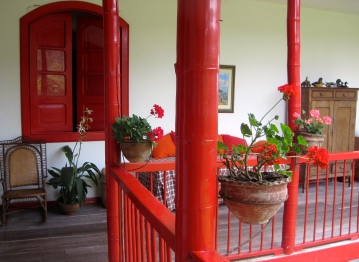 It is my new favorite Ajiaco soup and that is their specialty. It is a chicken soup made with three kind of potatoes and Colombian herbs. It is served with avocado and cream. (the chefs) 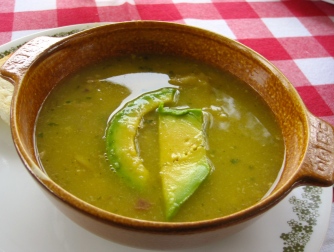 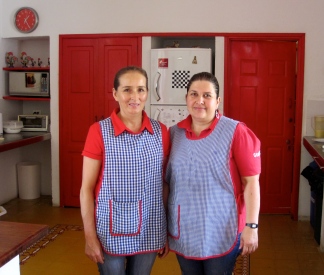 The coffee beans are the seeds.

We head down across a river bed to pick coffee beans.

They are always hand picked off the vine and don’t pick the green ones.

We start along a path but gradually we are walking through thick bushes smacking us all over.

I’m sure I must be getting malaria. The lives of the coffee pickers are hard and the work is tedious and difficult. ( I just walked out of that)

We learn how the beans are processed and about all the machinery, certification and care involved in transforming the berry into coffee beans.

, The fresh beans are examined. I was slow at finding the good ones.

These are good ones. Not broken and no scars.

Then we roasted my beans in a special toaster. (my coffee beans) 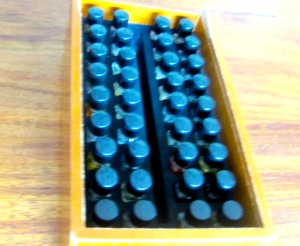 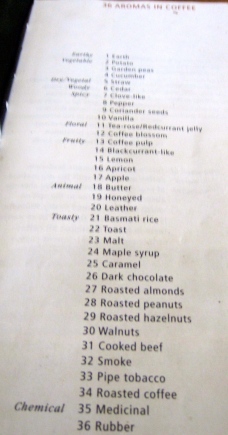 The premium beans are dried and sent to Europe and North America. They are sold to a distributor who is responsible for roasting and export.

The low-grade beans stay in Colombia and are brewed into a sugary watery coffee called tinto sold all over Colombia. The Colombian coffee “revolutionaries” are trying to change that by introducing their quality bean coffee in Colombia. Juan Valdez cafes and chic coffee houses are popping up everywhere like Starbucks. But it is hard to get people to change what they have been drinking all their lives.

Food  Rules I Have Learned While Traveling.

“Travelers never think that they are the foreigners.’  ~Mason Cooley

You can eat sushi with your hands.

Sashimi is always eaten as a first course before sushi. You can’t eat sashimi with your hands.

Don’t eat anything with your hands in Chile.

Always keep your hands above the table in Mexico.

Eat only with your right hand in Egypt. (This is true for many Middle Eastern countries) Salting your food is a huge insult.

Pad Thai is always eaten with a fork and a spoon. Thai people eat most of their food with a spoon in their dominant hand and a fork in the other. Chopsticks are only served for soup.

Pasta is not a main course.

In Uganda, eat fried grasshoppers with your hands like chips. In Mexico eat them on a taco with guacamole and cheese. In Thailand eat them on a stick. In Burma, peel off the head and wings and gulp.

In Burma, they say that anything that walks on the ground can be eaten.

Margherita Pizza is really the only thing Italians consider pizza and should  be eaten with a knife a fork.  The pies are usually served unsliced. It is not a hard and fast role like never cut your spaghetti with a knife and fork.

In Mexico, never eat tacos with a knife and fork.

In France, don’t eat the bread before the meal.

Never turn down vodka in Russia or tea in Turkey.

In France, eat frogs legs like you would eat fried chicken –with your hands in a casual setting, with a knife and fork in a formal restaurant.

In Kenya drinking cows blood mixed with milk is a special treat.

Chinese people do not eat fortune cookies for dessert but oranges for good luck.  It is illegal to eat an orange in a bathtub in California.

In China you are expected to leave a small amount of food uneaten on your plate. If you finish everything, you are sending the insulting message that not enough food was served to you.

In Singapore gum chewing is illegal.

In Mexico Men make toasts, women do not.

In Russia, Do not drink until a toast has been made.

In Armenia, if you empty a bottle into someone’s glass, it obliges them to buy the next bottle.

In restaurants in Portugal don’t ask for salt and pepper if it is not already on the table. Asking for any kind of seasoning or condiment is to cast aspersions on the cook. Cooks are highly respected people in Portugal.

Eating from individual plates strikes most people in Ethiopia as hilarious, bizarre, and wasteful. Food is always shared from a single plate without the use of cutlery.

In Japan it is acceptable to loudly slurp noodles and similar foods. In fact, it is considered flattering to do so, because it indicates that you are enjoying the food.

Do not eat fugu from  an unlicensed chef. The Japanese pufferfish, or fugu, is a delicacy in Japan. It’s also potentially one of the most poisonous foods in the world, with no known antidote.  Japanese chefs train for years to remove the deadly portion of the fish before serving it, though generally the goal is not to fully remove it, but to leave just enough of a trace to generate a tingling sensation in the mouth, so the customer knows how close he came to the edge.  This was one of my best meals in Japan and I have lived to write this.

At this moment,  someone is making a food etiquette mistake.