“I am not a glutton. I am an explorer of food.” Erma Bombeck

We arrive in Belem on a small plane from the island of Marajo at the mouth of the Amazon.

I thought I was afraid of small planes.

But the flights were smooth and the scenery was spectacular. 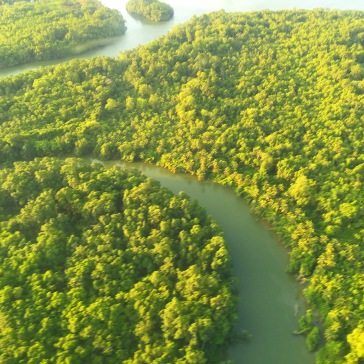 We started our visit  with lunch at La Em Casa. http://www.laemcasa.com/ It is located in Estacao Das Docas mall a remodeled train station with a beautiful river view.. There is a buffet lunch serving all the traditional dishes.

The restaurant was started by Anna Marie Martins and it was her son Paulo who brought attention to Brazil, South America and the world about the quality and flavors of regional Amazon cooking. His daughters Joanna and Daniella continued the tradition. Daniella works as a chef in the restaurant and Joanna runs the Paulo Martins Institute and Ver o Peso of Para Food, a festival (Feria Queso)l promoting the flavors and cooking techniques of the Amazon. Joanna is interested in having chefs come from all over the world so any who are reading this should contact her. You won’t be disappointed and you will learn a lot. Its a great time for all foodies to start their visit to the Amazon. contato@institutopaulomartins.org.br  I was lucky to meet both of them and saw how passionate they are about the world getting to know their delicious food. At the rate they are going, we will all soon be eating tucupi and jambu and loving it.

After that huge lunch we had to try the ice cream at the most famous ice cream parlor in the country,Cairu because there is also a branch in the Estacao Das Docas mall. sorveteriacairu.com.br/ There are Amazonian flavors made from local fruits such as bacuri, muruci, sapoti, graviola, and açai, and“mestiços” (mixed breeds) such as carimbó (cupuaçu and Brazil nut) and maria isabel (bacuri, shortbread, and coconut). The ice creams are so good that five-star restaurants in Rio and São Paulo proudly feature them on their dessert menus.

Among the many fish we ate in the Amazon region, are filhote and pirarucu. Filhote is the main ingredient in peixada, a stew that includes potatoes, tomatoes, garlic, and cilantro.  (from La Em Casa)

Pirarucu is Brazil’s largest fish, measuring up to 2.5 meters (8 feet) and weighing up to 80 kilograms (176 pounds). It is usually dried and salted before being grilled on a hot tile or cooked in coconut milk, and then served with farinha and light, buttery feijão manteguinha,  (from Romanso do Bosque)

It is an outdoor market selling Amazonian products with about 2000 stalls on the Amazon River.

The unusual name of the Ver-o-Peso Market dates back to colonial times, when the market housed the offices of the Portuguese colonial tax collector. 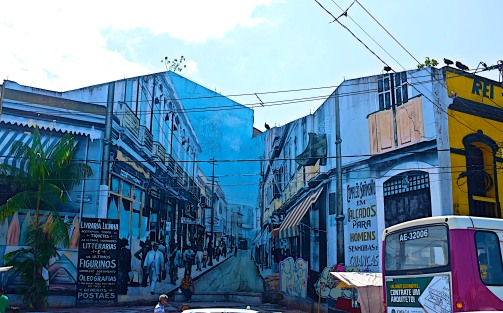 Ver-o-Peso is a shortened form of the Portuguese phrase “Haver-o-Peso” meaning “possess or obtain the weight.” The tax collector was charged with collecting a tariff on all goods coming down the river  based not on monetary value of goods but on their weight. It is now a Unesco World Heritage site. (cleaning off the fish smell as vultures fly overhead)

There are things you know like acai berries and brazil nuts and wealth of produce from the Amazon that is sold nowhere else in the world. (acerola berries)

if you’re a fan of large, oily, and irresistibly rich Brazil nuts, you’ll find them all over in Pará, where they’re known as castanhas-do-Pará, and are sold — plain, salted, or caramelized — by vendors on the streets of Belém. 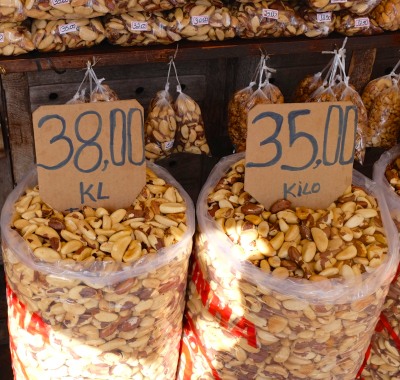 Wait until you smell and taste them, which you can do in forms that include juices, compotes, jellies, cremes, puddings, liqueurs, and sorvetes. 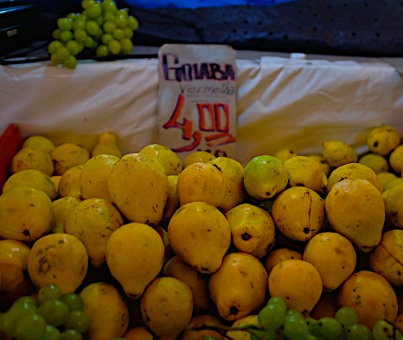 There are herbs that cure everything and many types of natural viagra, different cachacas (Brazil’s liquor used in caipirinhas) and all kinds of stuff used for religious and spiritual ceremonies that look fascinating. 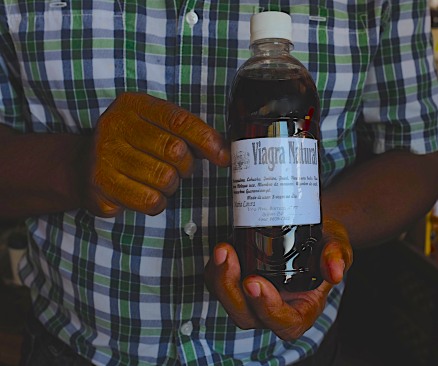 I could have spent a lot of time with the herb ladies and in those questionable spiritual ceremony stores. 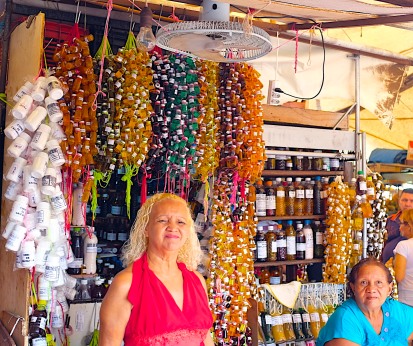 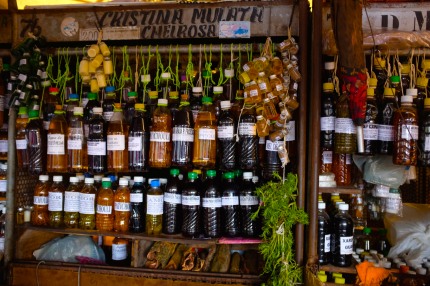 Who knows what I would have brought home if I spoke Portuguese?

We take a ride through the jungle up the Guama River. 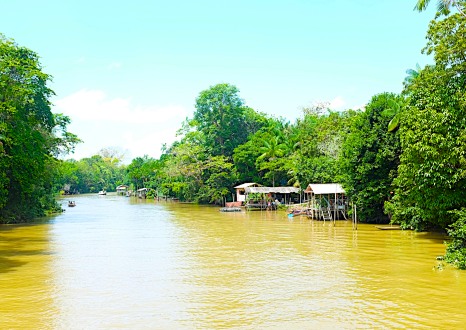 We are headed to the island of Combu where Dona Nena harvests cacao from trees on the island and makes chocolate wrapped in banana leaves and chocolate drinks with carnation milk (my fav).

Everything is laboriously and lovingly done by hand – a far cry from the Hershey factory in Pennsylvania I visited as a kid. (cacao)

While most of the families living on the jungle river make their living harvesting acai and brazil nuts, Dona Nena is bringing back the ancient way of making chocolate and the chefs in Brazil can’t get enough. 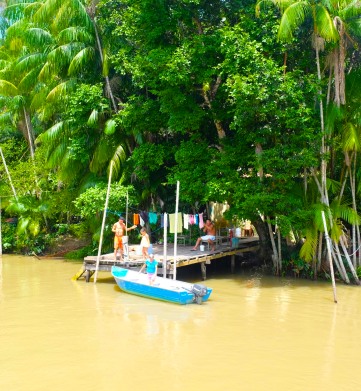 It’s delicious and not too sweet – just the way I like it. Brazilian designer chocolate from the Amazon – why not? 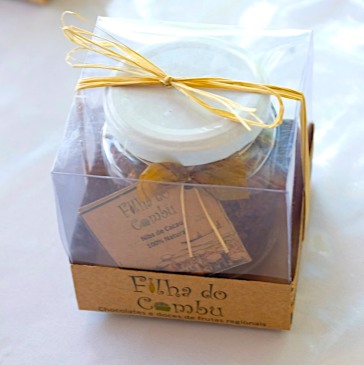 One of our dinners was at Romanso do Bosque which is an inviting beautifully designed restaurant. http://www.restauranteremanso.com.br   Indigenous ingredients and traditional Brazilian cooking combined with new ideas was the basis for an interesting tasting menu. Chef Thiago Castanho’s modern take on ancient flavors was creative and delicious. By then, I was starting to recognize the flavors of the Amazon. I tasted the jambu in the tucupi and honey sauced pork sausage (not normally being a meat eater, I loved that one)

There were shrimp covered in tapioca, balls of fresh fish, smoked Pirarucu and filhote. 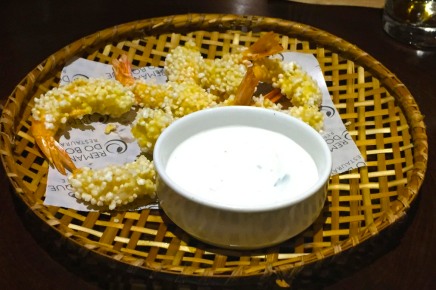 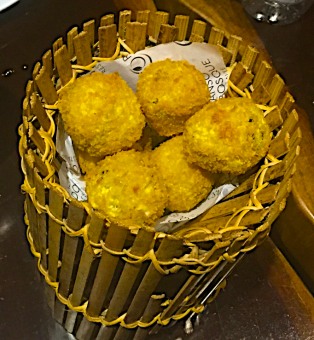 There were two desserts. The first was tapioca, tapioca ice cream and brazil nut sauce. 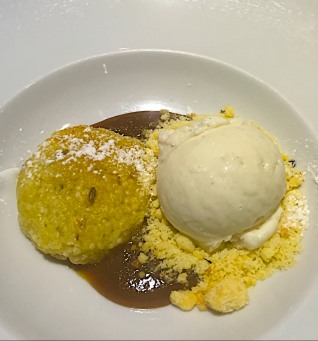 When I couldn’t eat another bite, they brought this. I didn’t even ask what it was but I finished it.

2 thoughts on “Belem Part 2 – More Food In The Amazon”