“I wondered about the explorers who’d sailed their ships to the end of the world. How terrified they must have been when they risked falling over the edge; how amazed to discover, instead, places they had seen only in their dreams.” Jodi Picoult

The heat in Cartagena gives it a sleepy feeling which kind of makes it okay to sit on the wall, browse through shops and street vendors, buy fresh fruit from a woman carrying it on her head and not go to a museum.

The city was founded in 1533 and was the main South American port for the Spaniards. They stored treasures pillaged from the indigenous people in Cartagena to ship to their homeland. Silver, gold, cacao beans, chile peppers and tobacco from the new world were shipped to Spain. Cartagena was a marketplace for slave ships coming from Africa. It was probably the most looted port in the world. As a result of constant pirate attacks, the Spanish built a solid wall to surround the town to protect their valuables. It was built during the sixteenth to eighteenth centuries and is the only walled city in the Americas. It took more than two hundred years and fifteen million African slaves to build the wall.

The main fortification was the Fort of Castillo San Felipe de Barajas (named after Spain’s King Philip IV) which is located on a 130-foot-high hill towering over the city. Originally built in the mid-1600s, it was rebuilt and enlarged several times over the years to become the greatest fortress Spain ever built in the Americas.

Las Palenqueras are the famous fruit basket ladies you see around the walled city. They come from San Basilio De Palenque which is an hour away from Cartagena. 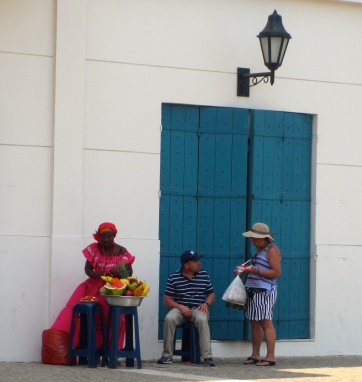 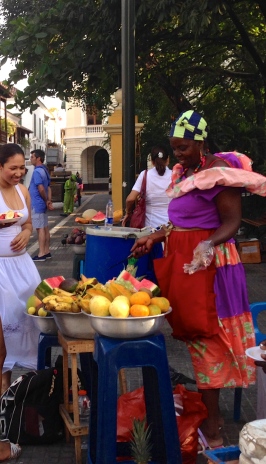 These women are the descendants of South American slaves and San Basilio De Palenque was the first city in South America of free slaves. Las Palenqueras keep their African culture and traditions.

The food market in Cartagena is hot and dark with a lot going on. The smell hits you. It is a mixture of sweet smelling fruit, fish smelling fish, raw meat and live birds.

The thing I always notice in these markets is that they use every part of the animal and the parts are all there to buy. There are always flies and fast-moving, knives, machetes and hammers. 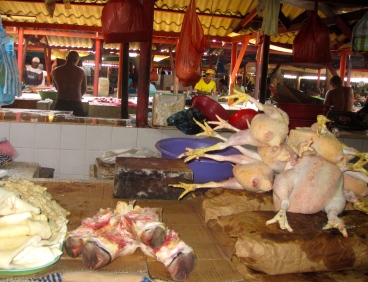 Tables are filled with all the local fruits and vegetables. I eat delicious tamarind from the pod. I have never seen a raw one before. (tamarind)

Everyone is moving quickly carrying a lot on their heads or in their arms. It is a market for locals and you can buy anything from toiletries to clothes as well. I bought flip-flops.

La Boquilla is a poor fishing village twenty minutes outside of Cartegena. (poor but happy)

It is a peninsula at the end of a beach with the Caribbean Sea on one side and a lake with mangroves on the other.

The guide takes you on an old canoe through mangrove tunnels with flocks of birds and fishermen fishing for crabs ,shrimp and small fish. 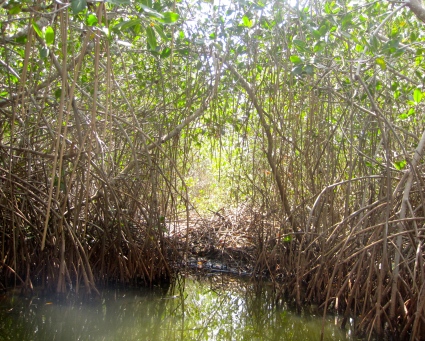 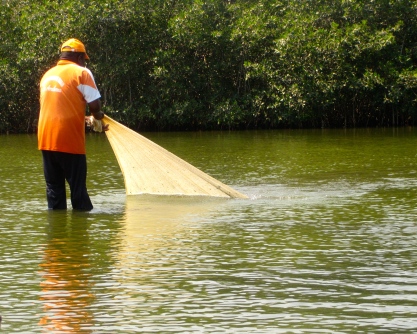 After the canoe they pull out a fresh coconut and make a hole for a straw with a machete. When you finish the water they quickly open it up and slice up the meat. It was clearly not the first coconut they’ve opened with a machete. It feels very far away from Cartagena. 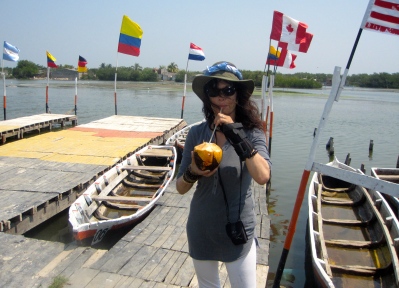 Then I walk for a long time with my feet in the Caribbean sea. I have lunch on the beach of fresh fish, plantains and coconut rice. 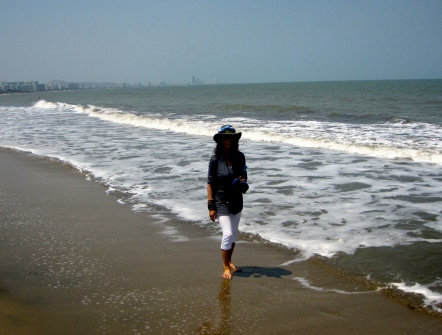 Day and night the sound of clip clopping horse and carts carry tourists around the city. I prefer to wander around and walk the walls at dusk. 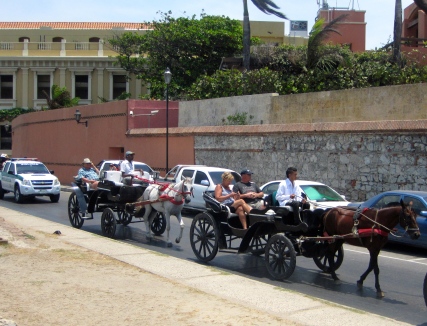 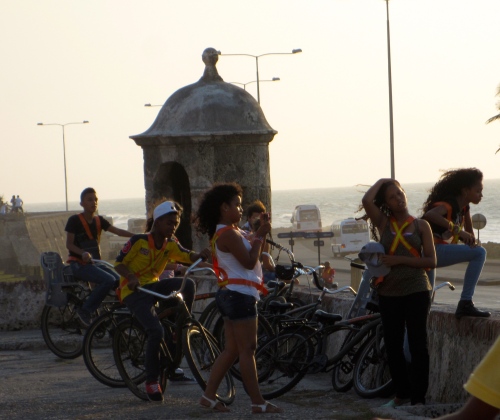 Gabriel Garcia Marquez became a writer in Cartegena. His novel Love in The Time Of Cholera Is set here. It is one of my favorites. I see Fermina riding in the horse and carriages and Florentino wandering everywhere in despair. 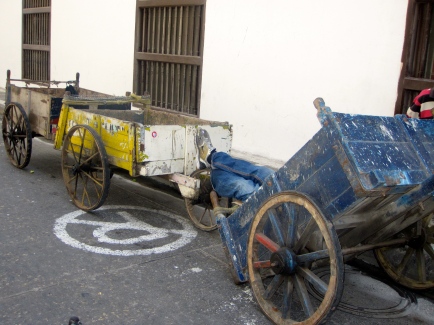 You can see how much of Cartegena is in his books. Garcia Marquez or Gabo died a few days after I returned . But now I can picture him  sitting in La Vitrola, Café Havana or in a square in Cartegena writing his stories. ( a person standing in front of Gabo’s house, some famous characters from another author play chess in the square) 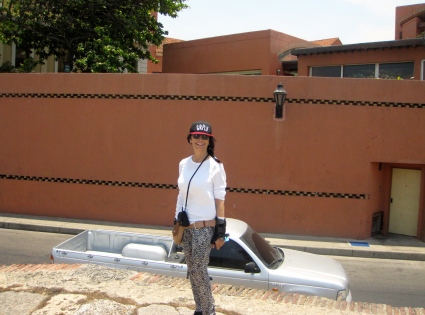 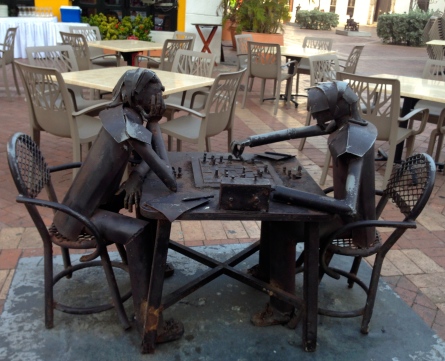 Thank to Jose and Kevin Rodriguez for their kindness and knowledge of a city they love. 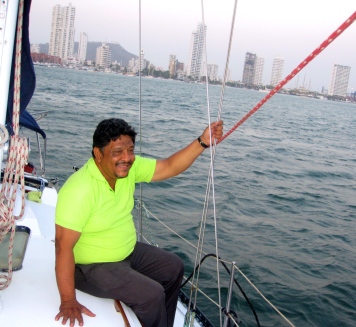 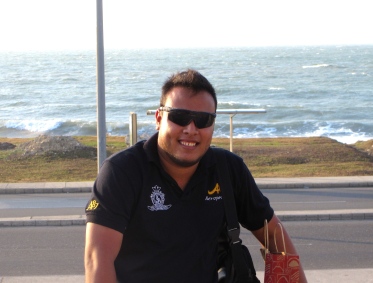 Colombia is now one of my favorite places. One of my best trips happened because I said yes to something I never thought I would be doing alone. Thanks Jeannine Cohen from Geox for planning this wonderful adventure.