All Roads Lead to Ephesus


Ephesus is considered  to be one of the great outdoor museums of Turkey.

Heraclitus was born in Ephesus.

The Odeon doubled as a concert hall and a meeting place ( the Senate). It was built by   a wealthy couple in 2 AD. It seats 1500 and probably had a roof since there is no drainage.

Toilets in Ephesus were side by side with no partition. Slaves sat on them first to warm them up for their masters.

The Celsius Library in Ephesus with 12,000 scrolls,  was the third largest library in the ancient world,  after Alexandria and Pergamon.

The first church dedicated to the Virgin Mary was in Ephesus. The Virgin Mary lived her last years in a cottage near Ephesus. Many Popes have visited her house. It is one of the Seven Churches of the Apocalypse.

Before it was a Roman city, Ephesus  was an ancient Greek city of Asia Minor, near the mouth of the Menderes River, in what is today Western Turkey, south of Smyrna (now Izmir). One of the greatest of the Ionian cities, it became the leading seaport of the region. Its wealth was proverbial. The Greek city was near an old center of worship of a native nature goddess, who was equated with the Greek Artemis.  In 550 B.C., a large temple was built.

The Temple of Artemis at Ephesus (Artemis (Diana) is very popular and has many temples) is  one of the Seven Wonders of the World. It covers an area as big as a soccer field but today has turned into a swamp.  There is one remaining column and you can only see the ruins of the foundations of this marvelous construction of the Hellenistic Age. It was  made of marble and full of sculptured columns, capitals and shafts. It was twice the size of the Parthenon in Athens.  The most beautiful  ruins that remain of this temple are  exhibited today in the British Museum in London. You can find it in the Hall Of The Stolen Goods.

The statue of many-breasted Artemis was the symbol of the temple but also of abundance, hunting and wild life. The genuine statue of Artemis, removed during the fire, is  exhibited in the Selcuk Museum in Turkey.  Many copies of this statue found during the latest excavations date back from the Roman period.

The first advertisement of the antiquity, which shows the way to the brothel, is on the Marbel Street in Ephesus.

The Grand Theatre in Ephesus has seating capacity of 24,000 people.

Ephesus is the best preserved classical city of the Eastern Mediterranean, and among the best places in the world enabling one to genuinely soak in the atmosphere of Roman times. 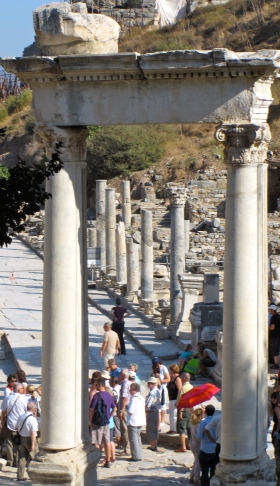 Ephesus  was once a seaport and  is now located  6 miles away from the sea.

Ephesus was discovered in Selcuk, Izmir in Western Turkey.

Some scholars estimate the number of people living at Ephesus to have exceeded 250,000 inhabitants during Ephesus III.  This  would make it perhaps the fourth largest of its day behind:  1) Rome;  2) Alexandria; and  3) Antioch. 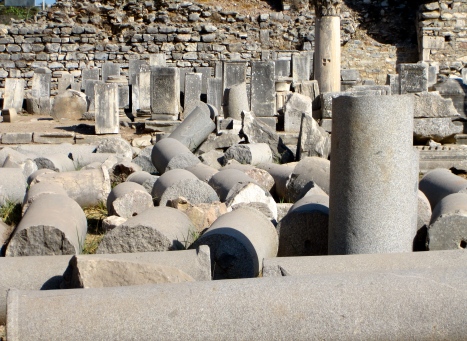 Sign at Ephesus – Personally, I think all children need attention.

Ephesus terrace houses are located on the hill, opposite the  Hadrian temple.  They are also called  “the houses of rich“. They tell a lot about family life during the Roman period. 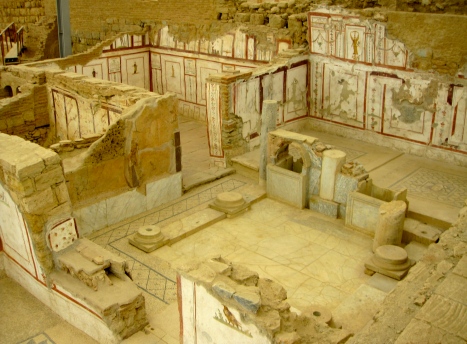 There are six residential units on three terraces at the lower end of the slope of the Bulbul Mountain. The oldest building dates back to 1 BC and continued in use as a residence until  7 AD. The excavations of the terrace houses started in 1960.

Ephesus Terrace Houses are covered with protective roofing which resembles Roman houses. The mosaics on the floor and the frescos have been consolidated and two houses have been opened to the public as a museum. 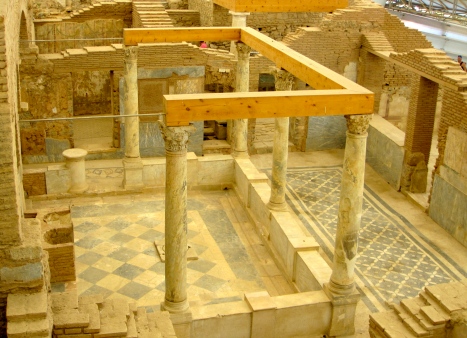 They had interior courtyards (peristyle) in the center, with the ceiling open.. On the ground floor there were living and dining rooms opening to the hall, and upstairs there were bedrooms and guest rooms. 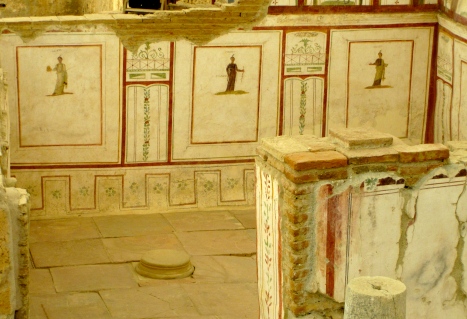 The heating system of the terrace houses were the same as that in the baths. Clay pipes beneath the floors and behind the walls carried hot air through the houses. The houses also had cold and hot water. The rooms had no windows, only illuminated with light coming from the open hall, so that most of the rooms were dim. 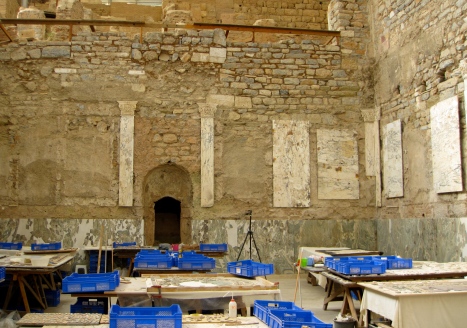 An ancient Roman cat  is guarding the ruins.

Heraclitus is right.  it is my second time in Ephesus. I was there in my early twenties. They have done a lot more excavation. i am a lot more interested in it now.  I  have changed also.

1 thought on “All Roads Lead to Ephesus”