“Nothing comes as an accomplishment instantly. Success does not come overnight. Patience is the key! Grow up and be the tree; but remember it takes dry and wet seasons to become a fruit bearer, achiever and impact maker!” Israelmore Ayivor

It seems like there are more fruits in Colombia than days of the year. I have never heard of most of these fruits.  All of them are delicious. Here are a just a few.

Guanabana (my new favorite fruit) It is a large green fruit covered with soft thorns.   The inside is a white fleshy substance with black/brown seeds. The flavor has been described as a combination of strawberry, sour pineapple and banana. The Guanabana tree is a  natural cancer cell killer 10,000 times stronger than chemo. (the white juice is guanabana) 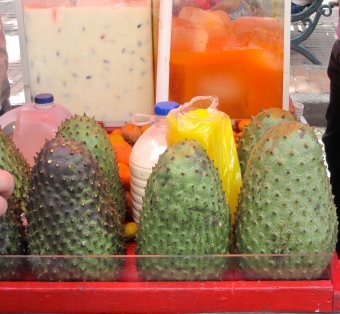 Lulo (I love this juice) It looks like a small orange tomato. It has a citrus taste. It is usually served as a juice because the fruit has too strong a flavor to eat.

Tree Tomato (Tomate De Arbol) It looks like a tomato but tastes like tomato and kiwi or passionfruit. The skin is bitter so it is usually made into juice or served with cinnamon. 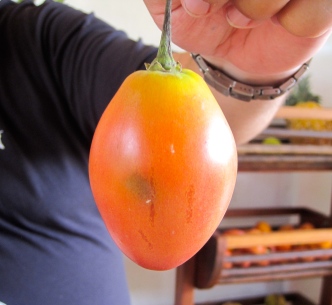 Uchuva It is a tangy creamy berry. It is sweet when ripe but can also be very sour. I brought back some uchuva jam.

Carambola – Star Fruit It tastes like a grape with citrus and apple.

Guama This is the strangest. fruit I have every eaten. It is a pod, like carob or tamarind filled with a sweet cotton like flesh. The seeds are a lot like slippery watermelon seeds but bigger. When you squeeze them between your fingers they shoot out. The Colombian saying “como pepa de guama” (like a guama seed), is used when someone or something leaves very quickly

Maracuya -Colombia has a few different varieties of passionfruit. This is the most common variety. It You cut it in half and scoop out the sweet insides which are full of small seeds.

Granadilla is yellow with a stem.This is a round, orange passionfruit with crunchy blue seeds. It’s much sweeter and milder so it  is better to eat it alone and not as juice.

Nispero This fruit is oval or pear-shaped. The nispero is ripest and sweetest when orange, though some prefer it crisper and tart in the light brown stage. It’s got an apple – chocolate – strawberry flavor 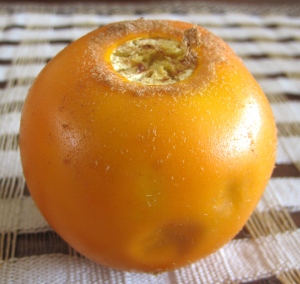 Pitayas (Dragon Fruit) You may know those bright pink dragon fruits so popular in Asia. These are a little different. They have the same spiky exterior except they are yellow instead of pink. Inside is also similar: white with tiny black seeds, but the taste is not as sweet 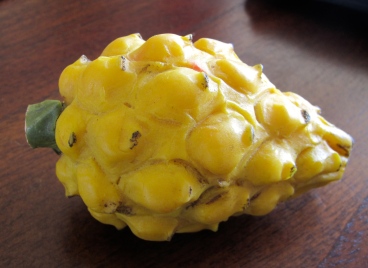 Also there are sweet creamy avocados the size of your head and bananas in all sizes  and levels of  sweetness. 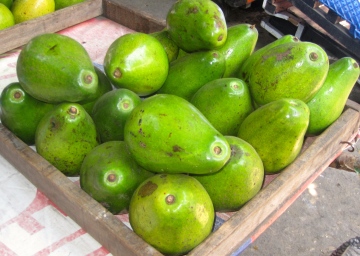 If you aren’t eating something deep-fried in Colombia, you are having something delicious with strange fruit. Yet when all the fruit is strange, the strange becomes the familiar.

Things That  I Have Learned In Colombia

“Once a year, go someplace that you haven’t been before.”  Dalai Lama

If you don’t come back from Colombia with your suitcase smelling from coffee, something is wrong.

Coffee plants in Colombia are not native to Colombia. Many of the plants come from Africa. 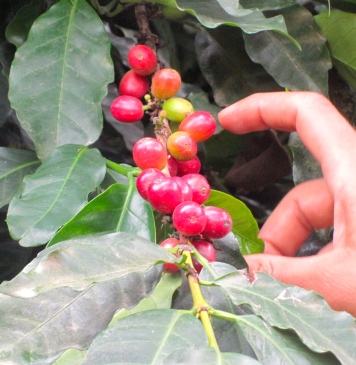 Juan Valdez is the Starbucks of Colombia not the man picking coffee beans for Folgers. (only people my age know what that meant) 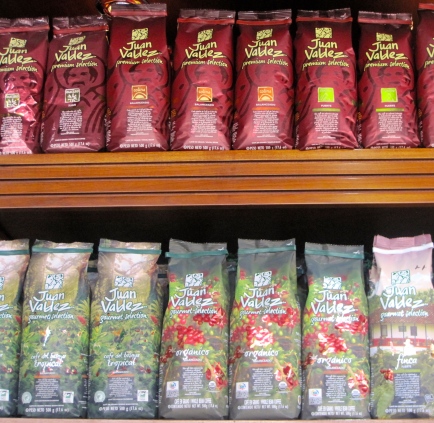 Colombia is not Disneyland but it isn’t downtown Beirut either.

There is always music. (Play and continue reading . It will sound like Colombia  – Gracias Kevin)

Colombia has the second highest number of public holidays in the world. Argentina has the first.

Colombians love Juanes as a humanitarian even if they don’t like his music.

Because of its location Colombia is “the door of the Americas”.

In Colombia you dunk cheese in your hot chocolate (my two favorite things together).

There is always fruit. 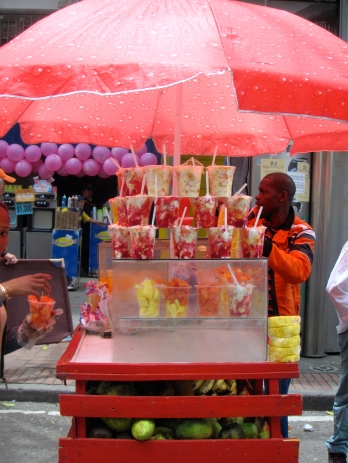 Colombia is the world’s second largest exporter of cut flowers after the Netherlands. About 1 billion worth of flowers are exported every year, mostly to the United States. People from the United States buy 300 million Colombian roses on Valentines Day. 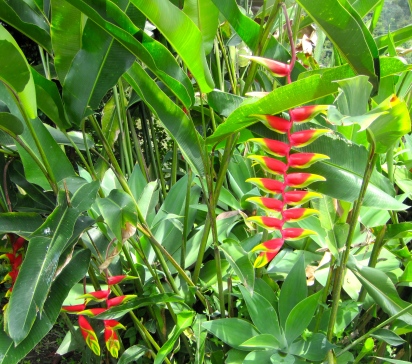 Colombia does not have seasons; because it is near the equator, it has sunlight throughout the year. Colombia is the only country in South America to have two different coastlines on both the Pacific Ocean and the Caribbean Sea. 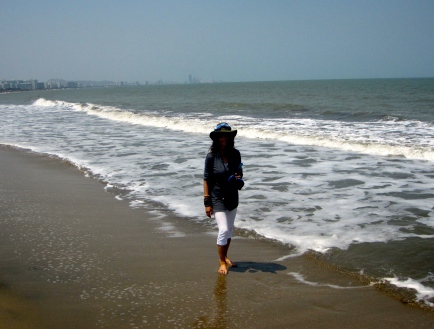 They still uses coca leaves in the rural villages and for the tourists. But it is not as easy to find as in Peru and Argentina.

You’re less likely to be kidnapped in Colombia than you are to be eaten by a shark in Australia.

12% of the world’s supply of coffee comes from Colombia which provides 20% of the government’s revenue. Only Brazil and Vietnam export more coffee.

According to someone from Ecuador at the airport, Colombians are the nicest South Americans. I would have to agree.

Colombia produces 60% of the world’s most expensive Emeralds.

In 1975, Colombian women were given the right to vote.

Colombians speak the clearest Spanish with the lightest accents, especially in Bogotá.

There are more fruits in Colombia than days in the year. Guanabana is my new favorite fruit. (Ice Cream, Dulce de Leche and Guanabana)

Shakira is from Colombia. The women are often voted the most beautiful in the world.

There is always juice.

The FARC was founded in 1964. Adopting an anti-U.S. and Marxist ideology. The group attracts the overwhelming majority of its members from the rural poor. Its aim is to overthrow the government. However, the government and the group have been making moves towards peace in recent years.

The decline and fall of the Colombian drug gangs has led to an increase in tourism. Medellin is still the capital of the cocaine trade but with Mexico taking over the American market, they are focusing on Europe and Latin America. Colombians are still often arrested in these countries for drug trafficking. Pablo Escobar never sold drugs to Colombians for consumption but today groups are targeting the outskirts of Colombia as well.

Colombian food is rich, diverse and delicious with a heavy focus on deep-frying.

Colombians do a lot of praying and a lot of crossing themselves. 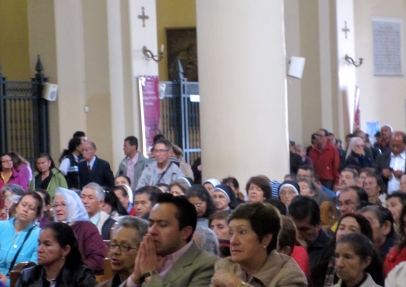 Colombia is the worlds third largest manufacturer of women’s lingerie.

The Colombian drink aguardiente means fire water and is 60 per cent alcohol. A party is not a party in Colombia without aguardiente.

The name Colombia is derived from the name Christopher Columbus.

Avoid sopa de madongo unless you like intestines , tripe and cow udders, Luckily I have already gone through which organs to avoid in Argentina. FYI they also make soup out of eyeballs.

Colombia has 84 different Indigenous tribes spread out across the country.

It is actually illegal to walk the streets in Colombia without I.D., but a photocopy will suffice in 99% of situations.

Colombia is my most misspelled country. In the past, I always spell it like Columbia the Ivy League University that I did not attend. I won’t be making this mistake again.

Colombia is one of my favorite countries in South America. I am already planning my return trip in my head.