The Police  Force is considered to be the most corrupt of governmental  institutions world wide. Fundamental systemic changes, including anti-corruption reforms, are needed in countries all over the world to prevent police abuse.

George Floyd’s death is the latest in a long series of brutal encounters between the American police and the people they are supposed to serve.

We need to make meaningful changes to address police misconduct.  When something calls attention to their faults (like murder), they implement change for a while. As public attention shifts and politics moves on, the police reform efforts eventually stop.

We need to get rid of qualified immunity. Qualified immunity is a judicial doctrine that protects officers who violate someone’s constitutional rights from civil-rights lawsuits unless the officers’ actions were clearly established as unconstitutional at the time.  Just throw it out and make them as accountable for their behavior as the rest of us are.  They have clearly abused that privilege.

Police officers should keep better records of what they do and how they do it. Why were they in a high speed chase down the freeway? Who got injured along the way? etc. They looked like an invading army during the protests and many instances of unnecessary brutality and meanness were reported. Was any of that investigated?

The most important thing to spend money on is better police training and screening. Train parking enforcement to deal with most traffic violations. Get rid of traffic cops.  If I get stopped outside of Beverly Hills and West Los Angeles, police act very differently. I did not need four officers with guns surrounding my new car because it didn’t have a front license plate at the time that law changed.  When I yelled at them for doing that and scaring my daughter (and me), they took forty five minutes, to write up the ticket. (Yes, I know what white privilege is but once I am in a non white neighborhood, they think I am Hispanic or Muslim).  Screen for psychological disorders, racial and  gender prejudice, homophobia, bullying, depression or violent, angry personalities. Get rid of stop and frisk and racial profiling.

Police see the worst of humanity, the most depraved, and they do so at risk to their own lives. I think they are so used to thinking everyone is a bad guy and might have a gun and kill them, that they lose their humanity.  They treat certain neighborhoods as war zones and seem to forget human beings live in them.

Police are rewarded  for “collars” (arrests – yes I’m obsessed with watching Law and Order) and how many traffic tickets they give in a month. What if they got rewarded equally for people they helped and the kindnesses they did in a community? What if they got rewarded for the humane way they dealt with lawbreakers?  They seem to have a problem telling the difference between an African American man walking home from work or a student running  home from college and a criminal. So it is best if they find a better way of dealing with arrests. Make their pension not a guarantee but based on constant re – evaluation.

This “Blue Wall Of Silence” has to stop. This is the informal rule among  police officers not to report on a colleague’s errors, misconducts, or crimes, including police brutality. It has to be part of a new kind of training.

Somewhere during the quarantine of the corona virus and the protests against police brutality, an African American friend sent me a picture of her brand new grandson. We have to do better. We have to fix this and keep at it this time. No more slacking off when things quiet down.

Why Didn’t The Police Stop The Looting?

“Until you guys own your own souls, you don’t own mine. Until you guys can be trusted every time and always, in all times and conditions, to seek the truth out and find it and let the chips fall where they may—until that time comes, I have the right to listen to my conscience, and protect my client the best way I can.” Raymond Chandler, The High Window

In April 1775  Major John Pitcairn upon reaching Lexington and finding the colonials, in what he perceived to be an “unlawful armed assembly,” ordered the colonials assembled  to “Lay down your arms, you rebels, and disperse!” He was “reading them the riot act.”

In England before the American Revolution, almost all felonies were punishable by death. That is  no longer the case. Crimes such as theft, burglary and robbery no longer carry the death penalty, and are generally punished by imprisonment or by some form of probation.

The death of George Floyd, a black man suspected of passing a suspicious $20 bill at a grocery store in Minneapolis by a police officer was inhumane and also illegal. It set off protests, looting and riots across the country.

Experts say that looting is a side effect of the condition causing the protest. But this time in Los Angeles, it looked different. Splinter groups broke off from the peaceful protests and began rioting and looting.

There was a lot of twitter chatter about going to Beverly Hills to loot. The footage was disturbing, It looked like criminals with hammers and kids of all races who had been in the house too long and were laughing at the smashed  windows, taking photos and grabbing stuff. It was like a release valve had opened up. No police and no parents. “Where are the jewelry stores?” was heard throughout the video.

I can’t speak for the whole country because this time I watched Los Angeles News. In the Fairfax Melrose area, certain stores were targeted and then it became a mob mentality, free for all of looting and fires.

The looting of Downtown, Santa Monica and Long Beach was even more disturbing. It went on for a long time and there was definitely the realization that no one was going to stop them. It was organized with cars circling the areas and people running in and out of the stores and cars.

We received an email that a protest in Venice on a main shopping street was being organized by looters and the one on the beach was organized by protestors.

Small businesses shouldn’t have to pay for the anger caused by the police. We all support the protest. The business owners quietly cleaned up the glass and opened their doors with sparse merchandise  to empty streets. Their businesses were already pummeled by the corona virus. We don’t know how many of them (us) will recover from all of this. Please support small businesses in your neighborhood. They need your help now.

It looked like the police did not want to put themselves in harm’s way or to hurt someone else over loss of property. The police backed off and let the looters have at it. After all, it was only someone else’s property or livelihood that was destroyed or stolen.

“Race doesn’t really exist for you because it has never been a barrier. Black folks don’t have that choice.” Chimamanda Ngozi Adichie, Americanah

I really believed the world was getting better with prejudice and racism. It looks better than the world of my childhood. Change is slow.

But I’m wrong. It is not only these isolated, violent incidents that has made me sit up and take notice. Traveling, having friends and now family with different skin color has forced me to re-examine my beliefs. My hope is that our life experiences are universal now, but they are not.

I believed that having a black President had changed things. I wished my mother who volunteered for Dr King could have seen this. But the hate it unleashed, which continued to be fanned by the  president we have now, is frightening.

Those of us who ”don’t see color” (because we don’t have to) are forced to when we see a photo of a white cop killing a black man for no reason. George Floyd joins an ever-growing list of Black names who died unnecessarily while police performed their ostensible mission of protecting their community.  It’s a list of names too long to fit on this page. Each of whom was a person, with loved ones, dreams, and lives to be lived.

The photos of the people wearing masks while they are rioting or protesting, in the middle of a dangerous pandemic, makes me believe we have hit rock bottom. We seem to have a president who doesn’t care about our health or our safety.  Maybe we have all had enough. Maybe we can finally start to see what is really wrong in the world and can begin to change it. The path toward justice is always long and hard. We continue to fight for what is right no matter how bleak it seems, because that is what good people do. 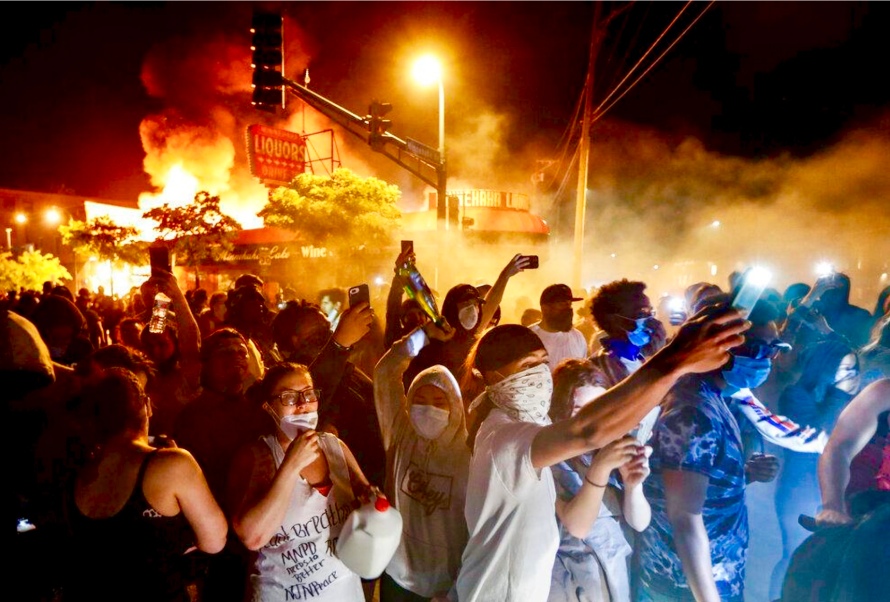 PS. A family member’s business was broken into and badly looted tonight. Another family member was locked in their store watching burning police cars and the looting of neighboring small businesses.The videos were disturbing. Young  people – black, white, Hispanic and Asian were breaking windows, laughing, taking selfies and looking for the expensive stores. They were carrying shopping bags not protest signs. Looters are not protestors. Looters take advantage of a situation for personal gain.They are not looking for justice. They are looking for free stuff.