“bathroom: (n.) where Americans go to argue about gender while the country goes down the toilet.” Sol Luckman

I have many looking for a bathroom around the world stories.  They go from pantomiming the activity in Budapest to walking into the wrong one because I couldn’t read the sign in Russian, Japanese, Cambodian….The list goes on once you leave the tourist areas in many countries. The  door drawings were confusing in Parety, Brazil and Bogota, Colombia. The hallway was dark in Santorini Greece and Lisbon, Portugal. I am often in the wrong one.

There are squat toilets in Asla, buckets in the jungle, holes  in the ground  in places you wouldn’t expect, but that is probably a different blog. i have strong legs for this reason.

I thought bathroom was a universal word like taxi until I started traveling.  My rule of thumb is if it’s a single unit bathroom, I can use either.  I prefer the women’s only because I’m not a fan of the urinal in the men’s bathroom and I stay as far away from it as possible. It never looks clean. Why do they have two things in theirs?  They don’t at home. Sometimes I choose the bathroom based on toilet paper, cleanliness, smell or lack of.

Doesn’t everyone just use the empty one? Can we all agree that any one-person, private restroom can (and, I’d argue, should) be a gender neutral restroom? It basically already is. Use whatever sign you’d like, or just do it the British way and put W.C. on the door. I believe it stands for “Who Cares? (US) 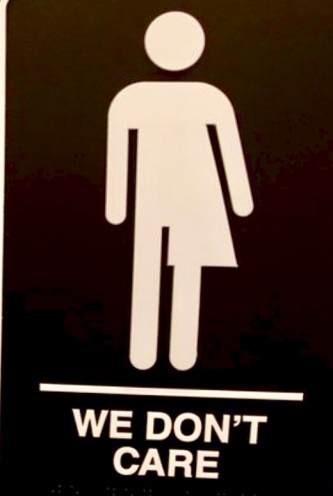