The Last Rabbi Of Piotrkow, Poland

“Summer came. For the book thief, everything was going nicely. For me, the sky was the color of Jews.” Marcus Zusak The Book Thief

It is hard to visit a place where a war has thrown your family into chaos and left many of them dead – even if you had not been born, yet. Rabbi Amichai Lau-Lavie’s grandfather was the last rabbi of Piotrkow. We stopped there with him on our way to Warsaw.

The Great Synagogue of Piotrkow, was built in 1793 after thirty years of planning. It was a famous site in Poland. The synagogue was severely damaged by the Nazis and serves as a public library today.

We saw the remains of a polichrome wall painting of the Torah ark, riddled with bullet holes.

We met with  Polish teenagers from a  high school Jewish studies program. Most of them had not met Jews before.

Amichai tells them that his grandfather was Piotrków Trybunalski’s last chief rabbi, Rabbi Moshe Chaim Lau. Following the German occupation, Rabbi Lau was ordered by the German authorities to represent the Jews of Piotrków Trybunalski and carry out the German’s commands. The Jews were sent to the Pyotrkow ghetto and he tried to help them and organize life for them there. In October 1942, Rabbi Lau was deported to Treblinka with his congregation and murdered. He chose to stay with them. One of his sons was also on this transport and he too was murdered.  Rabbi Lau’s wife was murdered in the Ravensbrück concentration camp in Germany. Three of his children survived and immigrated to Israel after the Holocaust. Amichai read the story where his father writes about the last time he and his brother saw their father. They were five and sixteen years old. 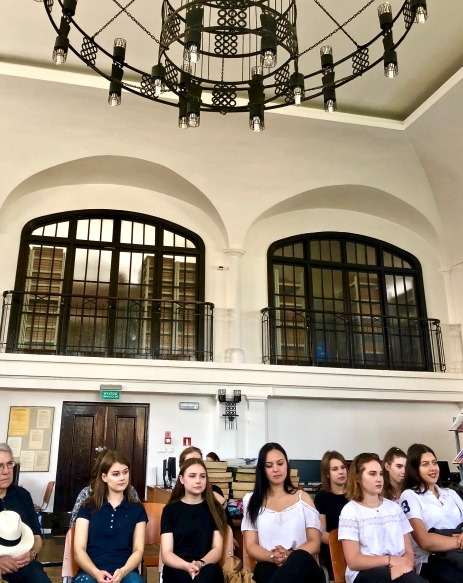 “For the first time in many months, my father approached me and kissed me on my forehead as I was sitting on the couch. A warm tear fell from the corner of his eye, landing on my cheek. “Let us follow the example of our patriarch Jacob, who arranged his family in preparation for the conflict with his hostile brother Esau. Jacob divided his family into three camps, hoping that at least one would survive,” this is how my father explained his plan for survival. Mother and our youngest brother, Israel-Lulek, who was five, were sent to hide with a neighbor, to wait out the hell-storm of the deportation. Father decided to send me and Shmuel to the glass factory. He imposed on himself the same fate as that of his community, to stand together with them, to be deported, to partake of whatever fate would befall them. “Just as a shepherd does not abandon his flock to a pack of wolves, so I will not run to save myself, abandoning my flock.” This is what he said regarding his decision to report for the deportation.” Naphtali Lau-Lavie,

When Amichai finishes his story about their survival, there is tense silence. Some of the kids are tearful. He did not tell his story to preach morality or to cast blame on those who only knew of the Nazi regime from history books.

He told it to transfer an optimistic message of hope and faith in humanity. The wish is to apply these lessons in today’s world to eradicate the racism and xenophobia that still exists in every society.

The students seem to want to understand the Jewish experience during World War ll. It’s important for them to know what happened. They also wanted to know how Trump got to be president and what it was like to live in Los Angeles. I always find that no matter where I am in the world, we are more alike than different.

I have to thank Amichai for bringing both his unique form of spirituality and his personal story to Poland.  I will always be grateful for your kindness and humility in helping us process the difficult things we were seeing.