Capoeira is a springy, close-to-the-ground style of kick boxing, with touches of karate and ballet. It’s more of a dance than a fight. You just get into a position where you could hit the other person if you wanted to. The idea is not only to out fight your opponent but to humiliate him with subterfuge, style, and attitude. 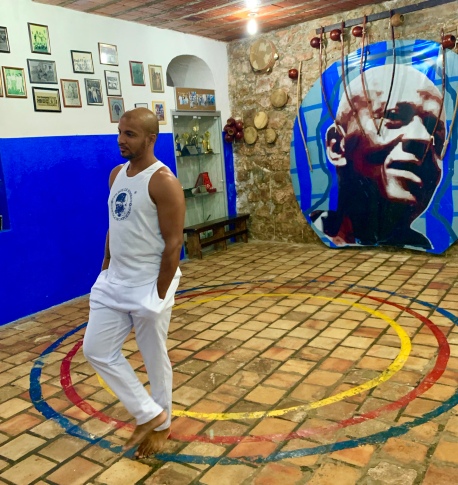 It was brought to Bahia by the African slaves hundreds of years ago. Learning how to fight was illegal for slaves, so they added in bits of dance and music so their masters didn’t get suspicious.  There is a mixture of different African dance moves in there as well. It became its own thing in Bahia and then it spread across the rest of country. The twang of the lute like berimbau accompanies the movements.

The first  capoeira school  was founded by Mestre Bimba in 1932 which was eight years before capoeira was finally made legal to practice in Brazil.

We were at the school where a capoeira master  demonstrated some of the movements.The Filhos de Bimba Escola de Capoeira (FBEC), is located in the historic centre of Salvador da Bahia, the Pelourinho. It was founded on June 10, 1986 by Manoel Nascimento Machado, known as Mestre Nenel. Mestre Nenel is continuing the work of his father – the famous Mestre Bimba.

Capoeira is a marketable commodity in Salvador. Many tourists come to take class and watch demonstrations. It definitely helps the economy.

Capoeira seems to be more about perfecting the ritual of the ceremony and performing it well, then actually winning. Wanting to win, not giving up and doing it better than you did before seems to be a lesson of capoeira and life.