“The places of quiet are going away, the churches, the woods, the libraries. And it is only in silence we can hear the voice inside of us which gives us true peace.” James Rozoff

There are nearly 100 churches in Salvador to explore and some are exquisite examples of colonial architecture. These churches help tell the story of the city, so wander around, visit some of them and hear their stories.

From the outside, Sao Francisco church seems relatively simple, but this eighteenth century church  shines on the inside—literally.

Ornate gilded wood carvings and paintings adorn much of the interior of the cathedral—from the pillars and archways to the vaulted ceilings—while golden foliage, angels, and birds decorate the altarpiece.

Nicknamed “The Golden Church,” São Francisco is also considered one of the best examples of the Brazilian-Portuguese Baroque style of artwork. 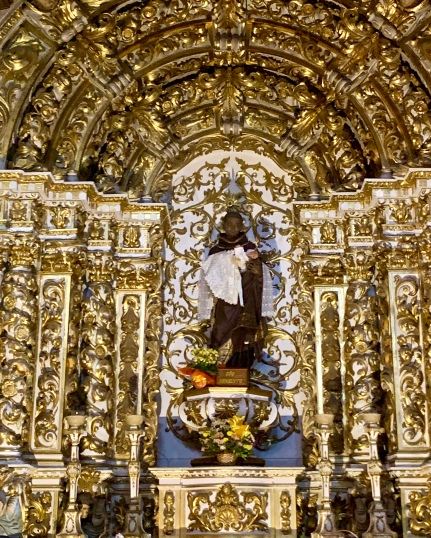 Of particular note here are the ceiling paintings in the entrance hall created in 1774 by José Joaquim da Rocha, and Bartolomeu Antunes de Jesus’ azulejo tiles that run along the lower walls of the main chapel depicting the life and times of St Francis of Assisi.

These tiles are particularly notable for their size (they’re much larger than traditional azulejo tiles), and stand out in contrast to gold you’ll find elsewhere. It is believed to be the wealthiest church in all of Brazil.

Our Lady of the Rosary of the Black People was the first church that African slaves were able to go to. They were not allowed to pray in any of the churches, and they really wanted to have a place  of worship. It took more than one hundred years for them to build it, and they worked mostly at night because they had to be on the plantations all day. I cannot imagine how difficult their lives must have been.

We are lucky enough to attend a party in the back of the church. 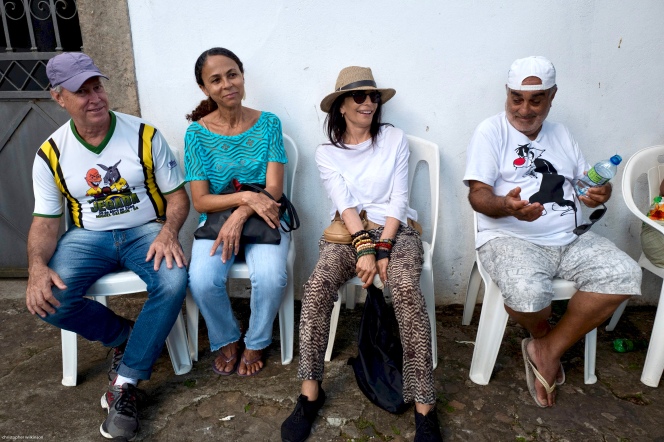 The party is in honor of Mestre Moa de Katendê—a capoeira master and advocate for Afro-Brazilians who was killed in a local bar  after saying he would not support then hard-right candidate for president, Jair Bolsonaro. 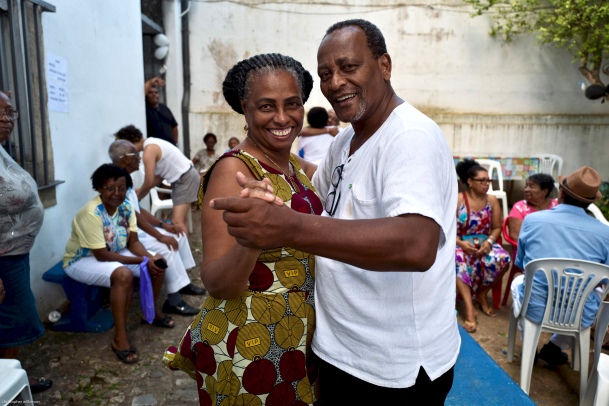 ,His daughter spoke and though I did not understand all the words, I felt her pain. The strength of the human spirit through adversity is really uplifting. 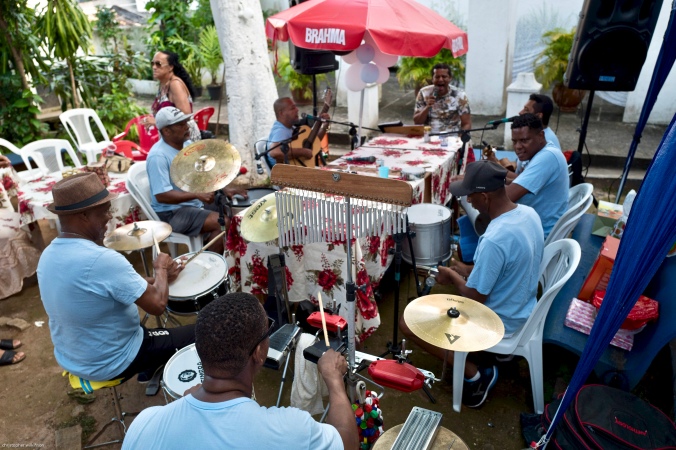 This is a street art painting near the church of her family.

The Church of Bonfim is possibly the most famous place of worship in all of Brazil. The simple white edifice built in 1754  has long been the juncture of Catholicism and the Afro-Brazilian Candomblé traditions. As in other countries ,enslaved Africans were forbidden to practice their own religion and had to adhere to that of their masters. As a result, Catholic saints and rituals became a cover for African ones. 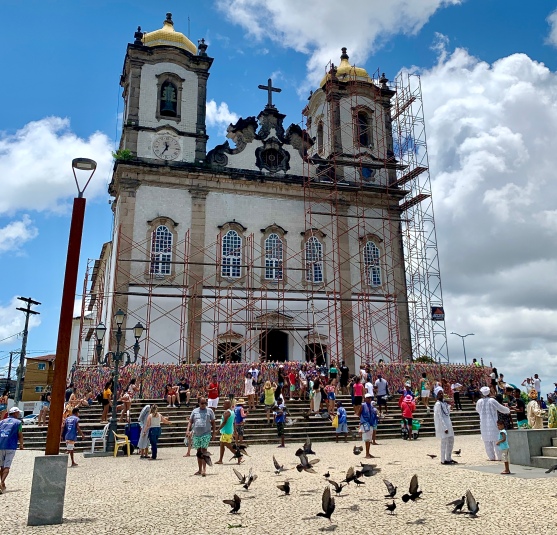 For many years people have left offerings, or ex-votos, to Nosso Senhor do Bonfim on behalf of the sick and the healed. In a room to one side of the church, wax body parts hang from the ceiling grouped according to which limb or organ they represent, while the walls are plastered with photos of people who are suffering or have been cured.

Outside the church and all over Salvador, people sell multicolored ribbons with ‘Lembrança do Senhor do Bonfim da Bahia’ written on them, which are often seen tied to railings in front of churches dancing in the breeze.Each color represents a different Candomblé god, and they are thought to bring luck.

Julia McNaught Da Silva was our wonderful guide in Bahia. She is smart, funny, super-organized and very knowledgeable about Salvador. It was a great introductory visit to the city and we enjoyed spending our time with her. T.hank you Julia, for a great time in Bahia.