“Future generations are not going to ask us what political party were you in. They are going to ask what did you do about it, when you knew the glaciers were melting.” Martin Sheen

This wasn’t supposed to be my first glacier experience.  In New Zealand, we drove for several hours  to Mount Cook. I was looking forward to taking a helicopter to the top of that glacier. I was ready. I had my crampons  which I lugged from Los Angeles. The next morning it was raining, windy, and very foggy. It was not the kind of rain that was going to clear up in an hour.  It was animals lining up in pairs rain. So we never made it to the glacier. 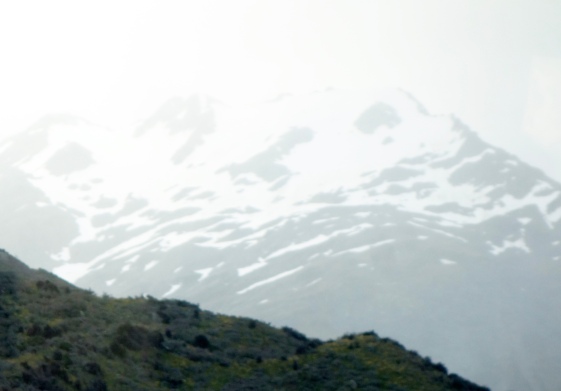 Iceland lingers on the edge of the Arctic Circle so I figured that my chances of seeing a glacier up close were better this time.  We start walking down the path and  groups of kids are walking by in clampons.

There is definitely an air of excitement. 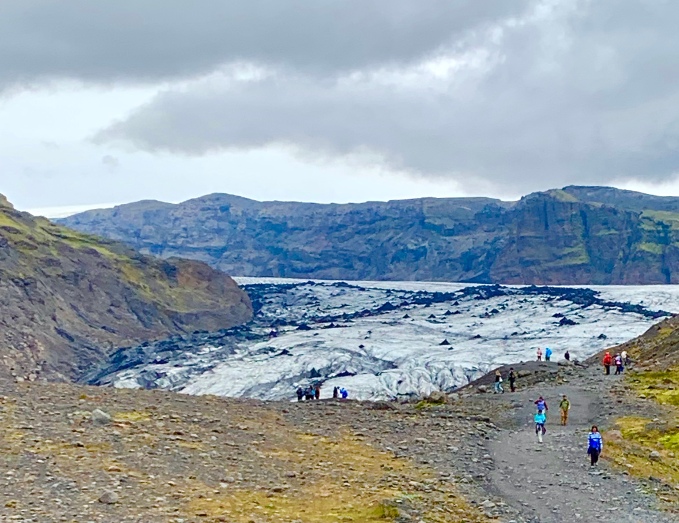 . There are many glacial walks and tours in Iceland on the different glaciers.We are at Sólheimajökull, a glacial tongue that is rugged and riddled with ice caves, ridges and sink holes. 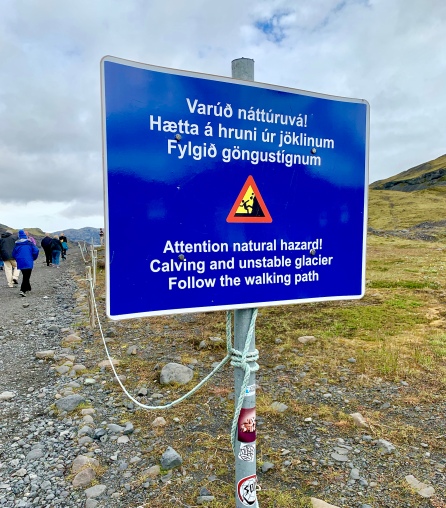 Blue ice and black volcanic rock appeared like a painting of colors upon the glacier with a matching grey sky.

It felt surreal. It was another can Iceland get more amazing moment.

I was enchanted by the barren beauty. It’s impressive due to the way it descends down from Mýrdalsjökull  (fourth largest ice cap in Iceland). Beneath its thick surface is one of the country’s most infamous volcanoes Katla.

Our geologist Scott Burns,  points out  the effects of climate change. People who don’t  believe in climate change say the ice melting is normal but the rate of change is speeding up since 1990 in a way that has not been seen before in history.

Sólheimajökull is shrinking rapidly. A glacier lagoon at its base reveals how quickly it is receding, the length of an Olympic swimming pool every year.

It seems like this is already an irreversible consequence of climate change, and it may be gone within decades. 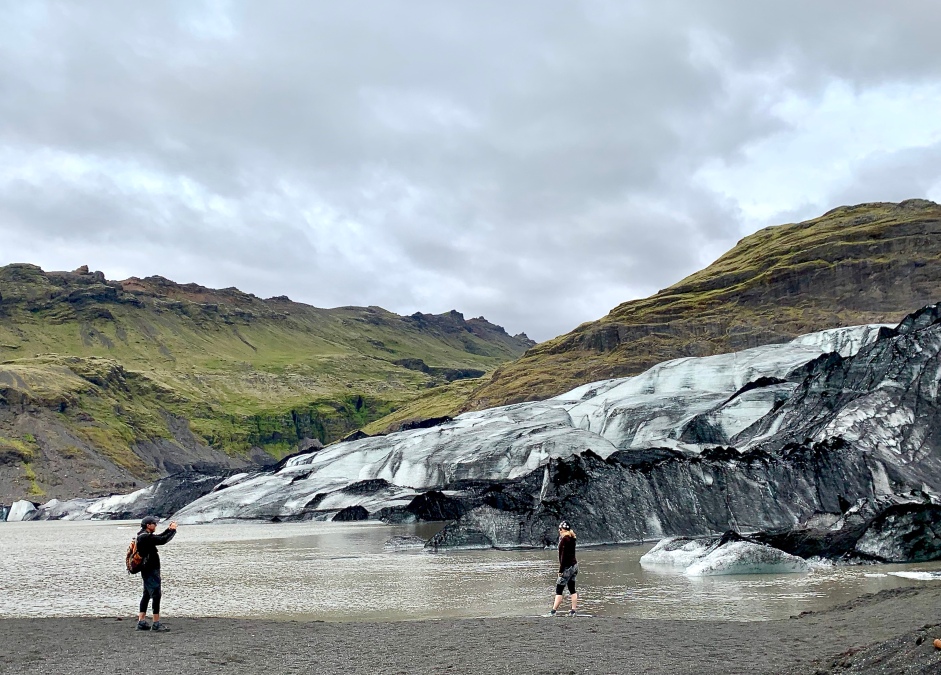 The next day we go to the new Glaciers and Ice Cave Exhibition at the Perlan Museum, just outside the city centre of Reykjavik  Here you can walk through the city’s first and only ice cave—a detailed replica of the inside of a glacier. If you think ice is all fun and games, the exhibition’s other interactive, ultra-modern displays present you with the more serious side of glaciers: the dangers of the volcanoes hidden beneath the ice caps, the effects of climate change and more.

Iceland”s glaciers are receding at an alarming rate. They lost their first one Okjokull and they created a memorial plaque to the glacier with a warning on it.

The future looks bad right now. We have exhausted our planet’s resources and polluted it beyond its capacity to clean itself. When they tell our civilization’s story, I want it to be that we cared and we tried our best to save it.