Check into Hotel Urso – a boutique hotel in the center of Madrid in the trendy Chueca district. 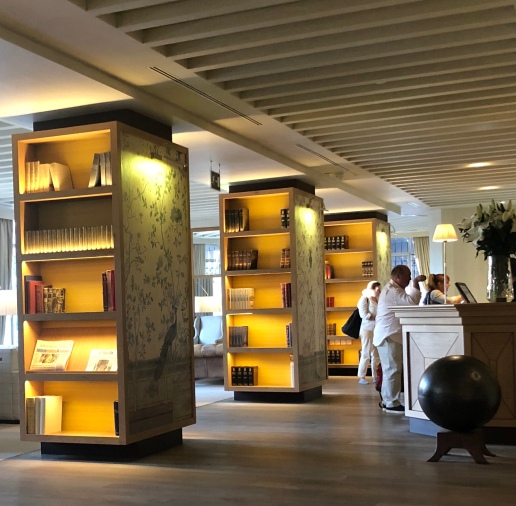 Have dinner at Media Racion – the delicious restaurant at the hotel. 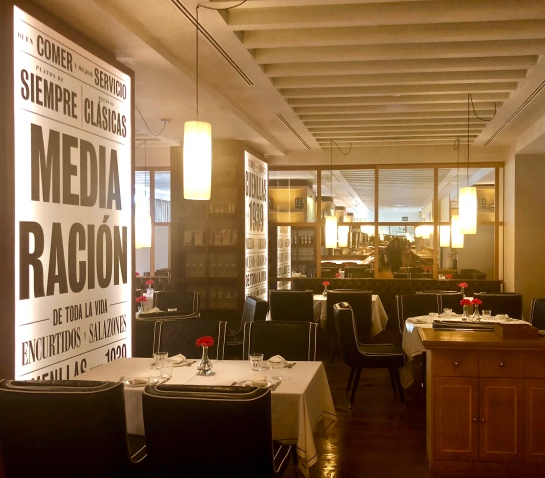 Breakfast  -Urso’s continental breakfast in the  lobby bar did not disappoint. I had toast with tomato and oil, fresh squeezed orange juice and coffee – not a bad way to start my first day in Spain. 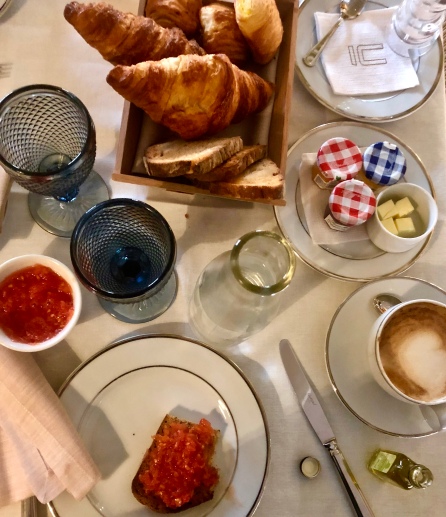 Street Art Tour of Madrid . It is always my favorite thing to do in a city (more later.) 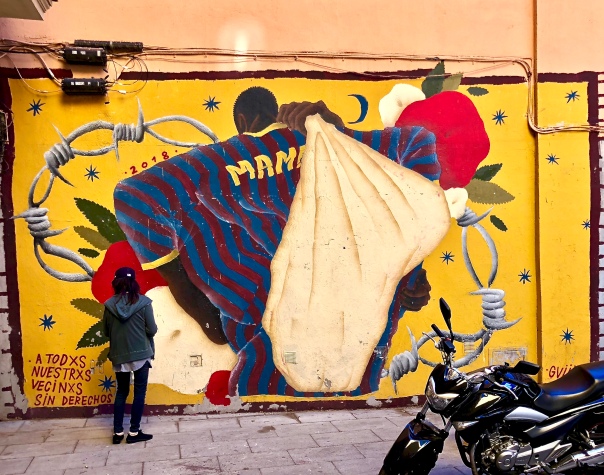 Lunch at the Reina Sofia 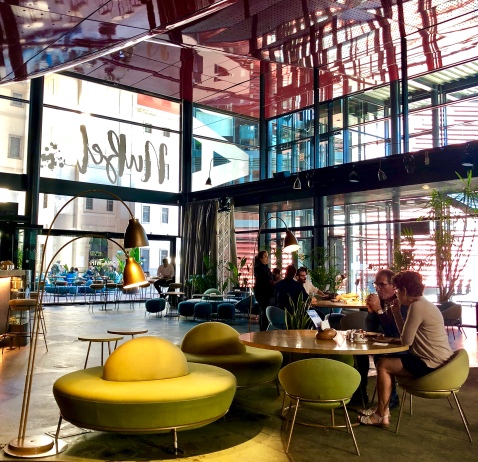 Visit Picasso’s Guernica at the Reina Sofia. The visually stunning Guernica is the favorite painting of my childhood from the  Museum Of Modern Art in New York.  It was returned to Spain in 1980 when I moved to California. At first glance, the painting looks like chaos – all hard lines, blunt angles, and cartoonish scenes of animals and people. But when you look at the details, you begin to see more. Here’s a woman, grieving for the child in her arms. There’s a fallen man, his broken sword lying beside him. The painting depicts the bombing of Guernica (in Basque Spain) during the Spanish Civil War. The Guernica takes up nearly an entire wall of the museum, and at eleven feet tall and nearly twenty-seven feet wide, it is simply massive – especially to a child. The painting always has the same emotional effect on me. I visited the city of Gernika (Basque spelling) in the Basque region on this trip. It was a peaceful quiet city and of course was nothing like the painting. But it was strangely poetic to be standing there. 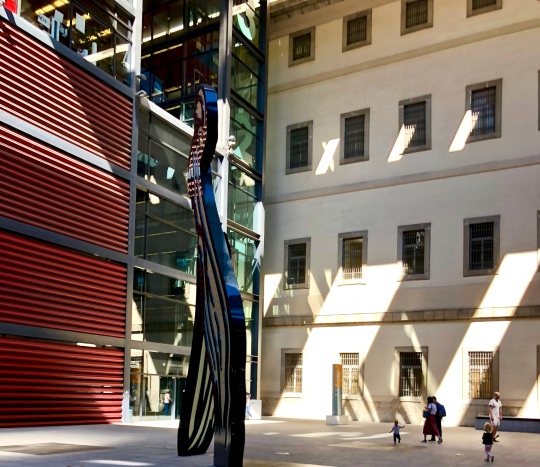 Visit the Spanish Paintings at the Prado. No museum in the world comes close to matching the Prado’s collection of Velazquez, Goya and El Greco. Velazquez spent most of his life in Madrid as a court painter and is considered the greatest Spanish painter of all time. Las Meninas is one of the great Spanish paintings. There are eighty works by Velazquez in the Prado. There are over nine hundred paintings by Goya there as well. 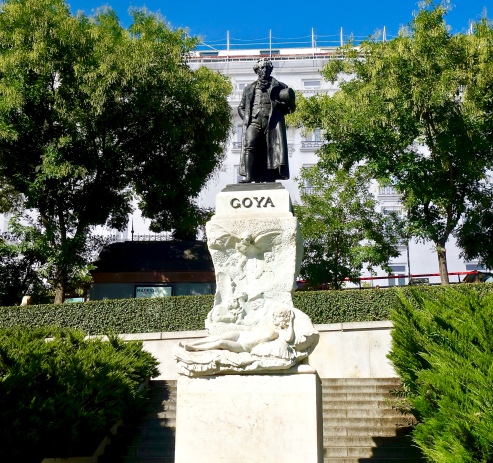 Follow his trajectory from his early portraits, light and full of life, through to the dark intensity of his final works.There’s nothing quite like the Black Paintings. Painted directly on the walls of his house in the outskirts of Madrid towards the end of Goya’s life, they reveal the inner life of an artist disillusioned by politics and society, losing his health (and possibly his mind), and confronting his own death. These are dark, twisted scenes which stay with you long after you leave the museum. 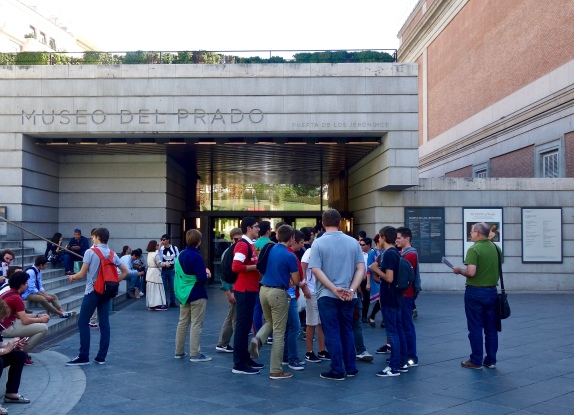 Churros and Chocolate at San Gines  One of the great customs in Madrid for either breakfast or afternoon is a sweet pick me up. It’s the smell of the  intoxicating blend of hot oil, fried dough, and melted chocolate that lures everyone in. Hot chocolate in Spain bears little resemblance to its counterpart in America. Spanish chocolate is designed for dipping, so it has the consistency of something  like a warm, soft pudding. Those long, sugary sticks of dough sold at Disneyland or  Costco bear little resemblance to the authentic Spanish article. Churros must be eaten fresh from the fryer, are almost more savory than sweet, and are considerably shorter than their American imitations. 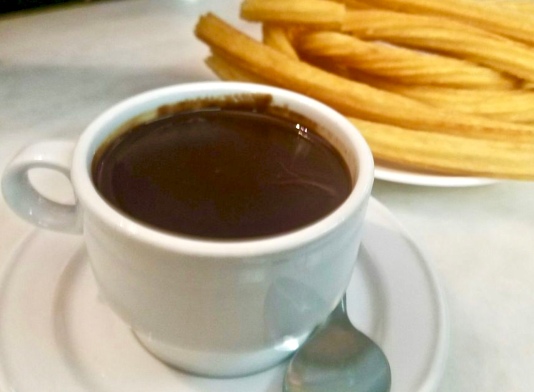 The spa at Hotel Urso uses the Natura Bisse Spanish products that I use at home. I am eager to try some treatments and spend the evening having a decadent facial, massage and body treatment. I take advantage of the steam and whirlpool facilities. It is an excellent experience to unwind and get rid of the jet lag.

In the morning, I leave for Bilbao – after I eat my new favorite tomato and olive oil on toast .