“It’s a toss up when you decide to leave the beaten track, many are called but few are chosen”. Somerset Maugham

No one can agree on the history of Easter Island. It was named Easter Island by the Dutch explorer Jacob Roggeveen, who landed there on Easter Day in 1722. They found a population of between 1,500 and 3,000 inhabitants and about 900 giant stone statues. The statues, called Moai, were carved from compressed volcanic ash and stood as high as thirty feet, weighing 90 tons. 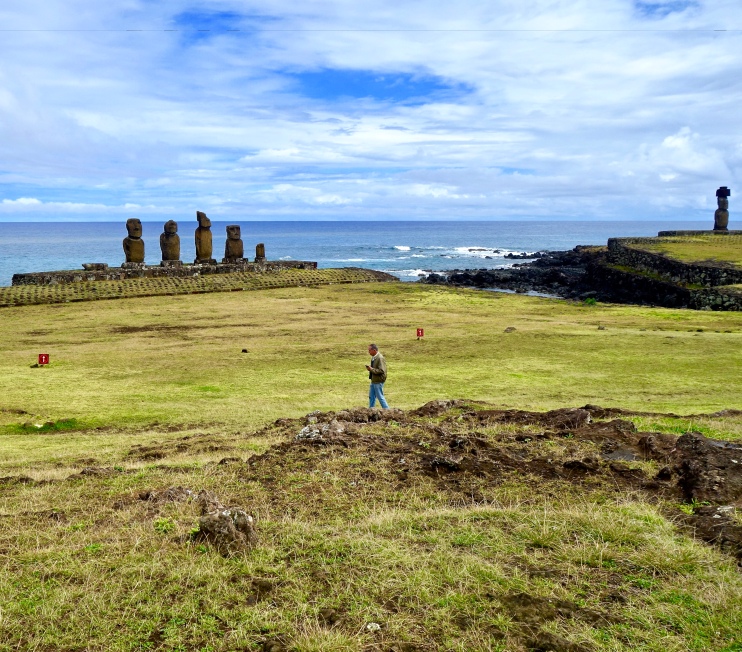 The locals did not care to explain their significance or method of creation. Captain James Cook wrote in 1774. “We could hardly conceive how these islanders, wholly unacquainted with any mechanical power, could raise such stupendous figures,”

When did the first people arrive? Where did they come from? Why did they carve such enormous statues? How did they move them and raise them up onto platforms?

The missionary’s stories, the explorer’s diaries, the archaeologist’s shovel, the anthropologist’s bones and the Rapa Nui oral tradition have all revealed something of the story. No one agrees on any of the answers to these questions.

The Rapa Nui have a story. When the first king Hotu Matu’a arrived on the island he brought seven different races with him, which became the seven tribes of Rapa Nui.

All the Moai sites have names. It is believed that the seven statues at Ahu Akivi represent the original ancestors from the kings of other Polynesian islands. Most of the statues face inland guarding the island and protecting the inhabitants but these seven face the sea remembering where they came from.

The quarry is one of my favorite places on the island. It is on a volcano called Rano Raraku.

The steep path winds through an astonishing landscape of Moai – giant heads, broken bodies, some tilted and without order, some fallen facedown on the slope.

The astonishing discovery by Thor Heyerdahl of Kon Tiki fame was that these giant heads had giant bodies under the ground. 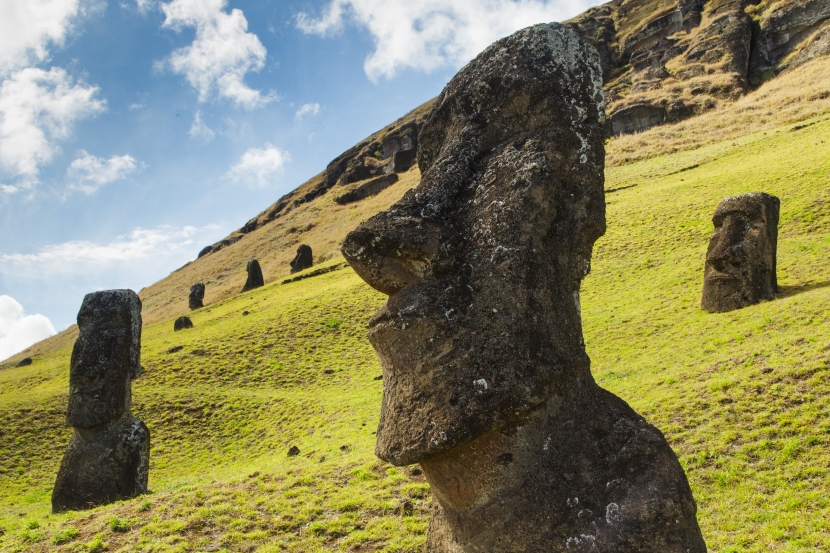 They say, when a statue was almost complete, the carvers drilled holes to break it off from the bedrock, then slid it down the slope into a big hole so they could stand to finish it. Eye sockets were carved once a statue was on the platform and white coral and obsidian eyes were inserted during ceremonies to awaken the moai’s power. I bought an artist’s model of the eye.

In some cases, the statues were adorned with huge cylindrical hats or topknots of red scoria, another volcanic stone.

The hats were made at another quarry that had the red scoria.

The faces of the statues look very human and more Peruvian than the current Rapa Nui. Thor Heyerdahl believes there were early Peruvians. 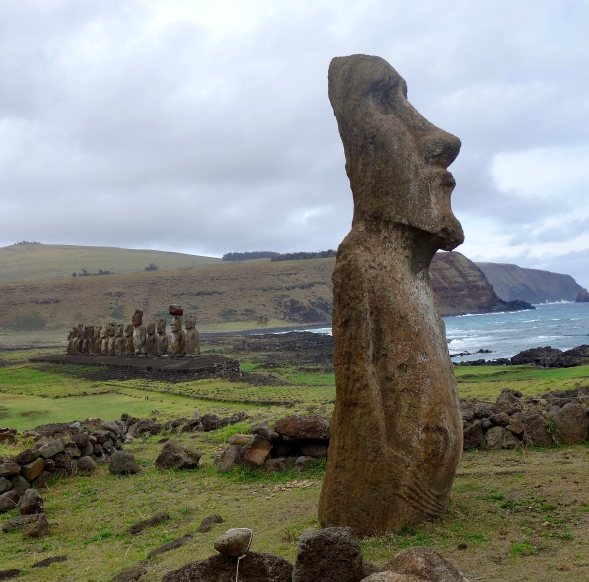 There is a lot of speculation on how the islanders moved the Moai from the quarry where they were carried to their many locations.

Archaeologists have proposed methods for moving the statues, using various combinations of log rollers, sledges and ropes.
In the Rapa Nui oral tradition, the Moai were infused with mana, a spiritual force from the ancestors and the Moai walked.

The Rapa Nui stories make just as much sense of the unknown as the scientific theories. There is no proof that it did not happen that way.