Just A Lot Of Walls –  Urban Art In Lisbon

“I was here but now I’m gone. I left my name to carry on. Those who liked me, liked me well. Those who didn’t can go to hell'” The bathroom wall

Like any subculture, street art has its own slang. You don’t need to know it to appreciate the art but some words that pop up are spot jocking (putting your work up next to a popular artist for some attention), child style, tiling, (both self-explanatory ), reverse graffiti (creating art by taking off and not applying paint) and one that I heard a lot on my street art tour of Lisbon – intervention. (Sainer) 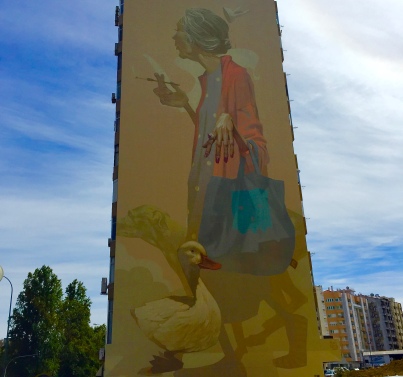 It’s not a word I hear often unless it involves rehab. Intervention is a street art term used to disrupt public space as opposed to street art which is decorative. My  street art guide in Lisbon used the word  as a form of urban  artistic expression. Art intervention is art specifically designed to interact with an existing structure.  I guess with that definition  all street art can be called an intervention.

The only street art tour I could find was a private tour given by the street art collective Underdogs. http://www.under-dogs.net/ They have a gallery with exhibitions of interesting street artists, affordable editions at their shared store space, and public art and community programs. They do not do group tours  and instead invest their time in promoting artists and art  education in the community. (Bicicleta Sem Freio)

My tour guide Marina Rei shows up full of passion and enthusiasm for the art on the streets of her city.  She is excited about the artists in residence and the educational programs  she has just completed.

Underdogs was started by a famous Portuguese street artist named Vhils.  The word underdog means to struggle against something more powerful than you. They are “underdogs pushing to be top dogs .”  (Vhils)

Their art gallery is in an old warehouse area just starting to be gentrified. The current exhibition is by Spanish street artist Okuda. 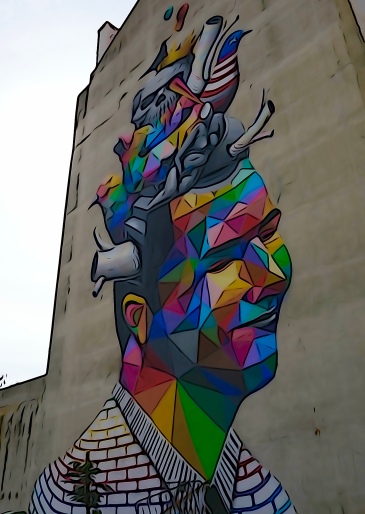 Murals appeared around the city similar to those in unstable South American countries portraying the problems and the dreams. There are still references to it throughout the city. 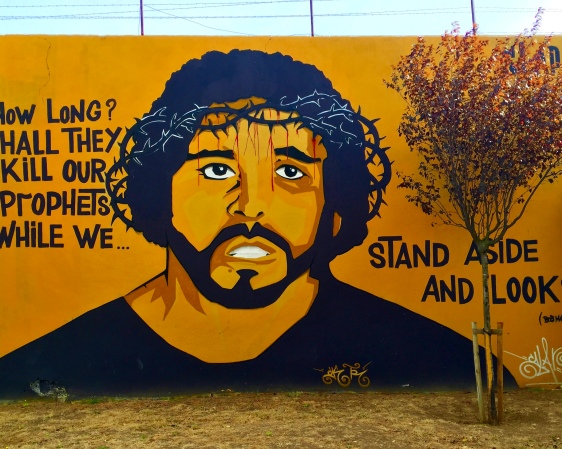 The old warehouses of Clube Naval de Lisboa,  are now covered in a work of art by Bicicleta Sem Freio, a group of Brazilian artists. They create murals around the world.

My favorite work that I saw that day  was a series of girls  by Lithuanian street artist Ernest Zacharevic. He sees himself as a fine artist who paints in the streets and that is evidenced by the combination of spray paint and detailed art.  I really wanted one of these. The last time I thought about cutting a piece of street art out of the wall it was by a guy named SAMO in New York.

The  outdoor walls in Lisbon have become a lot of blank canvases for the artists. It is sometimes  a strong form of communication and sometimes it is quieter.  But, there is always a splash of color.