“I must go down to the seas again, to the lonely sea and the sky,
And all I ask is a tall ship and a star to steer her by.”
John Masefield

When entering Panama the sign reads “Welcome to Panama. We are committed to fighting drugs, crime and terrorism.  I left my purse at customs, my shoe at one hotel and my ipod at another. I got the first two back so I guess this is partially true.

Panama hats come from Ecuador . They are called Panama hats because they ship from Panama.  The company was owned by the Alfaro family. One of the sons financed his revolution  with the sale of the hats. Al Capone loved his Panama hats as did Clark Gable , Humprey Bogart, Charlie Chan and Greta Garbo. (Panama hat on the Panama Canal)

A falling coconut can seriously ruin your day. 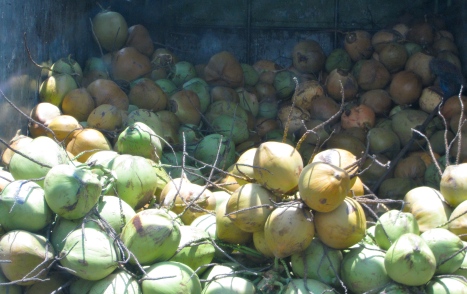 Buses ship from the US to Panama.  Our yellow school buses are painted white with flashing lights and sirens and used by the police.  You also see  brightly painted  buses with flashing  disco lights, a bar and the seats taken out. These are “Rumba Buses”. They rent them out for parties and you see them driving around town at night with everyone dancing. I guess the seat belt rule and no open liquor in a car doesn’t apply here.

The  city buses  are called the “Diablo Rojos” ( Red Devils). The drivers paint them when they receive them from the states. Some are more artistic and some are more enthusiastic.  The drivers are crazy, dangerous and very fast. They  get paid by the amount of adult passengers they have in a day. The buses are jam packed and don’t often stop for school kids who pay less money.   It is best, as a tourist, not to take public transportation or cross the street near them. 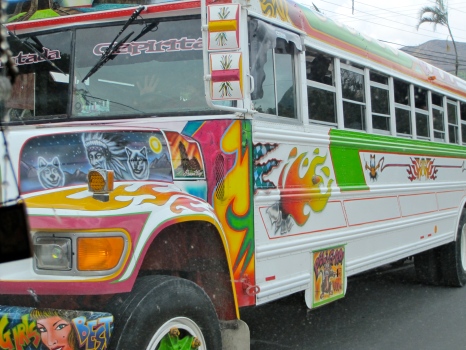 Panamanians believe that if you don’t have a job , it is because you don’t want one. You can always grow fruit and sell it from window boxes or take one of the many construction jobs around the city.

The neighbors have stopped the construction of the Trump Hotel Casino. How much will Mr Trump pay?

Iguana and crocodile tail ( the other white meat) taste like chicken.

Nature has been good to Panama. No hurricanes or earthquakes so far.

Watching Las Kardashians on Eonline Latino is just as annoying in Spanish.

Translation -Lock your car and watch your stuff.

At one point of time, the shares of the Panama Railroad were the highest priced stock on the New York Stock Exchange, at $295 per share.

The Panama Railroad was the most expensive railroad ever built, as it cost 8 million dollars and took 5 years to build. Twelve thousand people died building the railroad. 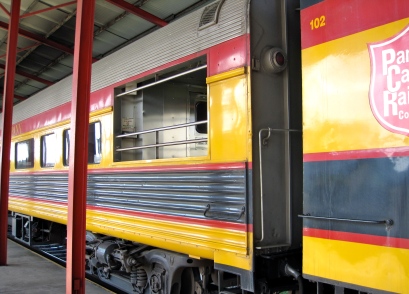 Panama is the only place in the world, where you can see the sun rise in the Pacific and set in the Atlantic.

“A man a plan a canal panama” is a palindrome.

The cargo ship Ancon was the first vessel to transit the Canal on August 15, 1914

Seven out of ten Panamanians haven’t heard of the song “Panama” by Van Halen.

Panama City is the only capital city that has a rain forest within the city limits.

You know you are in the rain forest, when you take a walk and run into him. 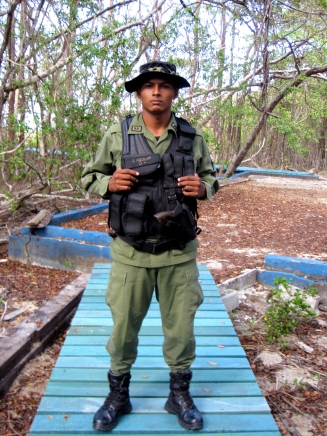 The El Chorillo  neighborhood is a good place in Panama City to go for fish and plantains. Unfortunately, it is not a good place to get out of your car.

Laws in Panama for the rich and the poor are very easy to break.

Outside the Panama Canal are the largest concentration of sharks because the ships dump their waste before entering the canal.

It is a 48 hour queue to enter the Panama Canal from both  the Atlantic  (Carribean Sea) and the Pacific side. If you miss your turn it takes a week.  It is what I will remember most about Panama, looking out at the horizon  day or night and seeing these big ships lined up. (Atlantic, Pacific)

It cost 465,000 for a large cargo ship to enter the canal. Cruise ships pay by the person. There are Panama Canal tour boats as well. It sounds like a lot of money but it takes ten hours to go through the three locks on the canal and  22 days  to go around South America.

When the Panama Canal was completed in 1914,  it cost  352 million dollars. At the time, it was the most costly enterprise ever conceived. There is a project to enlarge the canal going on right now in the hopes to  be ready in 2014 to celebrate 100 years of the canal.( going through the first lock of the Canal) 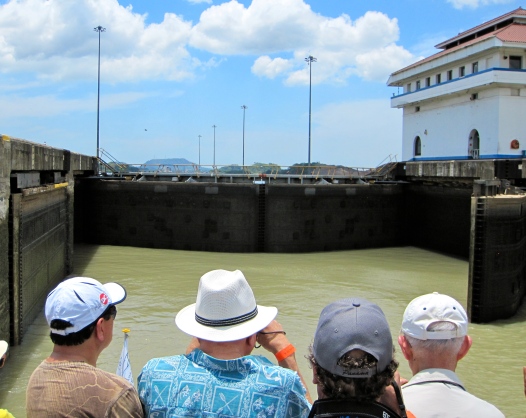 2o,ooo people died during the French attempt to build the canal in the 1870,s and five thousand more died  when US built it.( cargo boat entering the canal) 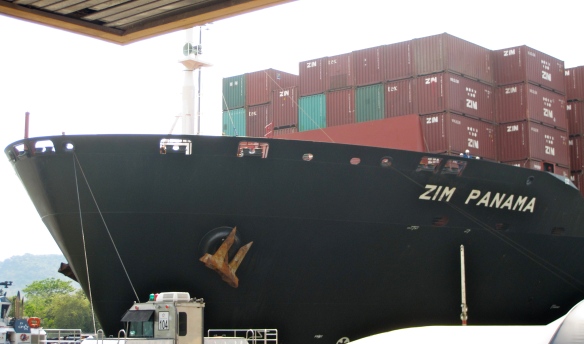 The Panama Canal reverted back to Panama in 1999. If they attempt to sell it, they must give it back to the US. (Boat coming through the canal)

People who live in the Canal Zone are called Zonians. These are not Zonians. (Miraflores Lock Lookout Point, Canal Zone)

Some say bananas attract mosquitos. We don’t know if that is true.  I do know that  eating a banana on a boat near an island in the rainforest on Gatun Lake, will attract white faced capucine monkees. They will not only jump on the boat and take it out of your hand, they will check everyone’s hands to make sure they aren’t missing anything.

The Jesus Christ Lizard in the rainforest is called that because he “walks on water.”

It is best to shake your clothes and shoes out in the morning before you put them on so the scorpion  can fall out.

You know you are in the rainforest, when you take a walk and run into this. Iguanas have the right of way in Panama. (at least they do when I am walking)

The most deadly creature in Panama is the poison dart frog No bigger than a thumbnail and found in the jungle, it can kill you on contact and possess a poison 200 times more deadly than strychnine. This is important info because it is really cute. 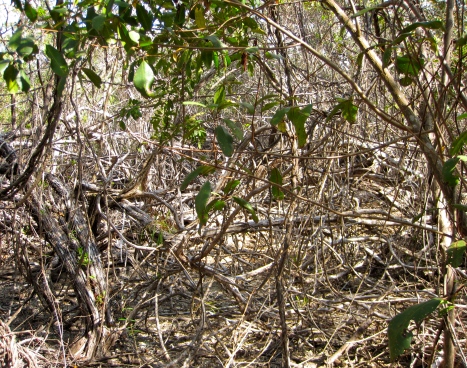 Lying on a hammock in the rainforest listening to the birds and the rain is so relaxing until the kids next door come home from the Embera  Indian village with Tom Tom drums.

You know you are in the rainforest when you walk outside your hotel and see this.  It is much larger than a squirrel. (Central American Agouti)

When hiking on Barro Colorado Island, you are not supposed to step on the ants. The carnivorous army ants are marching into the forest  and the other insects are fleeing which makes it hard to find a place to put your feet and keep up with the three hour hike, while covered from head to toe in mosquito repellent clothing in 100 degree temperature and 100 per cent humidity.  Surprisingly, I loved it. (the ants are carrying the leaves)

Be careful in restrooms in Galeta, the wasps don’t like the wind so they build their nets there and they don’t like to be disturbed. So while you checking if you can use it, look up. 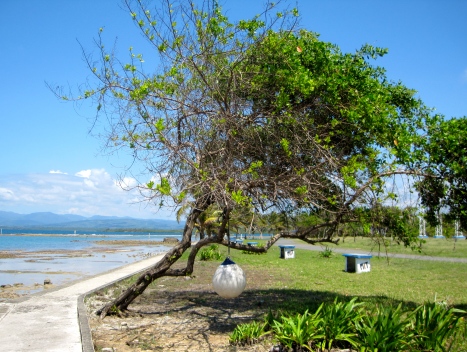 Im not sure what a staple of the Panamanian diet is but perhaps it is rice. The staple of my diet in Panama was bananas. I had fried plantains at breakfast lunch and dinner and carried bananas around all day. There was no lack of potassium for me in Panama. 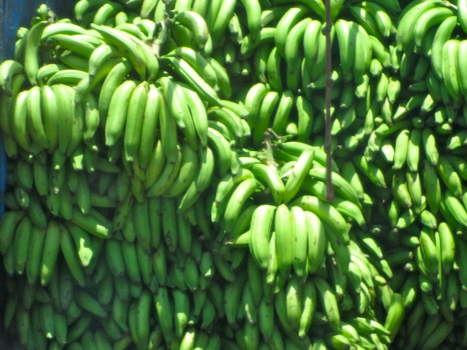 Under 80 degrees is cold to Panamanians.

My favorite meal in Panama was Sancocho soup which consisted of large pieces of chicken, potato, yucca and nami served with a bowl of rice. and flavored with culantro.  It tastes just like cilantro but they insist it is not.

The Frank Gehry Museum of Biodiversity is finally finished. The guide on the  Panama Canal called it a building from someone who has done too much partying in Panama. I guess he hadn’t been to the Walt Disney Concert Hall.(view  from the Panama Canal)

You know that you are in the rainforest near the Embera tribe when you take  a boat down the river and run into them.

Going to the bathroom in the Embera native village in the rainforest made me remember why I never joined the Peace Corps.

Watching the Embera children come home from school walking across the shallow end of the Chagres River holding their books over their heads is something I will try to remember when I am sitting in traffic in the rain. (the Chagres River)

The Kuna tribe in Panama are the shortest people second only to the pygmies in Africa. They are all under five feet tall and have the largest percentage of albinos in the world . Albinos are considered to be children of the moon and possess powers so they often become shamans. They are said to be born that way because the pregnant woman was naked and exposed to a full  moon, They also make molas and  beautiful jewelry.

Panama is small and you do a lot of backtracking. We passed Noriega in the club med of prisons in the rainforest so many times, I was thinking about dropping off cookies.

Shuffle your feet in the sand in the ocean to scare away the stingrays – apparently their slashing tales can cause serious wounds,

Watching out of shape people do water aerobics at the Playa Bonita resort is one of those universal giggles.

Finding pink shells on the beach in Playa Bonita (and of course bringing them home) feels so much more productive than finding white ones.

I had seen the Panama Canal for a few days before I went through it. I rode the Panama Canal Railroad alongside it,  went to  two PC museums ( the English and the Spanish one), stood on the lookout point at Miraflores Lock(one of the three locks) and watched the film . I was completely unprepared for the sense of awe I felt as the third gate opened and we entered the canal. There were people from all over the world on the boat and for that moment we all felt the same way.

4 thoughts on “Things I Have Learned In Panama”