“And above all, watch with glittering eyes the whole world around you because the greatest secrets are always hidden in the most unlikely places. Those who don’t believe in magic will never find it.”  —Roald Dahl

. 1.Cappadocia could be among my favorite places in the world.  The dramatic landscape is the result of volcanic eruptions that happened millions  years ago. Wind and water eroded the land leaving these odd surreal land formations, fairy chimneys, and caves and underground cities. 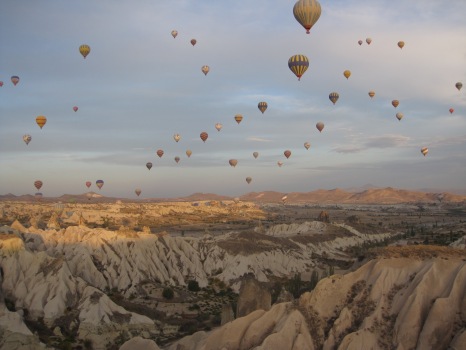 Goreme Open Air Museum is a group of cave churches and monasteries from the 11th-13thcentury.  The most famous and most restored one is Karanlik Killse (Dark Church) which is filled with elaborate Byzantine frescoes. Early Christians escaping from Roman persecution found shelter in Cappadocia. 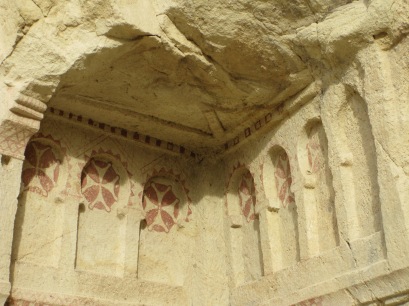 Yunak Evleri Hotel is an amazing  Cave Hotel carved into a mountain in the ancient city of Urgup. (.yunak.com/en/index.html) 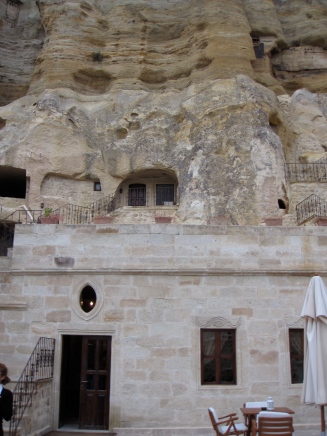 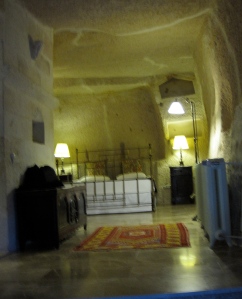 Ziggys  is not the restaurant you would expect to find in an  ancient cave city.  It is cool with interesting decor and great music . It is owned by Selim and Nuray Yuksel. Nuray is an artist and also runs a beautifully displayed  gallery filled with crafts and jewelry from local Turkish artists  downstairs.   The food is so good that we ate there both nights. ( ziggycafe.com )

Hiking through the Mushroom  Valley, Love Valley,  Goreme Valley, walking all around Urgup early in the morning 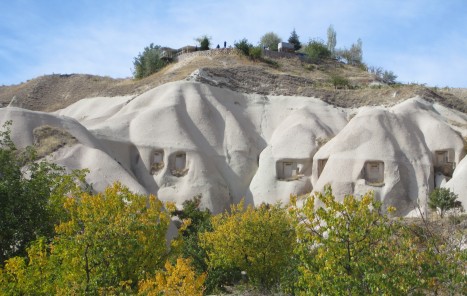 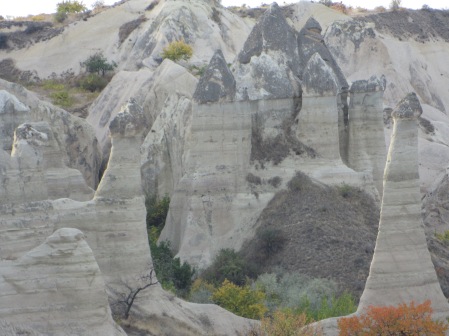 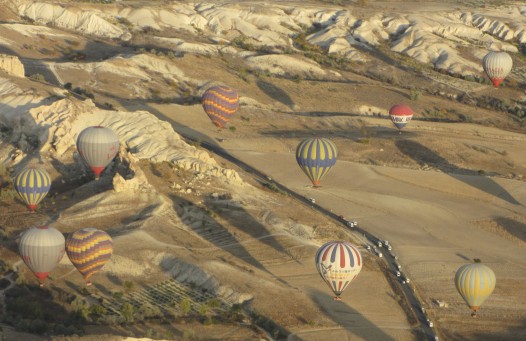 2.Any restaurant or menu chosen by Oguz Kaya.  I  have never eaten Turkish food before.  I had no idea it was my favorite food.  Every meal was “the best one”. We ate in expensive restaurants,   gas stations,  hotels, outdoor seaside restaurants, an organic garden , a mosque,  –even the food in Ankara airport was good. (Uzun Ev Restaurant in Behramkale, Daruzziyafe,  Ottoman restaurant in Suleymaniye Mosque by Sinan in Istanbul, Orient restaurant in Cappadocia) 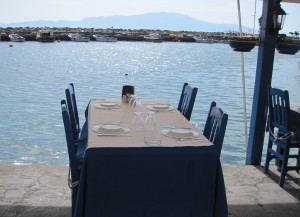 3.Any mosque by architect Sinan especially Selimiye Mosque in Edirne I loved the Selimiye Mosque and it turns out that it is Sinan’s favorite mosque as well. He wanted it to be greater than the Hagia Sophia.  His genius was in his  use of form, simplicity, light and balance. It all worked when you walked in. He is also considered to be  one of the first earthquake-proof engineers. ( Selimiye mosque,1575, notice the recycled columns) 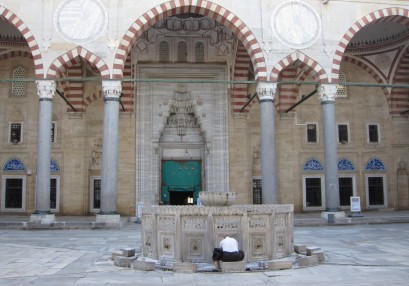 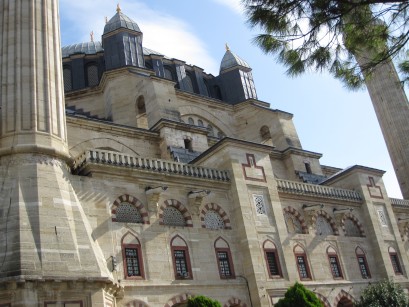 4. Hearing the call to prayer early in the morning at the Hotel Manici Kasri in Yesilkurt.  In a tiny village of stone houses at the foot of Mt Ida is this charming hotel. Yesilkurt (which I still can not pronounce – it is harder than it looks.) has the second highest concentration of oxygen in the air  in the world. It is a small hotel  with pomegranate trees and great food.  It was very quiet in those mountains and early in the morning I awoke to the call to prayer – the only sound in this village. I could have been in any mountain village but the call to prayer in Turkey always reminds me to take a minute and be in the present. (www.manicikasri.com ) 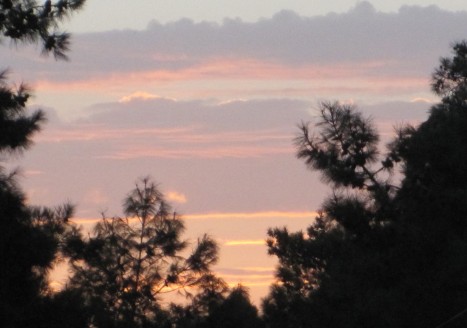 5 Hammam.   I like a good hammam. I didn’t know  that until I got to Istanbul and found out what it was. You’re taken to a warm, humid room with a raised stone platform (goebektas) in the center, surrounded by bathing alcoves. The light, diffused through glass in the ceiling is soft and relaxing. You lay  on the platform (usually with other people), and you’re scrubbed cleaner than you have ever  been. They use  a coarse mitt to remove layers of dead skin and then comes the soap. A lacy cloth is used , like an icing bag, and  they blow through it to create bubbles so you’re covered from head to toe with white frothy bubbles. It is followed by a massage.

6 Hagia Sophia   I studied this masterpiece of Byzantine architecture in  school and always wanted to see it.   It was built in the fourth century as a church and converted to a mosque in the sixteenth century. It was the world’s largest cathedral for 1000 years and contains remnants of all the renovations.    It is now a museum and very crowded but I was able to block out the noise and feel the history and remember the architectural elements. I had so many questions but I  was overwhelmed and couldn’t  speak.  It was real. I was finally in Istanbul at the Hagia Sophia. 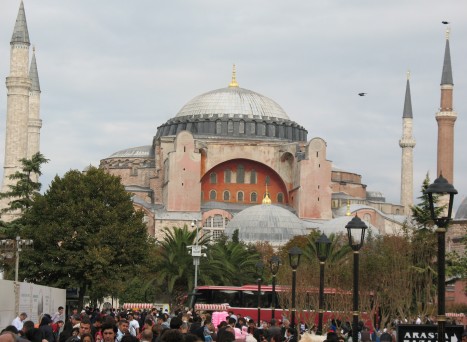 7.Drinking fresh pomegranate juice on the street and picking one from a tree and eating it. 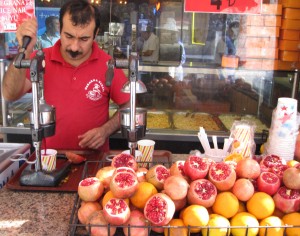 8. “The Turtle Trainer” by Osman Hamdi Bey.  This painting is in the Pera Museum in Istanbul.  It shows a man ( self-portrait of the artist) in what looks like a religious red robe, holding a sufi flute trying to train turtles. But the turtles have no ears and a thick shell  so they probably don’t hear him.   The lesson is that change is difficult and requires patience.  Osman  Hamdi  Bey was an important artist and intellectual in the Ottoman Empire. He established the first School for the Arts in Istanbul. Who can say why a painting touches you?  But I will always remember this painting. 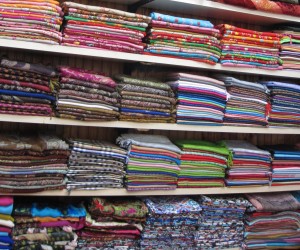 10. Stopping at  an empty caravanserai on the silk road from China to Europe  and hearing the call to prayer.  This time, I pictured the caravan drivers hearing the same thing.   The caravanserais were built like forts. They were a safe places for caravans.  Once within the caravanserai a weary caravan could look forward to warm food, a bath and a safe shelter for the night for both men and animals. They provided food and lodging reportedly at no charge for 3 nights and free repair to footwear. They were conveniently spaced a day’s camel ride apart. (camels can ride from sunrise to sunset. The riders worked like truckers and had their routes.)  Built to promote trade, they brought prosperity to the communities hosting them. Nobility and their entourages used them too. So did the military. (Hoca Mesut Caravanserai 1231-1239)

“Think, in this batter’d Caravanserai, Who portals are alternate night and day, How Sultan after Sultan with his Pomp, Abode his destined hour, and        went his way.”             Omar Khayyam 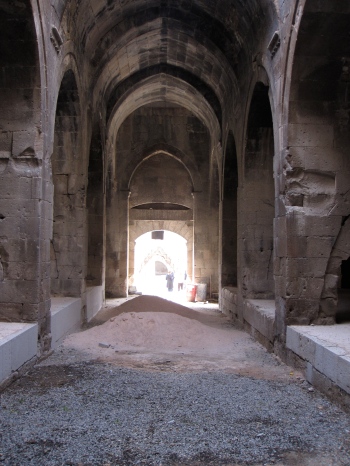 For more info on  Turkey read Things I Have Learned In Istanbul https://havefunflysafe.wordpress.com/2012/11/29/things-i-have-learned-in-istanbul/

5 thoughts on “My Top Ten Favorite Things In Turkey”