“So long as you have food in your mouth, you have solved all questions for the time being” . Franz Kafka

“Turkish food is not about experimentation but about technique”. It is about enjoying the essential ingredient.  You can have fresh fish cooked in a bit of olive oil and served with lemon, a salad with a little bit of olive oil, Fresh cheese and a bit of honey or lamb cooked with spices in its own juice.  Turkey is known best for meze. Meze  are small dishes that start the  meal. The meze are based on the seasons and the locale.  There is  usually  some white  cheese  ( beyaz peynir  -similar to feta but not as strong) served with fruit or vegetables or just some honey;  yogurt dishes –like dips (cacik or heydari) or with vegetables (esme),  meat dishes like kofte (meatballs), salads and vegetable dishes. Near the sea there will be small fish dishes – sardines, fried calamari, stuffed mussels, octopus and shrimp. Desserts are dough based or puddings with fruit or dried fruits and honey and nuts.   It was hard to make this restaurant list because all the food was amazing, very fresh and flavorful.

KOSEBASI, ISTANBUL Kosebasi located in the Nisantasi area of Istanbul, is a high-end chain restaurant throughout Turkey and the Middle East.  It has a star-studded clientele and is said to have some of the best kabob in Turkey and I would have to agree.  It was one of our first and best meals.  The  Turkish bread   was fresh, hot, chewy and light. The lamb and chicken kabobs had been marinated in delicious  spices  and were very tender.  The meze ( starters) were delicious.,   We had pastrami hummus,  bulghur salad,  broiled eggplant with yoghurt, white cheese and barbecued eggplant.  I love eggplant and the fact that I could have so many different kinds of eggplant in a meal was amazing –Two weeks later  I took it for granted.  The dessert was a semolina cake made with olive oil and pistachio ice cream. I didn’t know  until I visited   Turkey that semolina desserts are one of my favorite desserts. http://kosebasi.com/en

NAR LOKANTA, ISTANBUL. Nar Lokanta is on the top floor of  the stylish  gallery like store  Armaggan.  It is located in the Sultanahmet area of Istanbul right near the Grand Bazaar and Starbucks. There is a beautiful vertical garden hanging down to the floor below outside. The menu changes daily as food is always seasonal.  It was at this restaurant that I had my first Turkish Pide and I was hooked.  Pide restaurants have wood fire ovens ( kind of like pizza ovens)  The dough is rolled and stretched into the boat shapes that form the pide.  The outside is rolled in to create a center for the filling We had many different kinds, – vegetable, cheese and lamb and cheese and olive.    Nar Lokanta uses their own olive oil which has a very low acidity and an almost sweet flavor.  It was never just pide for us in Turkey. Salads and cold vegetable dishes  are served as an open buffet – stuffed pumpkin flower, eggplant dishes, mung bean salad, artichokes with broad beans and seasonal wild herbs dressed with olive oil, lemon juice and sour pomegranate juice are a few of the many choices. There is also a large  dessert buffet which includes  pumpkin pudding, rice pudding, fig pudding, and baklava. There are many flavors of Turkish Delight.  (  homemade Turkish candy called Lokum). Turkish Delight was originally eaten after a meal for digestion.  This was not only a delicious meal but also very visually appealing.  narlokantasi.com/en/about.htm 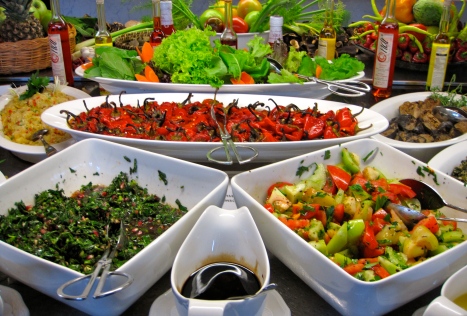 ZIGGY, CAPPADOCIA.   Ziggy is an arty,  contemporary Turkish restaurant in the ancient city of Urgup.  The food is seasonal and they use the best quality ingredients so the menu changes daily.  I can tell you this for a fact  because it was so good we ate there two days in a row . I had the best chicken skewers of my life.  They are small pieces of garlic chicken cooked in a secret sauce and served on mini skewers.  Some of the mezze, were vegetables mashed into yogurt ,seasonal salads, vegetables cooked in olive oil and served cold called zeytinyagh (fava beans, eggplant artichoke and zucchini) and pastirma. Nearby Kayseri is known for its pastirma. Pastirma is the ancestor of pastrami and very popular in this part of Turkey. We also had an amazing dessert called borek ( which is made with layers of phylo dough) Boreks can also be filled with meat, cheese , potato and spinach.  This one was tiny boreks with cinnamon and sugar served with thin slices of green apple. ( like mini churros ) On a trip of my favorite desserts, this was my favorite.http://ziggycafe.com/about.htm

ORIENT, CAPPADOCIA.   Orient restaurant is located  at the beginning of Goreme, a beautiful village in Cappadocia. We had a salad of fresh organic herbs and vegetables.  Sealed clay pots were brought out  and broken open. Inside was steaming tender lamb cooked in these  clay pots with onion garlic and spices . This was a version of  the typical peasant dishes  cooked in those underground cities in Cappadocia. It was served over rice pilaf and  incredibly delicious.  For dessert, we had baklava. Not the sticky overly sweet version we have here,  but light and wonderful.

BIZEM EV, SELCUK-IZMIR  Bizem Ev is a traditional Turkish restaurant  with an organic garden. It is not too far from Ephesus and has a pretty outside area in the garden.  Bizem Ev means “Our House.”  I drank my first Ayram here. Ayram is a yogurt drink that people drink all over Turkey. It is made with ice salt and yogurt and is very refreshing and delicious. (like  buttermilk which I happen to like.) This is a family run business and the mother cooks everything every day.  It is a huge buffet of fresh vegetable dishes from  their  garden as well as many Turkish specialties. Anytime the mother is cooking you know it is going to be great. You can also buy her cookbook and she will sign it for you. 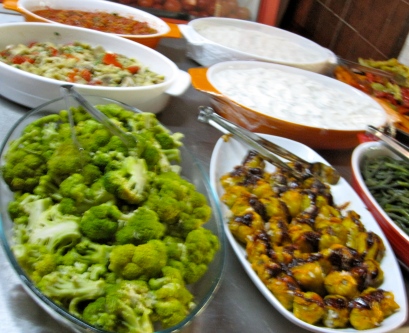 UZUN EV, ASSOS – BEHRAMKALE.  Uzun Ev is located  in the small fishing harbor of Assos Behramkale , -a village near the ruins of Assos. The village is on the side of  a cliff and you have to go down a very narrow steep road  and walk part  of the way to get to the  restaurant on the sea.  It was a  beautiful day for a nice  walk.  The interior of the restaurant was very pretty but  we sat right on the water. We had a delicious lunch of fish stew with cooked greens sitting at a table  on the Aegean Sea. 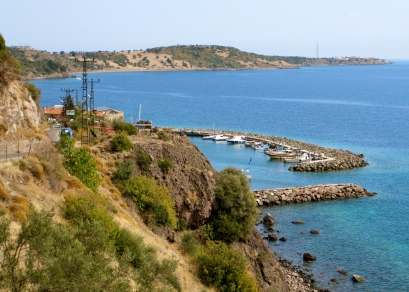 RADIKA  CANNAKALE .  Radika is a seafood restaurant on the top floor of the Akos Hotel in Cannakale.  I had my first seafood in Turkey there. It was delicious bonito cooked perfectly. It was also my first salad. I have traveled to a lot of third world countries recently and  was in the habit of only eating cooked food. ( except pomegranate juice on the street)   The salad was so fresh and had just a bit of olive oil and lemon on it.  For dessert we had hot halvah with fresh fruit for dipping..  I was not allowed to have candy as a kid and we always had halvah in the house (the  store-bought Middle Eastern version – sugar butter and sesame paste.) I found it disgusting. Turkish halvah is made with semolina, butter and sugar  I was just planning to taste this dessert. It was amazing  and very different from the chewy, crumbly cardboard stuff of my childhood. .  It was another one of my most favorite desserts

MEZE, ISTANBUL Meze is a contemporary Turkish restaurant located across the street from the Pera Palace Hotel. It is cozy and cool inside.  We were there during the Bayram and so I ate lamb in honor of the holiday. It was really tasty (from a not meat-eater)  – I don’t really like lamb except in Turkey. ( They say it is because they slaughter the lamb young and their diet is wildflowers.) Meze serves the traditional Turkish starters with a more sophisticated twist. Their mashed fava beans, stuffed grape leaves, and eggplant salad is slightly different  and really good. Their dessert with banana, cream , honey and pistachios  shouldn’t be missed. 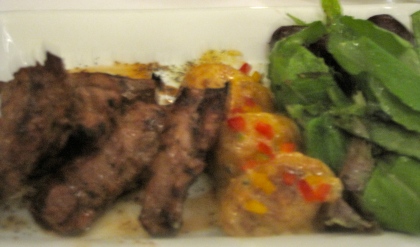 MANICI KASRI HOTEL, YESILYURT.   I haven’t talked about all the fantastic hotel breakfast buffets  because I’m not a huge breakfast eater. The Turkish word for breakfast, kahvaltı, means “before coffee”. It was customary to drink tea for breakfast – not for me. This area ( at the base of Mt Ida where Zeus was born) has seen many civilizations such as Trojan, Leleg, Midilli, Persian, Roman, Selcuk and Ottoman  and you can feel the influence on everything. The village is known for its less ascetic  olive oil and honey. Most of the trees are olive trees.  I think being in a village made everything fresher.  Perhaps it was the extra oxygen in the air up there that made me hungrier.   I had my usual breakfast but it just tasted better here.  There was fresh Turkish yogurt  in a bowl with  honey, from the village.   I had delicious pomegranate juice. I had some cucumber and tomatoes with a bit of  their olive oil. and the sweetest Turkish melon.    My favorite things are fresh hot Turkish bagels.  They are rings of dough covered in sesame seeds. They are known by different names in different areas but mostly they are called simit. They are often sold by street vendors in trolleys. or carried on their heads. After, I took a walk through the village right after the sunrise. (local olive oil, hotel, sunrise) 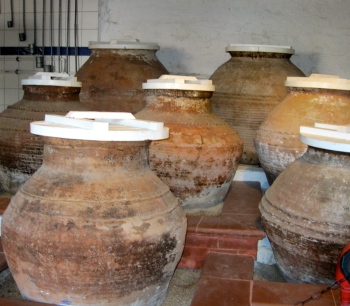 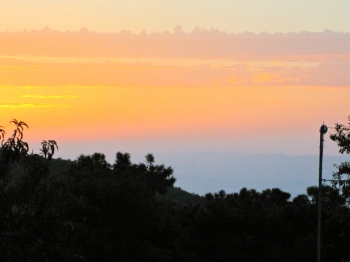 SAGLAM, BERGAMA and ZERDALI, AVANOS . Saglam is near the ruins of Pergamon and the Asciepion ( ancient Greek Medical complex) Zerdali is in Cappadocia.   We covered a lot of ground on this trip and had two lunches at restaurants  attached to gas stations and one in the airport in Ankara. They were all good.  I remember hearing the real estate was high and it was easier to have a large restaurant attached to a gas station. One family owned the gas station, the other did not.  The pide was excellent. At Saglam we also had kabob which was good (I was full from all the meze and the pide before the kabob.   I didn’t have dinner that night.  At Zerdali I had really delicious lentil soup with the pide.  I had a lot of lentil soup in Turkey. It is usually made with red lentils . It was always delicious but the one at Zerdali was particularly good.

I could continue listing restaurants .  But when you go to Turkey and try any of these places,  you will have a great meal.   I will miss this food.

For more info on Turkey – Things I Learned In Istanbul https://havefunflysafe.wordpress.com/2012/11/29/things-i-have-learned-in-istanbul/