‘So that the monotonous fall of the waves on the beach, which for the most part beat a measured and soothing tattoo to her thoughts seemed consolingly to repeat over and over again… “Virginia Woolf

I know the beach. I grew up on one. I knew the color of the sand, the coldness of the water, how the waves break and the distance between the jutting rocks. I found this photo on the internet. I lived right behind the left side of that  photo. I also learned to ride my bike at the beginning of the boardwalk. The houses weren’t there yet. It was all beach. but that red brick wall was. When we mastered the two wheeler, we would come careening down that incline with the dangerous thrill of wondering if we would turn the wheel before smashing into the wall. I ended up riding right on the beach a lot.  (Brighton Beach, Brooklyn, New York)

I liked how the sand felt on my toes and how the sun warmed my back. (Okinawa,Japan)

I knew where to find clam shells, crabs and snails. In the winter I built snowmen on the beach. In the spring, I chased birds. When I got older, I dated a lot of the lifeguards in the summer. I was happiest in a bikini on the beach getting a tan. (Bondi Beach, Sydney, Australia) 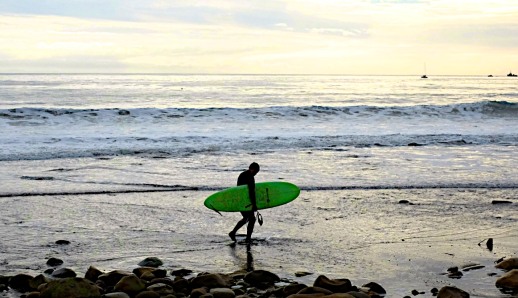 I’ve seen the power of hurricanes, felt the waves knocking me down or the undertow pulling me further out and almost drowned. There was always at least one drowning per summer. (Cartagena,Colombia)

We rented beach houses in Malibu when our kids were young. (Malibu, California) 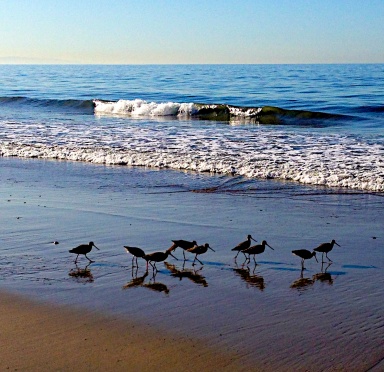 One summer, I decided to make a table out of sea glass. I needed thirty pounds of sea glass and I was determined to get it. I enlisted the help of family and friends. When a big pile of rocks came up, I was out there for hours, with my feet cut up. It was a job. Everyone on the beach wanted sea glass. I have the table. (Shell from Eluthera, Bahams) 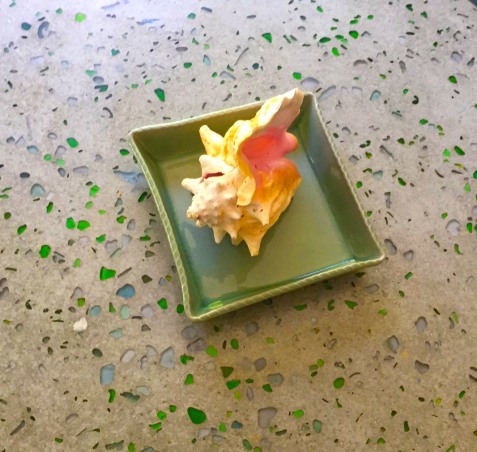 I still always look for sea glass on a beach.

I bring bags of shells or stones home from any beach in the world. I can not walk on a beach without looking for treasures. (Panama)

I turn to water for a sense of calm and clarity. (Hvar, Croatia)

The ocean gives my brain a rest and heals what is broken. (Marajo, Brazil) 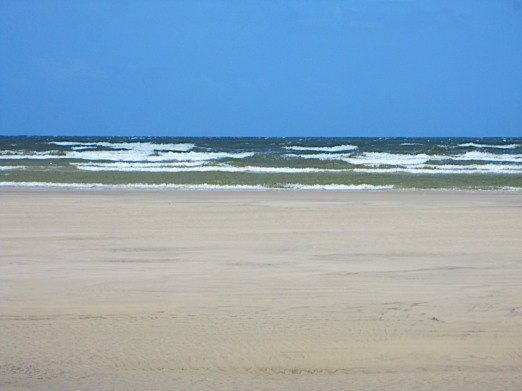 It connects me to something beyond myself. (Great Barrier Reef, Australia) 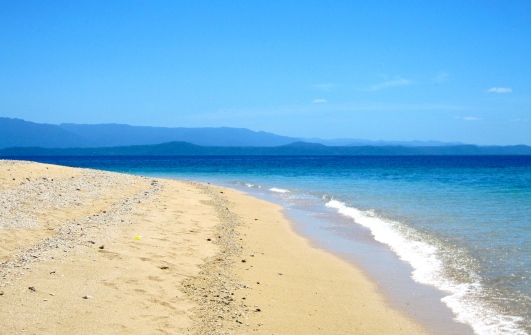 My life and my problems always seem very small compared to the vastness of the ocean. (Varadero, Cuba) 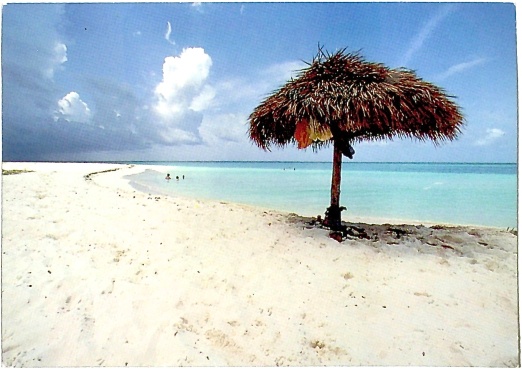 When I walk onto a beach in any country, it invokes the memories of my childhood and I am at home. (Paraty, Brazil)

“Twenty years from now you will be more disappointed by the things you didn’t do than by the ones you did do. So throw off the bowlines, sail away from the safe harbor. Catch the trade winds in your sails. Explore. Dream. Discover.” – Mark Twain

Things I Have Learned In Croatia

At the entrance to the Rector’s Palace in Dubrovnik, there is a sign from the middle ages that says, “keep your personal affairs outside, attend to public business only. “

When entering a jazz concert at the Rector’s Palace, during the Summer Festival, you are handed a program and a moist towelette. (which you will need because there is no air conditioning or windows. You will also be putting cold water on your face during the intermission. ) But it will be worth it, the musicians were great.

At the Dominican church in Dubrovnik the columns are filled in halfway up. This is so you can’t see the ankles of the women as they walked up the stairs.

In the old city in Dubrovnik, you will find War Photo Limited. It is a museum devoted to war photojournalism. The exhibitions are different conflicts throughout the world. The lesson is that war is bad no matter what side you are on.  It is very well done and graphic- not good for children.

American Express is not as welcome in Croatia as American tourists.

Croatians refer to communism as the time of the Yugoslavia.

If you like oysters, you must go and see the oyster beds and have lunch in Ston. Even if you don’t like oysters (me), you should go. If you like wine tasting, you can do that on the way.

If you need to get money from a bank in Dubrovnik any American passport will do.

This is not us.

Georgio Armani has a black yacht.

Walking the walls around the old city  in Dubrovnik is good way to look into people’s backyards and see their plants and  hanging laundry.

If you are walking the walls of the old city, and it is summer,  try not to be behind a hairy sweaty man with his shirt off, where it gets very narrow and crowded.

The Adriatic Sea is twice as salty as the Pacific which is why the fish tastes so much better. They have been soaking in brine for their entire life.

The stone used to build Diocletian’s Palace in 300AD and the stone for the White House both came from the island  of Brac. Diocletian used thousands of Christian slaves, Im not sure what religion the slaves that built the White House were.

Diocletian’s palace, located in Split was built in the fourth century. It  is the most complete Roman ruins of a palace in existence today. . It is not a museum . Three thousand people live and work  on the grounds and there are many shops and restaurants. It is best seen when not besieged  by cruise ships ( the bane of summer travel for me)

Apparently no dogs are allowed in the Palace. 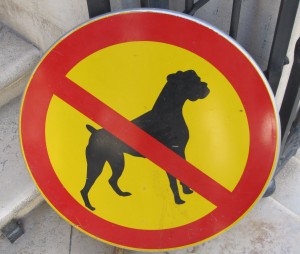 The Meridian Lav in Split is Eastern Europe’s Grand Wailea/Club Med. ( and don’t ever mention Borat here –they don’t think it is funny) 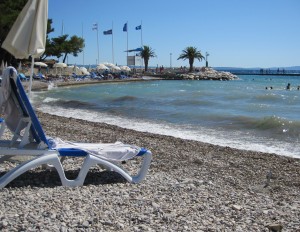 A table with a view of the sea  in Split is a whole different thing. 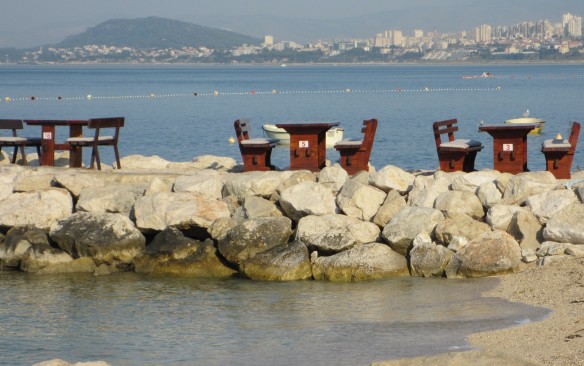 Everywhere in Croatia is a photo opportunity.  Here we are waiting for the  car ferry to Hvar.

I cant get enough of Hvar harbor -a view from the room.

Hvar is the number one grower of high quality lavender. Yes, I brought back a lot of lavender oil.

One of the most beautiful days I have ever had was to rent a boat and go out around Hvar with my daughter . The beaches are rocky but the water is so blue and clean that you don’t mind cutting up your feet.  ( They sell Crocs everywhere  –now I know why)

It is great to eat seafood in a restaurant  in Cavtat when the owner is walking in wearing a bathing suit and carrying the fish. It is not so great to do the meet and greet with the fish beforehand.

My favorite foods are grilled octopus and squid. I was so happy to have it  every day in  Dubrovnik, Hvar and Split. After a while everything becomes like chicken.

On a serious note Dubrovnik and Hvar could be among the most beautiful places in the world and we had a great time.  It has some of the best seafood I have ever eaten.  Croatia  is one of my most favorite places and I can’t wait to go back. (Hvar, Dubrovnik) 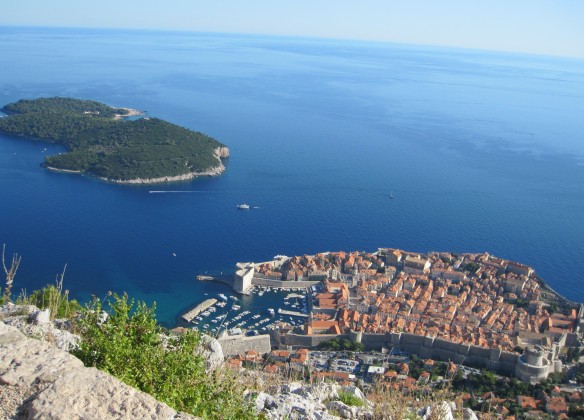