“To create a garden is to search for a better world.  Whether the result is a horticultural masterpiece or a modest vegetable patch, it is based on the expectation of a glorious future. This hope for the future is at the heart of all gardening.”  Marina Schinz

Nothing says hipster in a trendy city neighborhood more than an urban garden plot. Twenty to forty somethings who work in technology, startups or hedge funds are out there on the weekends digging in the dirt.

But urban organic gardens are showing up in some surprisingly unhip neighborhoods in countries around the world. People who don’t have access to a nearby Whole Foods and weekend farmer’s markets are growing food for themselves and their communities. It is changing their lives and the lives of the people around them.

The favelas (slums) of Brazil started after the ‘Guerra de Canudos’ (Canudos War) in Bahia (1895-1896). Government soldiers, who had lived among the favela trees, marched to Rio de Janeiro to await their payment. They settled on what is one of Rio’s hills and renamed the hill ‘Morro da Favela’ after the shrubby tree that thrived at the location of their victory. The government never paid and the soldiers never left and so the first favela came to be. The freed slaves in the late nineteenth century had nowhere to go so they built shacks and were squatters on public and private land. Urbanization in the 1950’s brought mass migration from the countryside for opportunities and employment. The favelas became settlements for the urban poor in the hills of the cities.(Rio) 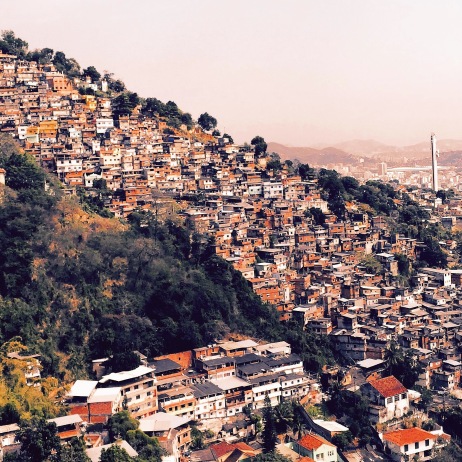 The poor people began to erect hundreds of shantytowns without sanitation, police or electricity. The shacks were made with what they could find, wood, corrugated aluminum and if they were lucky bricks and concrete blocks. Problems of drug trafficking, gangs, crime, disease, government and police corruption, malnutrition, overcrowding, housing and land safety were rampant. Favelas in Rio are easy to spot. It is a word you will hear during the Olympic coverage because they are very present in the city. 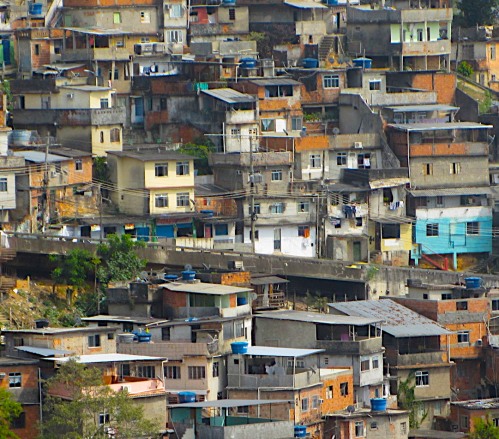 In São Paulo they are on the outskirts of the city. Eventually the Brazilian government stepped in and though the land that most of the favelas are on are considered illegal and unsafe for housing, the city put in electricity and sanitation. They are trying to clean them up and build better housing and public programs but with so many people living below the poverty line it is an ongoing process. 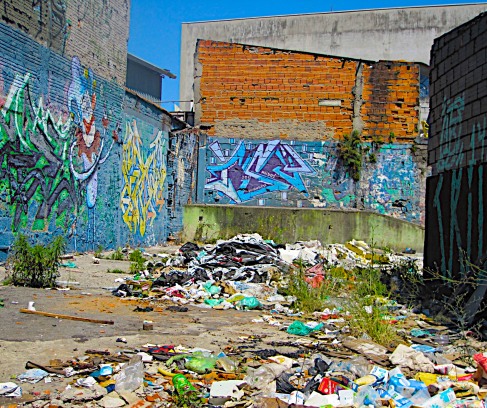 How does change happen in communities like these? It happens by creating programs that teach problem solving, teamwork. financial responsibility and job training. Programs need to be focused on physical health and well-being. You have to involve the local community. The people who live in the favelas have a build your own mentality and a do it yourself community spirit so the right kind of help can make a difference, .

Cities Without Hunger is building community organic gardens in the favelas in the East Zone of São Paulo. They developed community gardens, school gardens and greenhouses on public and private unused land. The gardeners are selling their fresh vegetables to the residents in the favelas at a fair price. Some restaurants have bought as well but the community comes first. I was lucky to be given a tour of a few of the gardens by Hans DieterTemp, Jonas Steinfeld and the people in the favelas who proudly and successfully run their gardens and produce business. Jonas Steinfeld came as a volunteer from Germany and has stayed on as an employee. We were glad to have him translating.

We saw three gardens The first was Horta Sao Mateus. Four families take care of it. It is run by Genival de Farias who spent a long time explaining how the garden worked.

Senhor Genival was talking about the fact that no one wants to use the land under the power lines so that is where they put their garden.

They grow mostly leafy green vegetables which I was told grow fast which makes them a good thing to plant. They also have a variety of medicinal herbs and organic bananas. 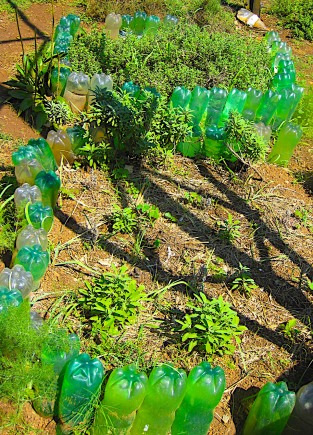 This one was run by Jose Vieira Aparecida and his family. (Anyone who knows me, knows how much I love that pot).

It was his mother who started to plant herbs on this abandoned area and Cities With Hunger helped them turn it into an urban farm. (happy customers)

They plant lettuce which they say sells best in the neighborhood. Señhor Jose told me that he used to be very fat and unhealthy until he started working in the garden.

We had lunch at the third garden Horta Da Tia Bela. First we went to their home where they were cooking lunch. 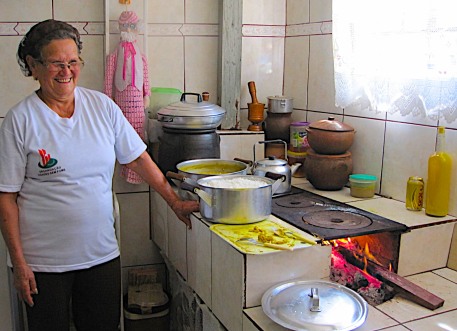 Dona Florisbela Azevedo Silva  and family cooked a beautiful healthy meal with fruit and vegetables from the garden.

I loved the green papaya dessert. 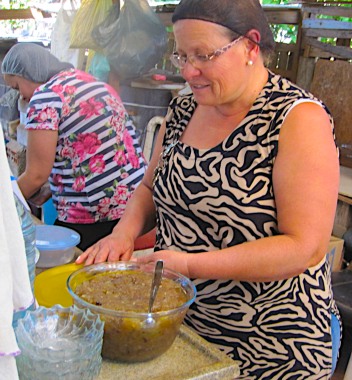 Dona Florisbela and her husband Senhor Valdomiro work in the garden everyday. He is 92 years old.

They transformed a garbage dump into a working farm complete with chickens. (It’s an egg tree) 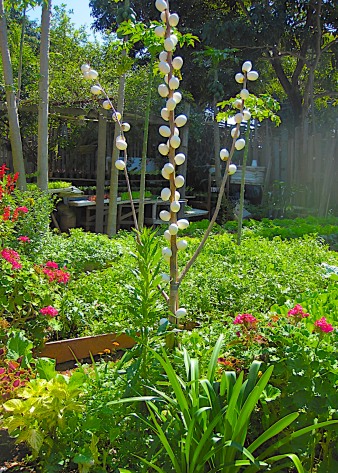 It is said that the one quality necessary for success is persistence, to persevere in the face of all odds. That is what these people and these gardens represented to me. The self-esteem, pride, laughter, friendliness, sense of humor and confidence they have all come from working hard, building something that was not there before and knowing that they are doing a good a job.

It seems like such a good solution to ease some of the poverty in the favelas. Brazil has a good climate for agriculture. It isn’t as easy in Brazil as it is in the States to set up and get funding for these programs. There is a lot of government red tape and corruption and changes take a long time. It is hard  watching them spend so much money on building for the Olympics when programs like this could really make a difference. The gap between the rich and poor in Latin America has always been a big problem with Brazil leading the pack. This is a great organization to get involved with and if you want to help or have any questions you should definitely  contact them.
The website is Cities without Hunger and twenty-eight dollars will buy seeds for a year. http://cidadessemfome.org/en/

Thank you to all the people who opened up their gardens and made the delicious lunch. It was my honor to spend some time with you.