“I’m nothing. I’ll always be nothing.I can’t want to be something.

But I have in me all the dreams of the world.” Fernando Pessoa

I was looking on the internet for interesting things to do in Lisbon and there was a tour with Lisboa Autentica http://lisboaautentica.com/en/ of Fernando Pessoa’s Lisbon. Fernando Pessoa was a famous writer and poet in Portuguese speaking countries.  Seeing a city through the eyes of its artists, writers or chefs  is always the way I want to see  a city.

I started reading the Book Of Disquiet and realized that I was reading something amazing. The story is hard to describe. It is a fictional autobiography which deals with the meaning of life and the quest and topics that go with that. The poetic language in which he tells his story is brilliant. A great book to me is when I read it and think that I feel the same way. This made me very interested about who Fernando Pessoa was in Portugal.

The tour was available on my first morning in Lisbon. It was going to be my introduction to the city. I jumped in a taxi and headed to the Cafe Brasilia in Chiado, a heavily touristic area. 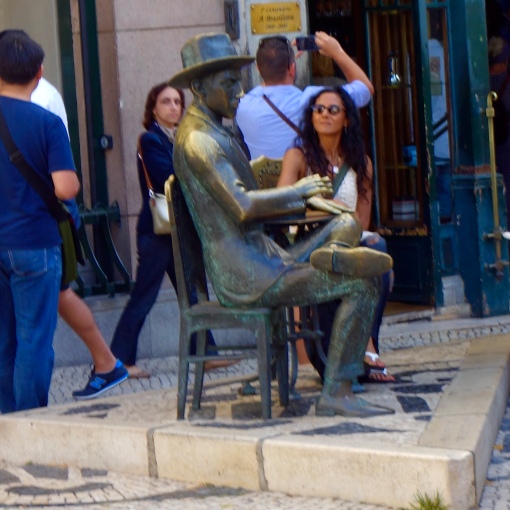 Many of Pessoa’s poems were written in coffee shops – at Brasileira in Chiado or in Terreiro do Passo’s Martinho da Arcada.  There is a bronze statue of him at his favorite table outside the Cafe Brasilia. 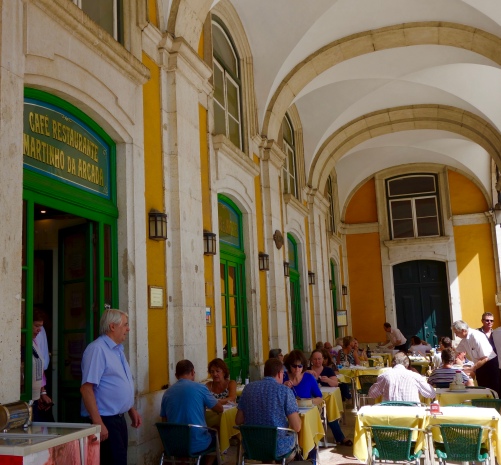 The tour guide turned out to be  a person who had put his soul into learning about Fernando Pessoa. Fabrizio Boscaglia had come from Italy to the University of Portugal where he received his PhD in Philosophy.  He was part of the group of researchers who digitalized Fernando Pessoa’s private library and wrote his doctoral thesis about him. I was introduced to Fernando Pessoa through the eyes of someone who’s passion and enthusiasm for his writing had led him to this path. 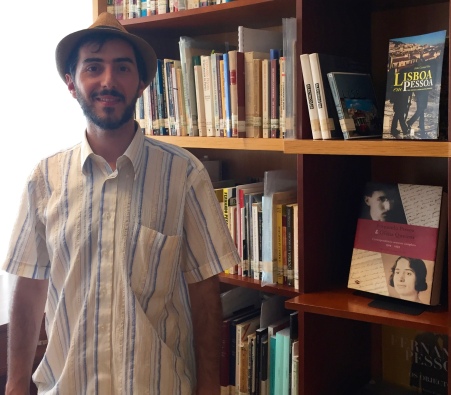 As we walk the cobblestone streets of Chiado we pass the book headed statue in front of the place of his birth and the “office” where  from the Book Of Disquiet worked. 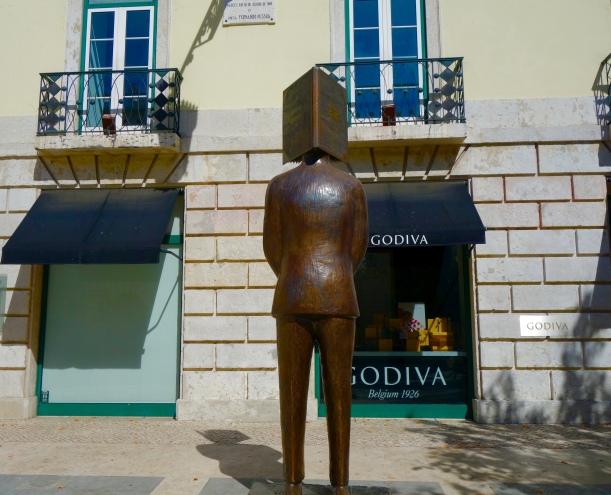 Fernando Pessoa  not only wrote under different names, he created different characters or personalities for them. He called them heteronyms. (heteronomonos) I think they were fragments of his personality. These poets  he created were also some of the great writers of Portugal. They had their own birth dates, life stories, jobs, astrological charts and literary style quite different from each other. Many of them wrote incredibly beautiful poems.  Pessoa who started a literary magazine also critiqued them. Some he liked better than others. There were at least seventy-eight heteronyms and probably many more. 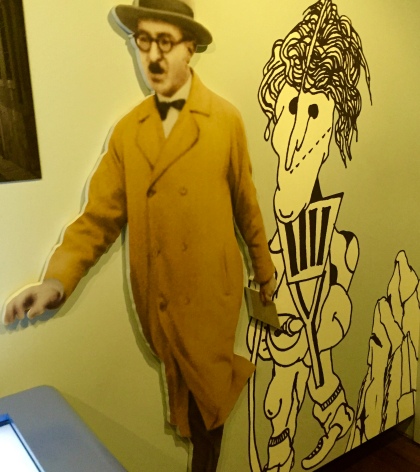 We walk passed the beautiful Manueline Church, Opera House and Theatre as Fabrizio tells us about his life. 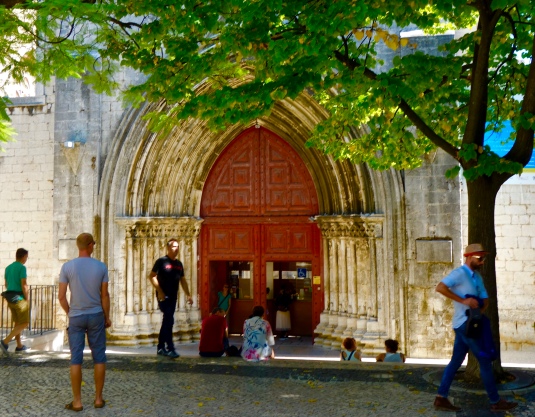 Fernando Pessoa moved to  Durban, South Africa when he was five years old with his mother’s new husband who was  with the consulate. He lived there until he was seventeen. I had just returned from South Africa so I can picture him there. 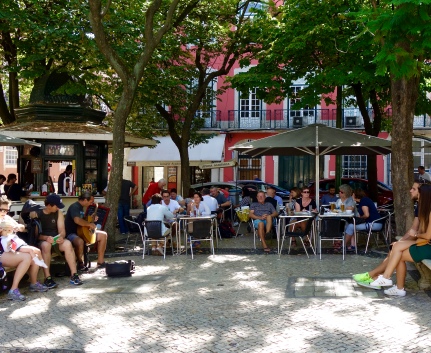 We  continue near the  places that Pessoa used to meet his lover Ophelia and the bars where he drank with his friends. 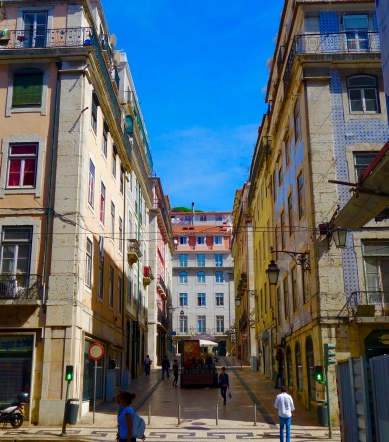 Fabrizio saw my interest and offered me the “advanced Fernando Pessoa tour” usually given in Portuguese. I was in.  What better way to understand Fernando Pessoa and see Old Lisbon  than with someone who cared so deeply about him. 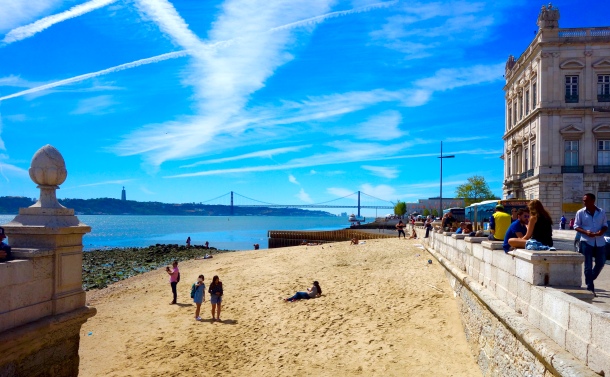 We meet a few days later in the Alfama district  of Lisbon, which is a maze of beautiful  narrow uphill streets. 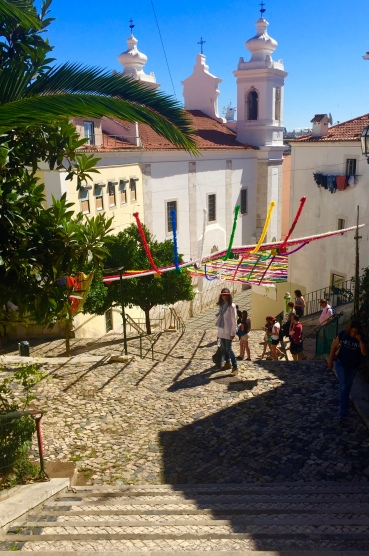 The city’s poorest residents, dock workers and sailors once lived there. It is now gentrified and trendy but still charming. There are several historic buildings and churches and one of the most beautiful views of Lisbon is here. 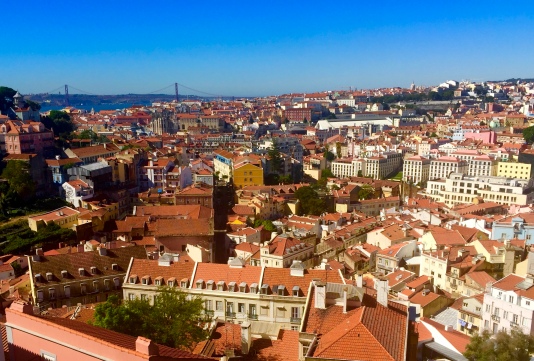 The Thieves Market -Fiera De Ladra happens every Tuesday and Friday.  It is a flea market full of junk and treasures.  A market had been in that spot had  since the seventeenth century. 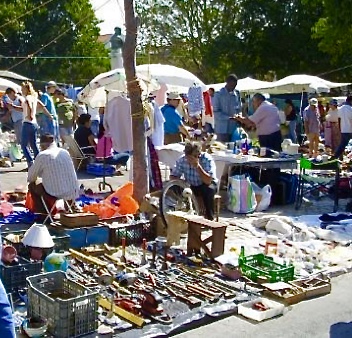 Fabrizio continues to tell me stories and little known facts about Fernando Pessoa as we navigate the picturesque streets as he once did. 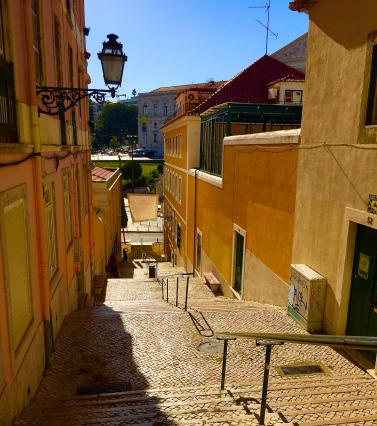 Casa Fernando Pessoa  is the house where Fernando Pessoa lived. Outside is a café with quotes from his poetry. Inside is a museum with his private objects, interactive exhibits, a small bookstore and a library. 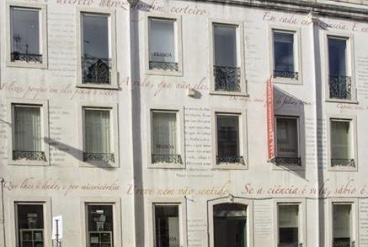 One side of the library is dedicated to Fernando Pessoa books. Fabrizio shows me the book he published and is about to publish another one. The other side is a poetry section with books of poems from all over the world. 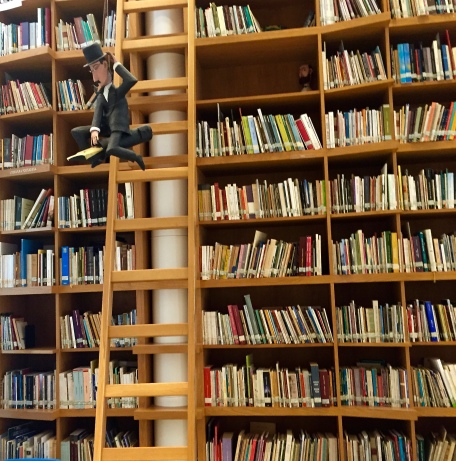 Fernando Pessoa published one book of poems in his life time  called Mesagem. He died a penniless alcoholic. 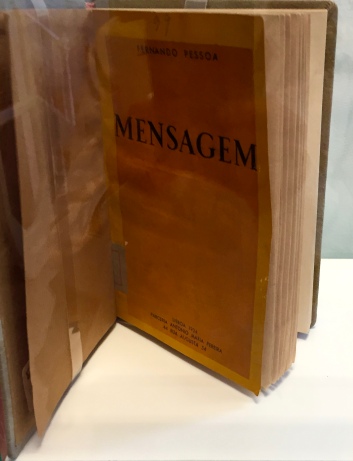 The manuscript for the Book Of Disquiet was found in a trunk after his death along with many other unpublished works. 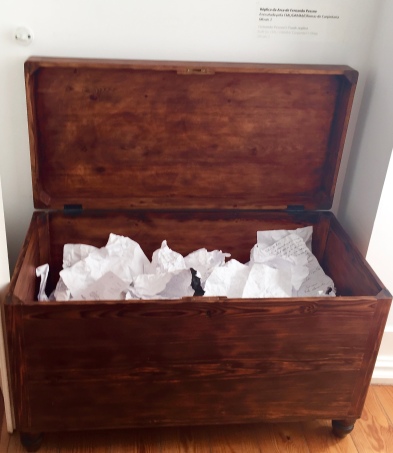 Pessoa is so important to modern Portuguese culture that he is buried in the 500-year-old Jerónimos Monastery, one of the most important buildings in all of Portugal, under a simple memorial. 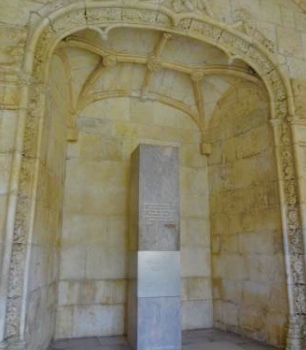 I highly recommend taking the Fernando Pessoa tour with Fabrizio. He speaks so passionately that you become absorbed in the story. It is not often that you find a tour guide so educated in a subject and with such a unique perspective.  He is also a really nice guy.  It was an honor to see Lisbon with him.