The Long Walk to Freedom in Johannesburg, South Africa

“Our daily deeds as ordinary South Africans must produce an actual South African reality that will reinforce humanity’s belief in justice, strengthen its confidence in the nobility of the human soul, and sustain all our hopes for a glorious life for all. ~”Nelson Mandela

I’m staying at the Saxon Hotel in Johannesburg. It is in the upmarket neighborhood of Sandhurst. The hotel is a unique blend of contemporary design,African art, and South African cultural heritage.In 1990 it became Nelson Mandela’s first residence after his 27-year-incarceration. The luxurious Joburg home was provided by a businessman named Doug Steyn.

It was here that Mandela started writing his book “Long Walk to Freedom”. It is fascinating to see the many drawings (copied from original photos) on the hotel’s walls in the lobby, library and corridors. They give some insight into rather recent South African history.. 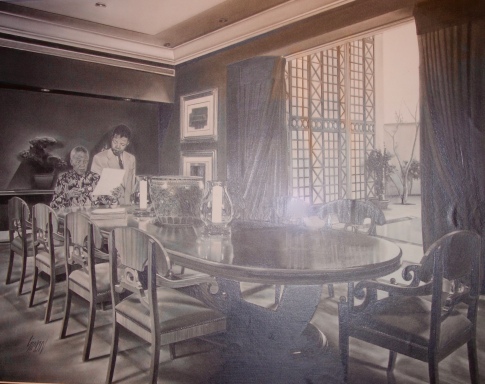 The Apartheid Museum is a difficult place that you must absolutely visit to understand the country of South Africa. Your ticket specifies which door you will enter and what first experience you will have.

This museum helps one comprehend what happened to Mandela and the ANS.

It is a state-of-the-art tribute to the rise and fall of apartheid. Twenty-two exhibition areas take the visitor on an emotional journey through a state-sanctioned system based on racial discrimination.

It was put together on a seven-hectare site by a team of curators, film-makers, historians, designers and architects. Film footage, photographs, text panels and artifacts depict the story. 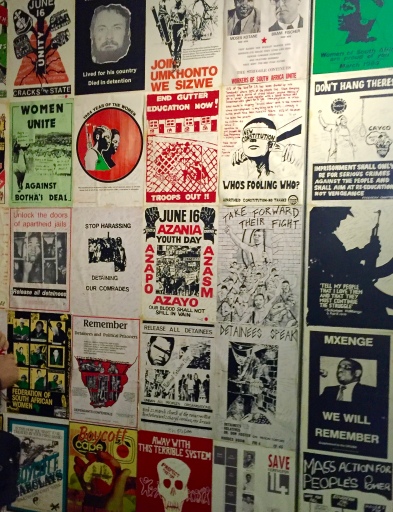 When you leave the museum, visitors are invited to take a stone from the left and place it on the growing pile of stones on the right as a commitment to fighting against racism and discrimination.

Mandela’s humble house in Orlando West, Soweto is where he lived as a free man. It is located at 8115 Vilakazi Street and has been turned into the Mandela Family Museum.

It houses an assortment of memorabilia, paintings, photographs and collection of honorary doctorates bestowed on Mandela from universities around the world. You are always taken around by a guide.

When Winnie Madikizela married Mandela in 1958, she then moved into this Soweto home. Winnie Mandela spent many years here being harassed by the Apartheid Police.

Mandela seldom stayed here as he was living life on the run. But it was the house he returned to after his release from prison in February 1990. 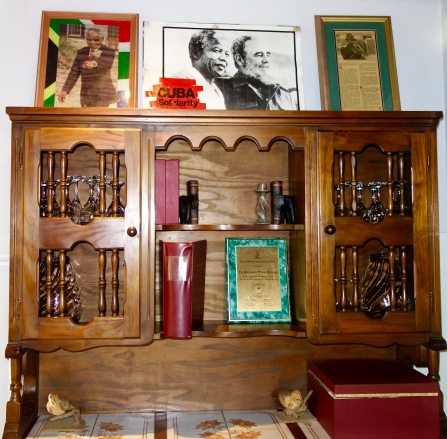 .”It was only then that I knew in my heart I had left prison,” he said in “Long Walk to Freedom.” “For me, no. 8115 was the centre of my world, the place marked with an X in my mental geography.”

Archbishop Desmond Tutu has a house on the same street. Desmond Tutu and his family moved into this house in 1975. Vilakazi Street is said to be the only street in the world where two Nobel Prize winners have lived.

During the time that Tutu lived here he became a Nobel Laureate for his struggles against Apartheid and he led the Truth and Reconciliation Commission for President Mandela. He did not have to live in Soweto which then had very few houses with electricity and running water but did not want to be seen as an “honorary white” living in Houghton at that time. His house is not open to the public. 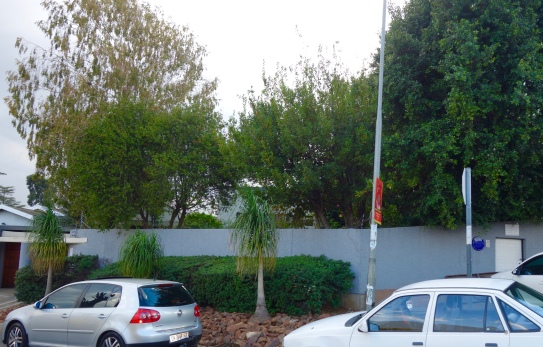 .
The Truth and Reconciliation Commission was set up to deal with what happened under apartheid. It was to record and bear witness to the human rights violations that occurred during that time by both the perpetrators and the victims. It was about amnesty, reparation and rehabilitation. It was considered successful though it had criticism. At least people finally knew what happened to their friends and families and where the bodies were buried.

The Hector Peterson Museum is also located in Orlando West Soweto.Hector Peterson was 12-years-old on June 16, 1976 when he joined his fellow students to protest against the use of Afrikaans in the schools. They were walking and singing the now National Anthem Nkosi Silele Africa, and police open fire. Sam Nima captured this famous image and smuggled the film out in his socks. The photographs were published in the World which was the Soweto newspaper which let to widespread riots and protests throughout South Africa. Hector Peterson, like Rosa Parks became a martyr and the face of the protest. If you have been lucky enough to have never cried in a museum before, you probably will here.

Visiting Constitution Hill is eye-opening. It is the only constitutional court in the world built on land that housed three prisons. They chose to build the tools for democratic society on the pain of the past.

The prisons housed many famous prisoners including Mahatma Gandhi and Nelson Mandela. The court and the great steps are built from the bricks of the old prison. 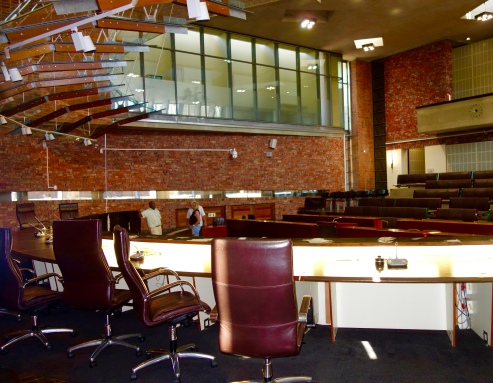 I was stunned to learn that same-sex marriage has been legal in South Africa since 2005.  Additionally, the death penalty was abolished in the early nineties.  The country has always been forward-thinking when it comes to social change.  This is huge when you consider that in Uganda, just a few countries away, homosexuality carries the death penalty.

The collection also includes works by international artists including Marc Chagall.  Each of the pieces have been donated to the Court as tributes to the Constitution and what it means.

The painting that stayed with me was of a blue dress by Judith Mason. She was inspired by the story of activist Phila Ndwandwe  who was shot by the Security Police after being kept naked for weeks in trying to make her an informant. She preserved her dignity by making panties of a blue plastic bag. This garment was found wrapped around her pelvis when they found her skeleton. ‘She simply would not talk’, one of the policeman involved in her death testified at the Truth and Reconciliation commission. ‘God…she was brave.’ That is the only reason we know her story. For me this dress represents all the stories we do not know of all the brave people who fought against apartheid.

The core values of the South African constitution (which also are represented in the seven pillars outside the museum) are spelled out on the walls of this space: equality, responsibility, democracy, diversity, respect, reconciliation, and freedom.

Any time that you get to spend with Darryl is extremely well spent. (hospitalityafrika.com) The man himself is living history who shares his own stories of growing up under apartheid and how he felt when Mandela became President.

He is very knowledgeable about all things Johannesburg – art,history, culture, food and the essence of what it means to live here now. He has so much pride in his city. I spent an amazing few days with him and our great driver Dave and came away with an appreciation of how wonderful Johannesburg is.

5 thoughts on “The Long Walk To Freedom In Johannesburg, South Africa”