“Here, then, is what I wanted to tell you of my architecture. I created it with courage and idealism, but also with an awareness of the fact that what is important is life, friends and attempting to make this unjust world a better place in which to live.” Oscar Niemeyer

I wish I could say I thought of that but I took the title from the Guardian. Maybe some of you not Brits had missed it.

One of Brazil’s greatest architects was Oscar Niemeyer who was known for his curved spaces and ramps. Beauty, spatial drama and lightness was more important to him than functionality. His use of concrete and steel was done in ways that had not been seen before. He died in 2012 at 104, a world-renowned architect, with hundreds of works in Europe, the Americas and Africa.

Niemeyer became a member of the Communist party in 1945. In 1964, when a military coup overthrew the government, Niemeyer was threatened and resettled in France and did not return to Brazil until the end of the military dictatorship in 1985. He designed the communist headquarters in Paris.

Oscar Niemeyer worked alongside Le Corbusier on the UN buildings in New York and his designs for Brasília earned the city a Unesco World Heritage status. Niemeyer received the Pritzker Architecture Prize in 1988, the highest award in the profession, for his Cathedral of Brasília. ( not my photo)

I am a wannabe architect and a fan of beautiful buildings and could not wait to see his structures in Brazil.
Some of Niemeyer’s most famous and recent work can be found in the city of Niterói across the bay from Rio. Niteroi has more buildings designed by him than any other city outside of Brasília where he redesigned the capital city. 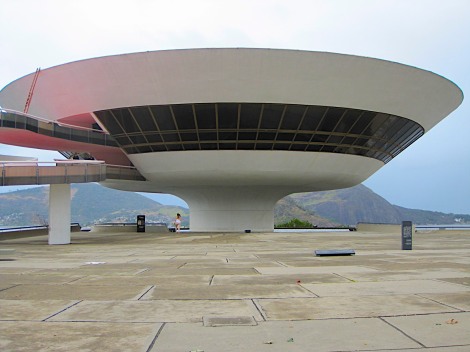 The museum is a direct response to the natural topography of the bay.  The curve of the structure matches the curve of Sugarloaf.

The building is the anti gallery white cube space. You can see the relationship of art, architecture and the surrounding landscape.

The Theatre of Niteroi is another great example of Niemeyer style.

The drawing on the front by Niemeyer is done on each individual tile. 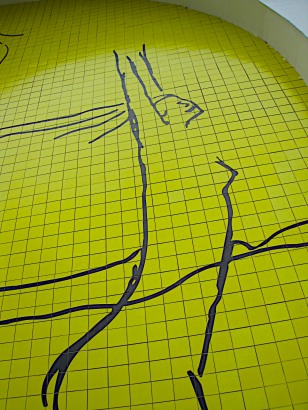 The Bienal was built to host a biannual art exhibition which started in 1951.

São Paulo was the second city in the world after Venice to do this. A major art exhibition is held here every two years.

I had seen photos of the interior before and didn’t recognize it because of the sharp contrast of the completely rectangular patterns on the outside to the flowing circular forms inside. (not my photo) 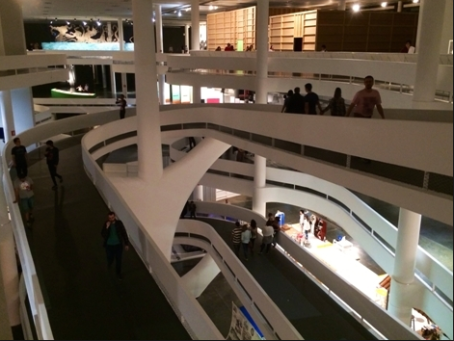 The Marquise was also designed by Niemeyer. It’s a large, covered space that curves through the park behind the Niemeyer buildings and connects the Modern Art Museum to the playground and an outdoor restaurant. It’s used now as a place for people to relax, skate, and rollerblade. 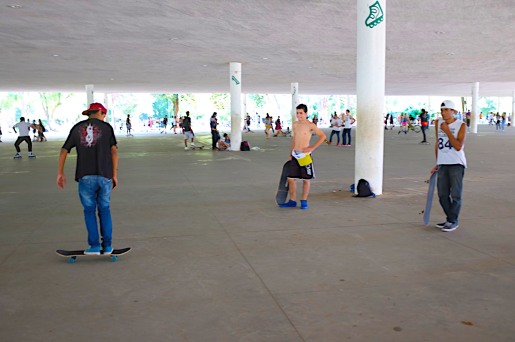 Oscar Niemeyer designed the Oca auditorium in 1951. The white domed structure is now used for traveling art exhibits. The full name is Pavilhão Lucas Nogueira Garcez, and it was built to commemorate the city’s 400th anniversary in 1951.

It is called the “oca” because it resembles the traditional Native American dwelling. 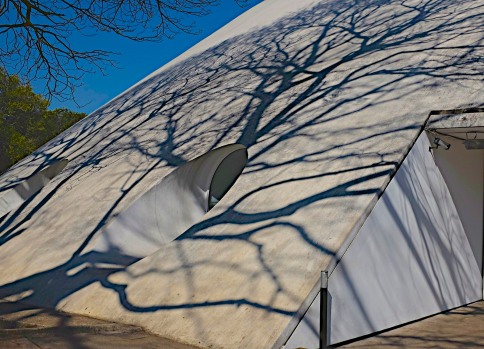 The interior has 4 levels, each connected by a ramp that spirals around.

In 2004 Niemeyer co-designed the Park’s Auditorium with the “giant red tongue”.

This futuristic building was in the original design of the park but was not built until much later.

The Copan was one of Niemeyers early masterpieces. It is an imposing S-shaped building in the Centro district of São Paulo. Having studied some architecture, the Copan for me has always been a symbol of São Paulo. This is the largest residential building in Brazil, and, reportedly, the most populated single residential building in the world with room for seventy businesses on the first floor. It has its own zip code. The downtown area is a bit seedy but i’m sure with gentrification the apartments are being restored.

Niemeyer went to the office everyday to work on his designs and oversee his projects till his death at 104. He believed in using architecture as a way to create a better world through better design.

Special thanks to my guides Arthur Simoes in São Paulo and Gabriel Morand in Rio for their knowledge, patience and stories about an architect that I have admired for a long time.