Temples of Nara and Kamakura, Japan

“Just as treasures are  uncovered from the earth, so virtue appears from good deeds, and wisdom  appears from a pure and peaceful mind. To walk safely through the maze  of human life, one needs the light of wisdom and the guidance of  virtue.“   Buddha

Buddhist monks were in Japan as early as the third century and came along the silk road. The official date was 552 when a Korean delegation arrived with monks, nuns, statues and sutras. Acceptance as with any new thing was slow. But the ruling class took up the faith and encouraged others to join. (I guess that is what Christian Science and Kabbalah hoped Hollywood would do for them)

Buddhism has had an enormous impact on the art and culture of Japan. Japanese Buddhism is the search for fulfillment and ultimate truth, not in any transcendental sphere, but within the structure of secular life, neither denying nor repressing man’s natural feelings, desires or customs. Many traditional arts such as garden design, tea ceremony, flower arranging, and even martial arts developed into the forms they have today because of the religion.

Nara was the first permanent ancient capital of Japan.There are many Unesco World Heritage sites in Nara.

Many of the temples are in Nara Park.

The Toda-ji temple gate is the entrance to Toda-ji which is considered to be a very important temple in the Buddhist world. 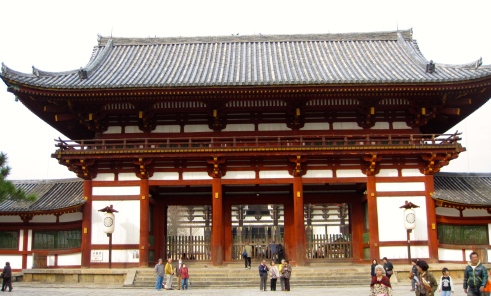 Toda-ji Temple presides over the park and is the world’s largest oldest standing wooden building. It was constructed in 752 and houses a Daibutsu-the largest Buddha in Japan.

The hanging bell of Nara though not the oldest or largest or heaviest is still quite impressive. 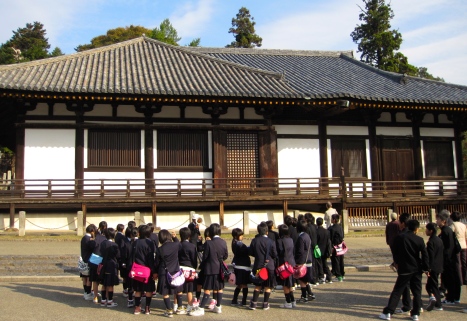 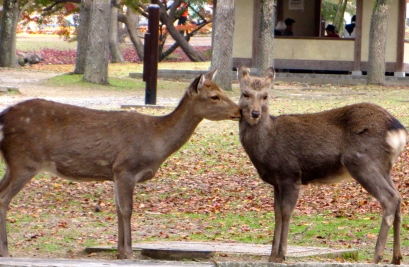 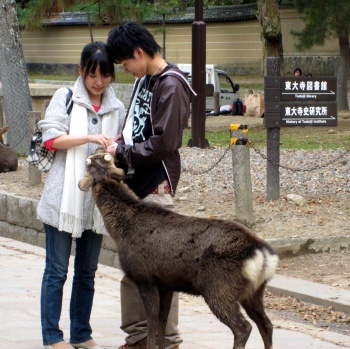 We stop at a teahouse before going to more temples.

Kofuku–ji Temple built in 669 and dismantled was moved to Nara in 710. It features a five-story pagoda and many Buddhist treasures. Today only a handful of the temple’s 175 buildings remain standing, most of which date from the 15th century. The five-story pagoda is the second highest pagoda in Japan.

Kamakura is a small city and a very popular tourist destination. Sometimes called the Kyoto of Eastern Japan, Kamakura offers many temples, shrines and other historical monuments. In addition, Kamakura’s sand beaches attract large crowds during the summer months. (Mt Fuji is in the background. It is good luck to see Mt Fuji)

The Great Buddha of Kamakura (Kamakura Daibutsu) is a bronze statue of Amida Buddha, which stands on the grounds of Kotoku-in Temple. with a height of 13.35 meters. It is the second tallest bronze Buddha statue in Japan, surpassed only by the statue in Nara’s Toda-ji temple. ( indoor Buddha statue above) 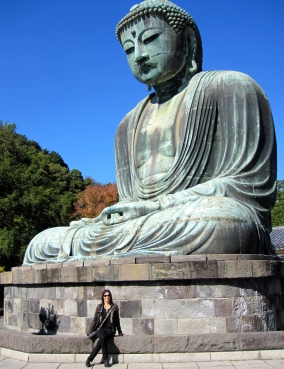 The statue was cast in 1252 and originally located inside a large temple hall. However, the temple buildings were destroyed multiple times by typhoons and a tidal wave in the 14th and 15th centuries. Since 1495, the Buddha has stood in the open air. This is the destination even the Obamas had on their Japan bucket list.

Jufuku–ji is the oldest Zen temple in Kamakura. Although very small now, in its heyday the temple used to have as many as fourteen buildings. Myoan Eisai was a Buddhist priest who was brought to head the temple after it was built. He was credited with bringing Zen Buddhism and green tea from China to Japan.

The main shopping street is Komachi-dori. It is a tiny alley with both authentic and touristy crafts and Japanese food. Snack your way around the pickle shop (radishes, carrots, seaweed, anything) and pick up exquisitely wrapped chestnut candies in the confectioner’s shop. (charcoal store)

Hachimangu shrine is the most important shrine in Kamakura. The shrine is dedicated to Hachiman, the patron god of the Minamoto family and of the samurai in general. The shrine is reached via a long, wide approach that leads from Kamakura’s waterfront through the entire city center, with multiple torii gates along the way. 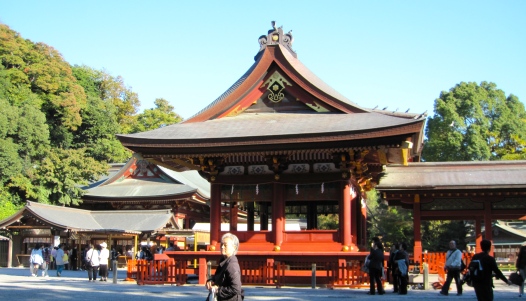 These are two different days. Nara and Kamakura are different cities. Kamakura is forty minutes outside Tokyo. Nara is an hour away from Osaka. After a long day of temples, you can enjoy the local Japanese custom of sleeping on the train home.

Yo I sorano tabi o,

1 thought on “Temples of Nara and Kamakura, Japan”