“Adventures don’t come calling like unexpected cousins calling from out of town. You have to go looking for them.” — unknown

After a beautiful morning on the beach in Varadero,  we drive to Havana. It is two hours away. We see a lot of cars from the fifties, older Russian models, motorbikes and beat up buses filled with people.  Now we are in a business hotel complete with towels, private rooms and toilet paper. I put the toilet paper in my purse and ask for more. I know we will need it later.  One doesn’t come to Cuba for the food (not when Cuba is paying) or the toilets. (one of my favorite songs – Chan Chan from Buena Vista Social Club -if you don’t watch the video listen to the music while you read)

The concert tonight turns out to be at a small theatre in a very poor neighborhood. There is no place to change and the kids change on the bus. We can see into the sparse apartments around us and smell the garbage.. We are surrounded by hordes of kids and give them almost all the candy , pencils and gum we have brought. They are an amazing audience. What they lack in material possessions, they make up in the love and enthusiasm they have for dance.

At the market in the Plaza Del Armas the next day,  I found out that  the Kennedy Kids were the hottest ticket in the festival and it had been sold out way in advance. They were the first American children in twenty years to be in this important dance festival. They represented hope. We were inexplicably famous. They were on the TV and radio news every day. There was a lot of translating to do  so even  with my bad Spanish, I am interpreting for the press.  It was a reality check to see how few people spoke English.   The Cubans loved seeing the American kids walking around and  people asked for their autographs.

One of the many odd things that happened was how surprised the Cubans were to see  “ninos blancos y negros”   (Direct translation black and white children) playing together at the hotels. Apparently performing was one thing. Their  information about the United States,( like their cars) was from the fifties. They didn’t know that things had changed. They were always asking me if they were allowed to be friends.

The Plaza del Armas  (literally weapons plaza)  is in Old Havana. It is a main square surrounded by crumbling buildings. Horse and carriages (in need of repairs) wait to take you around the old city. El Floridita (made famous by Hemingway) is there.  In the cathedral square is a market selling crafts, books and paintings.  I am there every day. 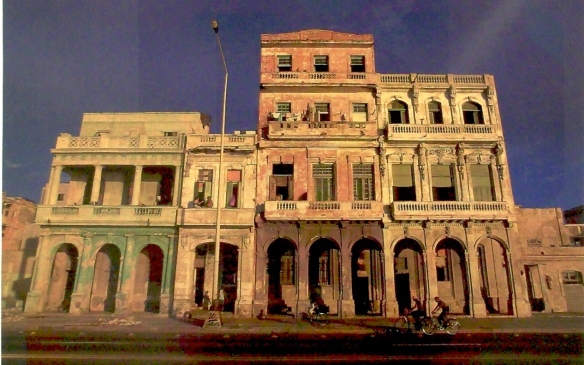 We spend a few days  in Havana. Fidel gets his money’s worth. If the kids  are  not performing, they are watching other  children perform. In the daytime, they performed at hospitals, orphanages, schools and the Young Pioneer Headquarters.

The mission of the Pioneers  in every Communist country is to indoctrinate the young in Communist ideology. At first it felt creepy being at those headquarters seeing only what we were supposed to see. After a day with young pioneer children and teachers, they made us honorary pioneers  by tying the scarves around our necks. We were happy to join our new friends. Our group picture is probably among their photos. ( It was the year before Elian Gonzales. We saw the photos of all the Young Pioneers on the news with our neckscarves waving their fists and wondered if we knew them) (the American Pioneers)

We go to see Giselle performed by Alessandro Ferry of ABT and the Cuban Ballet Company at the National Theatre of Cuba . It is a huge modern building, decorated with works by Cuban artists. The kids are exhausted and are all asleep when the lights go on at intermission.

It was a beautiful ballet performance – again everyone is talking about it at the Plaza de Armas the next day.  It is amazing  to be in a country that loves ballet.  Many of the wood carvings in the market are dancers.  The others are cars and cigar related things.

The American Ambassador (yes there is one) finds out that American children are in Cuba and prepares a dinner party. There is a lot of security. They take our purses and cameras in the afternoon.  He rounds up the Americans in Cuba. The Alvin Ailey Company, some documentary filmmakers, any Americans working in Havana ( there are some) , Alicia Alonso and some of the Cuban Ballet Dancers. The ambassador turns out to be from Pasadena, California. We are also  traveling with Fayard Nicholas ( of the  famous tapping Nicholas brothers) He is there telling stories of dancing in Cuba in fifties. It is a wonderful night with good food. (Alicia Alonso -Director of the Cuban Ballet Company and Arlene Kennedy, Fayard Nicholas and Alvin Ailey Dancers, Kennedy Dancers)

The girls take a ballet class  at the Cuban Ballet School (an old Havana mansion) with members of the Cuban ballet. The school, run by Alicia Alonso has turned out some of the best ballet dancers in the world.  They combine Cuban sensuality with classical training.  The many dancers  who defect to the west  is a very painful thing for them.  The company stars who were there when we were, now dance in the US. The school dates back to the Ballet School of the Sociedad Pro-Arte Musical de La Habana, founded in 1931, where Prima Bailerina Allicia Alonso received her earliest ballet classes. In 1962, the National School of Ballet was created as part of the National School of Art . Like all the Cuban educational systems, the  ballet training in this country is free. 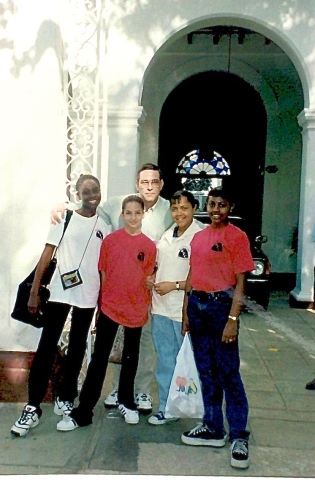 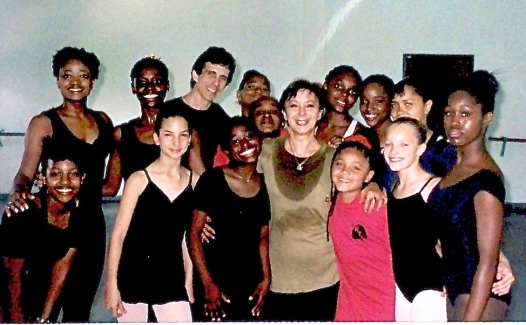 We saw other ballet performances at  the Gran Teatro de Habana.  Someone performs a dance to the Internationale – the communist anthem. The solidarity clap begins. The audience stands and many people have tears in their eyes. (The Internationale)

This prominent theater is located on the site of the former Teatro Tacón in the Paseo de Martí (Prado), in a neo baroque building known as the Palacio del Centro Gallego. It is beautiful and crumbling.(as is much of Cuba). The García Lorca auditorium provides a magnificent stage for the Cuban National Ballet Company, as well as other dance and musical performances.

The Kennedy Tap Kids and the Alvin Ailey  company perform the next night at  a modern theatre in Havana – the Mella Theatre. It is named after revolutionary hero and dissident Julio Antonio Mella, assassinated in Mexico in 1929 under orders of then Cuban dictator Gerardo Machado. This is a modern building with a conventional stage and seating for 1475 attendees. It hosts a variety of shows, from cabaret to recitals as well as theatre performances.

By then we are pros. We sit in the first row and start the standing ovation and  the solidarity clap. American dance moms know how to get a crowd going. !!!!

2 thoughts on “Theaters of Havana, Cuba”