Things I Have  Learned in  Kyoto, Japan

“The way is not in the sky. The way is in the heart.”  ~ Buddha

Kyoto is the headquarters of Nintendo.

Kyoto has almost 2000 Buddhist and Shinto shrines and temples. I haven’t seen them all – yet. ( female monks ) 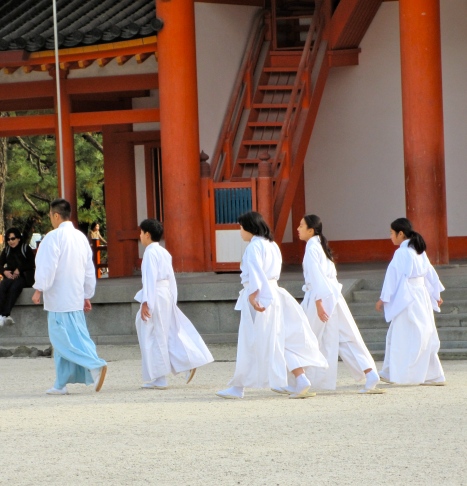 Sanjusangendo is a 12th century temple (partly rebuilt in the 13th century after a fire) and it has 1000 identical life-sized Buddha statues arranged in 10 rows by 100 columns. In front and around some of these columns there are also 28 unique statues of guardian deities. Directly in the centre of these 1000 statues there sits an impressive giant Buddha statue covered in gold. Don’t go if you happen to  be allergic to smoke.  It also has a thousand candles. 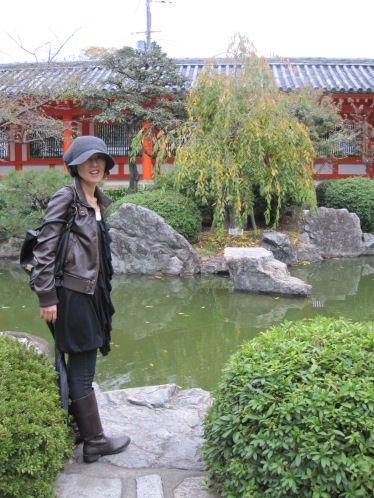 Ryoan-ji Temple’s dry rock garden is a puzzle. Nobody knows who designed it or what the meaning is of the 15 rocks scattered across its expanse of raked white gravel. Some academics say they represent a tiger carrying a cub across a stream; others believe they depict an ocean accented with small islands or the sky dotted with clouds. There’s even a theory that the rocks form a map of Chinese Zen monasteries. The only thing scholars do agree on is that Ryoan-ji is one of the finest examples of Zen landscaping in the country. You could stay there for years quietly contemplating the garden’s riddles and still get no nearer to an answer, and maybe that’s the point. 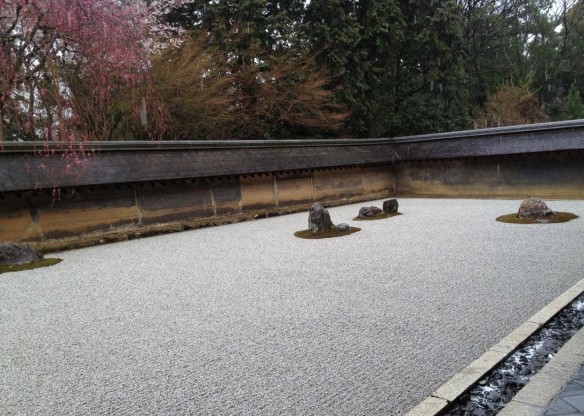 Downtown Kyoto is quite ugly. 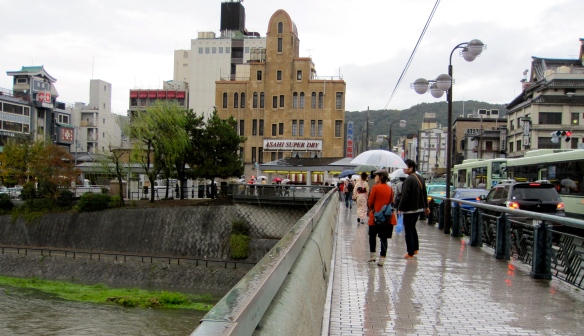 Uji is known for the production of high quality green tea.  It has many tea houses and is a great place to sample green tea, green tea desserts, green tea mochi, green tea cakes, green tea soba and green tea ice cream. Byodo-in Temple is there and is also on the back of the ten yen coin. 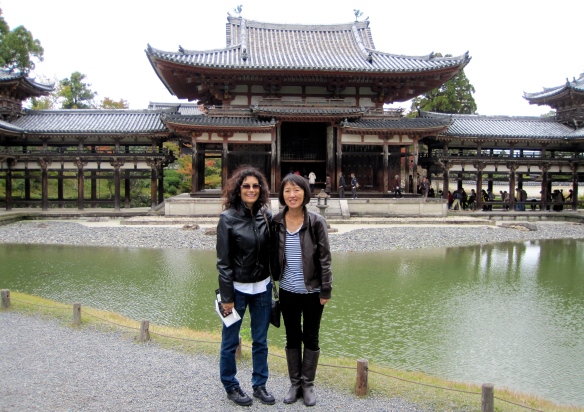 Many stores and restaurants  in Uji  are closed on Monday which makes it the time to go ( not crowded) and not to go. (looking for a restaurant) 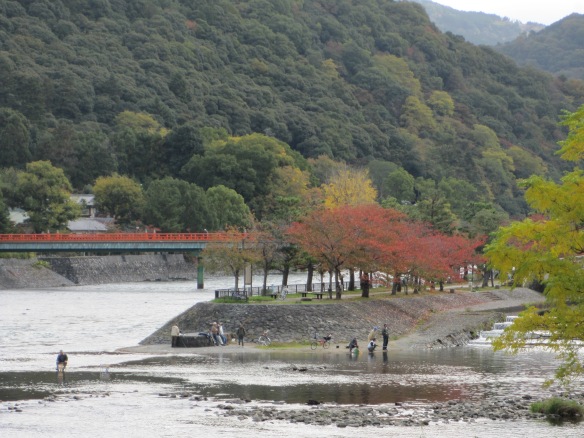 Kyoto was never bombed during World War Two. You can still find 100-year-old streets and lots of old wooden buildings. Some of the structures have withstood earthquakes and have no nails.

Kyoto is Japan’s craft capital, where skills are still passed down through generations. Tiny specialty shops in Shijo Dori, Kawaramachi Dori and the Kyoto Handicraft Center  have Yuzen-dyed fabrics,wooden combs, fans and everything you need to host a tea ceremony.  Shinmonzen Dori and Furumonzen Dori and are filled with antique shops and galleries selling woodblock prints. The department stores around Shijo Kawaramachi intersection and Kyoto train station are good places for lacquerware and kimonos. 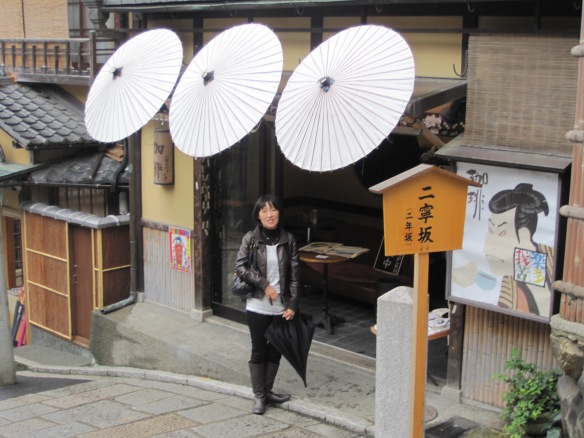 The 7-5-3- festival occurs  around Nov fifteenth.   Five-year-old boys and seven or three-year-old girls are taken to the local shrine to pray for their safe and healthy future. This festival started because of the belief that children of certain ages were especially prone to bad luck and hence in need of divine protection. Children are usually dressed in traditional clothing for the occasion and after visiting the shrine many people buy chitose-ame (“thousand-year candy”) sold at the shrine. 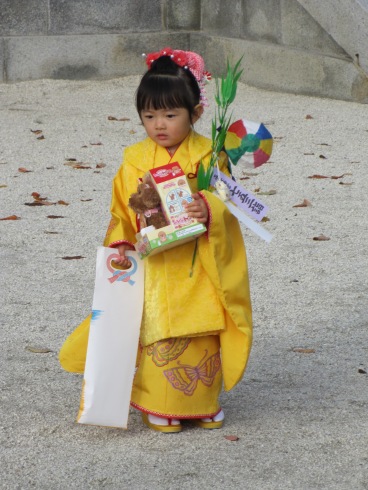 The most famous  Buddhist temples in Kyoto  are Ginkaku -ji and Kinkaku -ji (the gold and silver pavilion).  I bet they are a lot more beautiful when it isn’t raining. 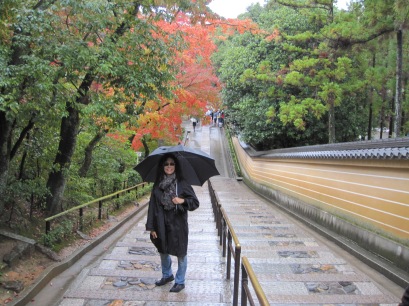 Kinkaku-ji is a Zen Buddhist temple .  it is  the Gold Pavilion. The garden complex is an excellent example of a Muromachi period garden. The Muromachi period is considered to be a classical age of Japanese garden design. The correlation between buildings and its settings were greatly emphasized during this period. It was a way to integrate the structure within the landscape in an artistic way. The garden designs were characterized by a reduction in scale, a more central purpose, and a distinct setting. A minimalistic approach was brought to the garden design, by recreating larger landscapes in a smaller scale around a structure. 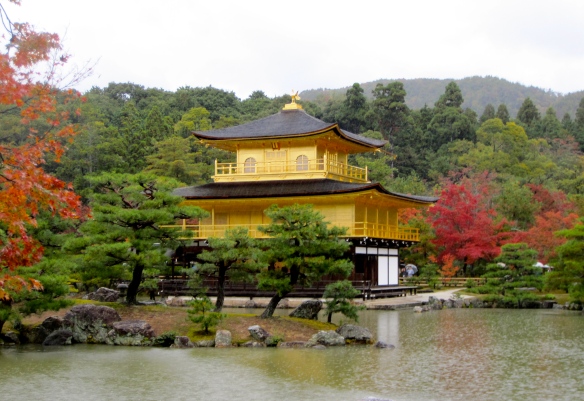 The Golden Pavilion was built to house some of Buddha’s ashes..There you’ll witness the flow of Japanese people of all ages praying, paying homage, writing their wishes on colorful ema boards, and buying special charms called omamori in hopes that their aspirations of finding a spouse or succeeding in an exam will someday be fulfilled. (i see my ema board it is one of the few non japanese ones!!!!) 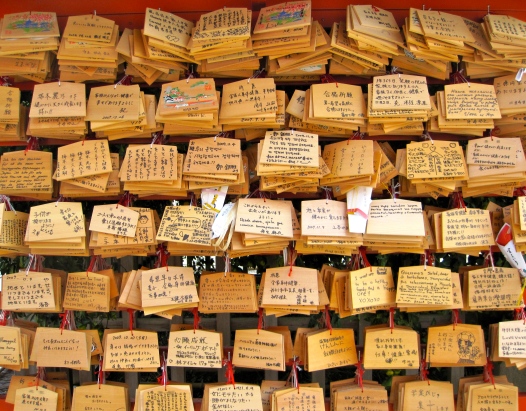 You will see a lot of school children with their classes at all the temples in Kyoto in November. It is the time for luck and they are all praying for good grades. 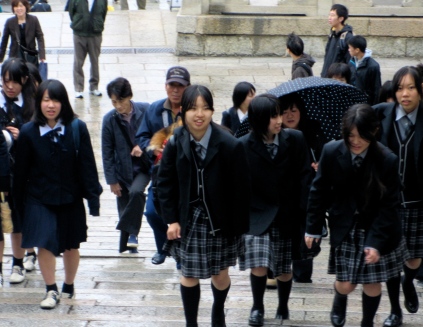 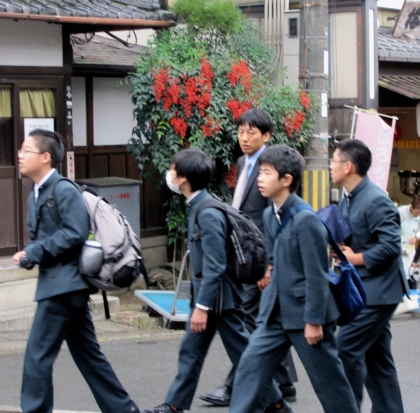 Ginkaku-ji is the Silver Pavilion..  The tea ceremony is said to have originated here. The exterior of the pavilion was originally going to be covered in silver foil, in emulation of the Golden Pavilion (14th century) at Kinkaku – ji. Without ever having enjoyed a coating of silver, the Silver Pavilion is one of the most graceful structures ever built. 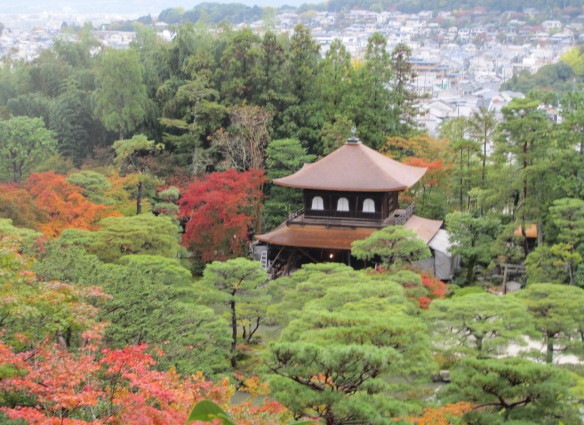 Kiyomizudera Temple  contains several other shrines, notably Jishu-Jinja, dedicated to Okuninushino-Mikoto, a god of love and “good matches”. Jishu-jinja possesses a pair of “love stones” placed 18 meter apart, which lonely visitors attempt to walk between with their eyes closed. Success in reaching the other stone, eyes closed, is taken as a prediction that the pilgrim will find love. One can be assisted in the crossing, but this is taken to mean that an intermediary will be needed. The person’s romantic interest can assist them as well.  It is the highlight of the yearly school trips to the temples for luck in exams. 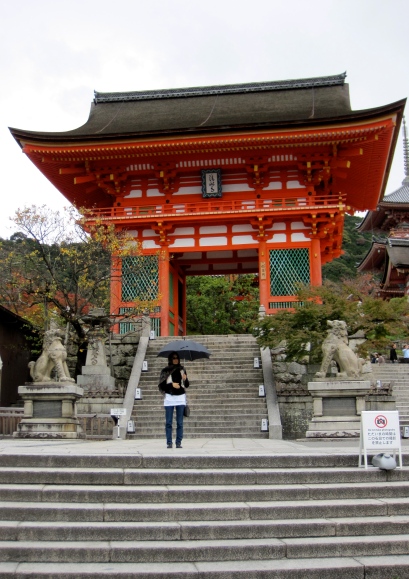 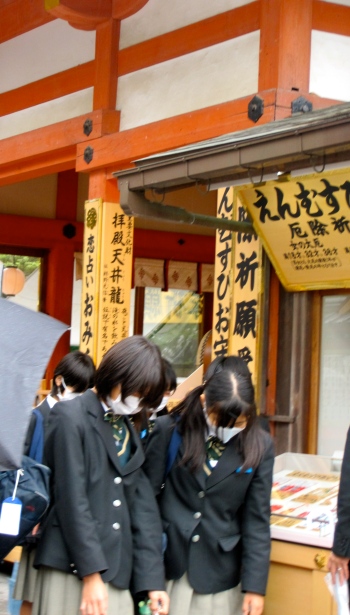 Here is the famous love stone. 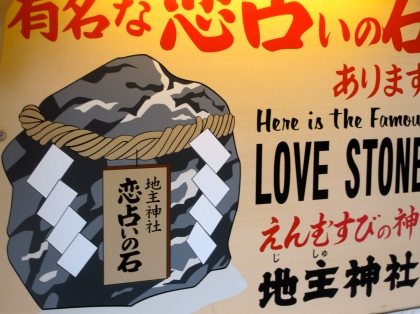 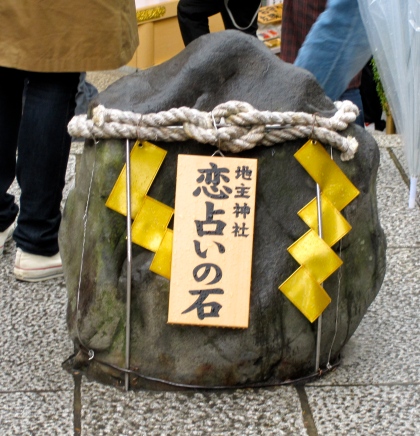 It’s not the only geisha district left in Japan, but Gion, a collection of streets defined by its old wooden buildings, tea houses and exclusive Japanese restaurants, is by far the most famous. Spend an hour wandering the area and chances are you’ll glimpse a geisha or two shuffling between tea houses in their cumbersome zori sandals and exquisite kimono. Much to their annoyance, you’ll probably see camera-happy Japanese tourists stalking them too. 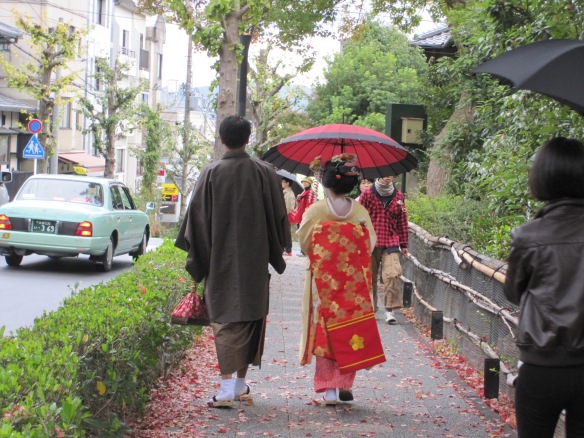 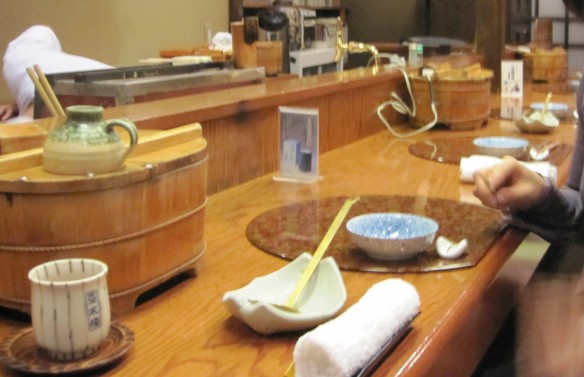 Few museums are as hands-on as this old elementary school turned shrine to manga, or comic books, and its collection of some 300,000 comics and manga-related exhibits. Visitors can read any piece of manga they want at the  Kyoto International Manga Museum  from the towering wooden bookcases that line every wall and hallway. Some read propped up against the walls or sitting crossed legged on the floor; others hunker down with a coffee at the museum’s wood-decked outdoor café. The eclectic and universally transfixed crowd is a testament to how much a part of mainstream Japanese culture manga has become. http://www.kyotomm.com/english/ 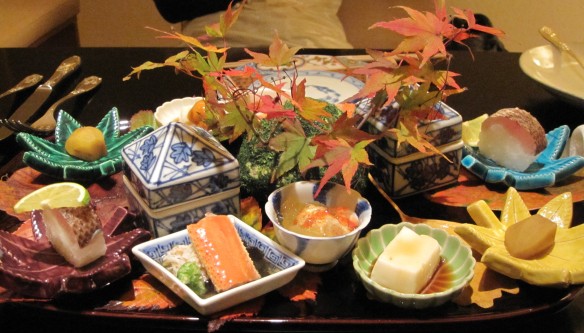 It’s touristy, and  tacky, but dressing up as a samurai and watching TV actors hamming it up on set does hold a certain charm. Eigamura or Kyoto Toei Studio Park to give it its English name, is a working TV and movie set that doubles as a theme park, where besides dressing up in period costume you can wander around a mock-up Edo-era samurai town and take in exhibitions of the well-known TV series and films shot here.It’s the live studio performances, however, that steal the show. The sword fights are extravagant, the facial expressions and body language overly dramatic, and the dialog at times delivered about as convincingly as an elementary school end-of-year play. It’s Japanese kitsch at its finest. Quentin Tarantino would love it. http://www.toei-eigamura.com/en/

(Heian Jingū) Heian Shrine  was  1895  and is dedicated to the spirits of the first and last emperors who reigned from the city,  A giant torii gate marks the approach to the shrine, The real shrine grounds themselves are very spacious, with a wide open court at the center. The shrine’s main buildings are a partial replica of the original Imperial Palace from the Heian Period built on a somewhat smaller scale than the original. 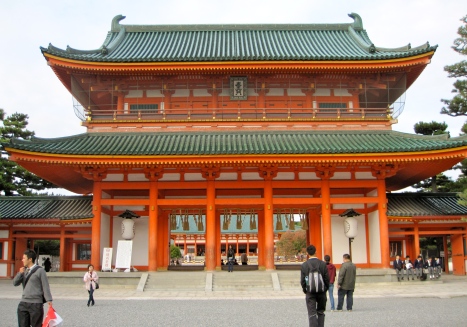 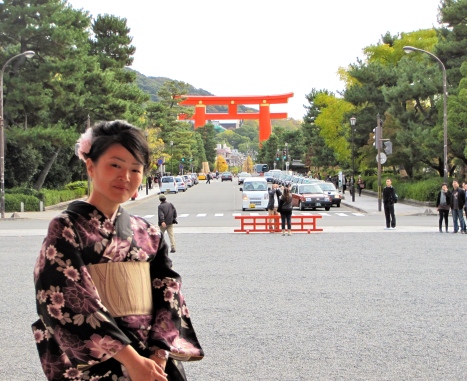 Behind the main buildings there is an attractive, paid garden with a variety of plants, ponds and traditional buildings. The garden’s most striking feature are its many weeping cherry trees which bloom a few days later than most other cherry trees, making the garden one of the best   around the tail end of the season, which is usually around mid April. 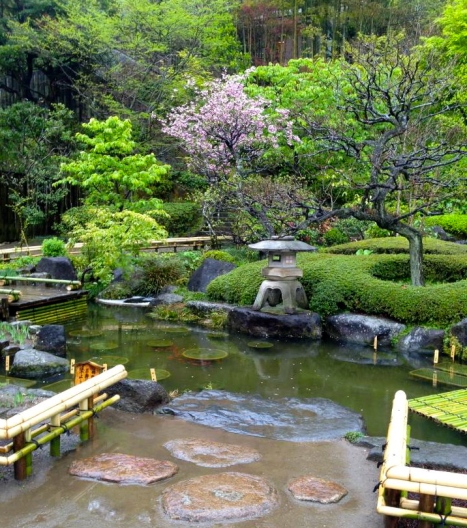 Omikuji are paper fortunes that can be bought at both shrines and temples. The fortunes range from great good luck to great bad luck. There are trees to tie the fortunes to avert the bad luck if you are unlucky enough to draw that fortune. 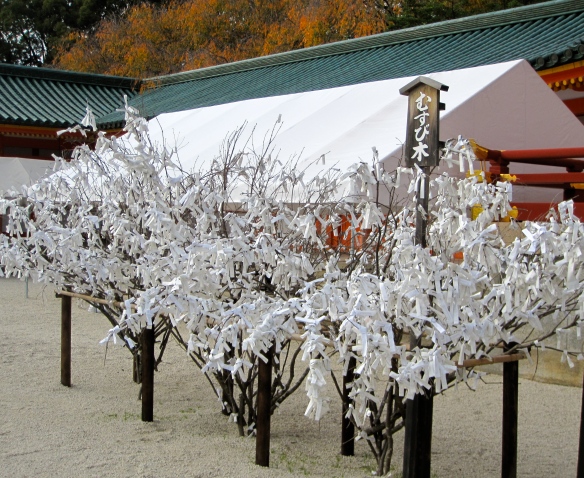 One of my fortunes is framed in my house. The others might be on a tree. The  thing about luck is that it always changes.

for more info go to

3 thoughts on “Things I Have Learned In Kyoto, Japan”