Things I Have learned In Oaxaca, Mexico

Oaxaca is pronounced Wa-Hoc-A. Except in the Mexico City Airport when they are translating into English and they say O–Ax-A-Ca. People who live in Oaxaca are called “Oaxaquenos’.  (Photo © Ben Goodman / licensed by Culture Xplorers) 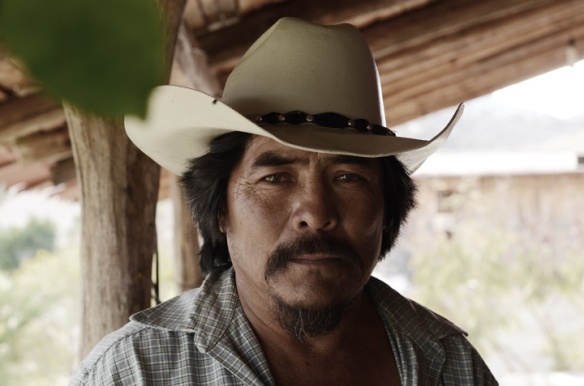 Oaxaca City is said to host a festival of some kind every week.    The most famous festivals are “Guelaguetza”, a native arts/dance festival, “Night of the Radishes” Christmas season celebration and the Day of the Dead.. There are always people walking around the city in costumes and native outfits. They are either going to festival, coming from a festival or rehearsing for a festival. 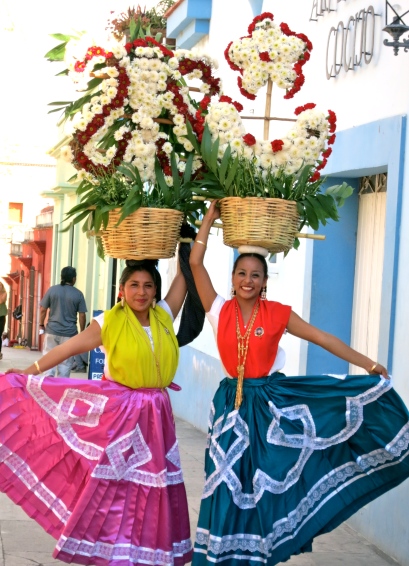 This is not me.

This is either a dress rehearsal parade for Guelaguetza or a celebration because it is Benito Juarez’s birthday today. 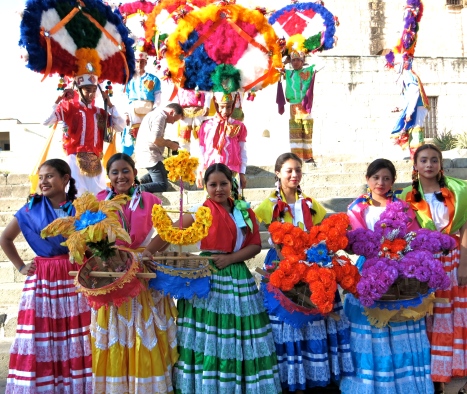 Sixteen different indigenous groups are formally registered within the state. Oaxaca State is the original territory of the Pre-Columbian civilizations of the Zapotec and the Mixtec peoples. ( Photo © Ben Goodman / licensed by Culture Xplorers ) 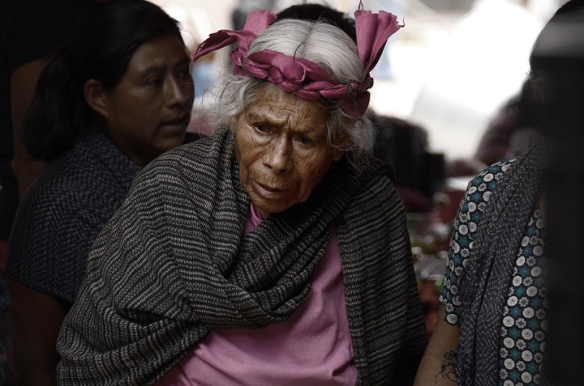 Signs at Temple sites are in English, Spanish and Zapotec

The area was conquered in 1486 by the troops of Aztec Emperor, Ahuizotl, and named “Huaxyacac”. In Nahuatl (the language of the Aztecs), Oaxaca means “on the top of the Guaje (Acacia) tree.”

There are many fewer incidences of violence in Mexico now because the new President is with the drug cartels. In Colombia, the president has made a deal with the drug cartels as well. Mexico says their drug problem is caused by keeping up  with the high demand for drugs in the United States.

If you are at Ocatlan Market on Fridays you can buy turkeys, chickens, a goat,  souvenirs, a saddle for your donkey, native costumes, religious artifacts, medicinal plants, flowers and food.  Photo © Ben Goodman / licensed by Culture Xplorers )

By the third sip you start enjoying the flavor of mezcal. 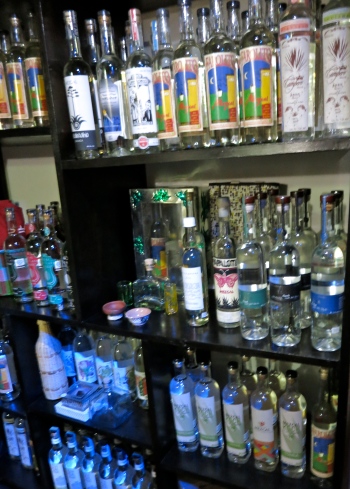 The code of arms in Oaxaca is a severed head.

How to sell pants in Oaxaca. 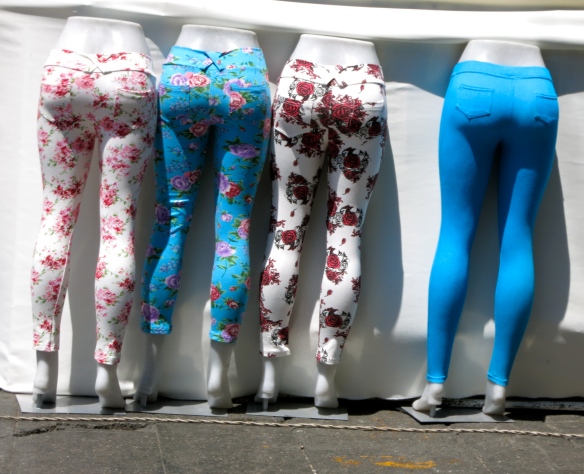 The term Mesoamerica refers to a geographical and cultural area which extends from central Mexico down through Central America, including Guatemala, Belize, Honduras and El Salvador.( Photo © Ben Goodman / licensed by Culture Xplorers )

Many important ancient civilizations developed in this area, including the Olmecs, Zapotecs, Teotihuacanos, Maya and Aztecs. They all ate corn, beans and squash, had a calendar system, some form of writing, and played that game with the rubber ball. (Mt Alban  Photo © Ben Goodman / licensed by Culture Xplorers ) 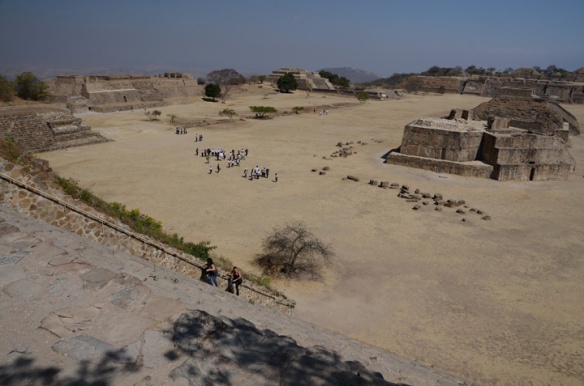 Tiny bananas are much  sweeter than the larger ones.

Teotitlan Del Valle (Place of the Gods)  is a village east of Oaxaca City. It has about 5000 inhabitants and most homes have a workshops for weaving. The wool used today came with the  Dominicans and the Spanish as a replacement for the cotton that was grown there We had a full demonstration at El Encanto. 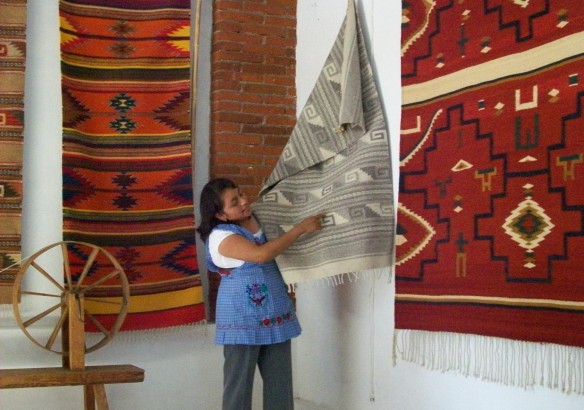 The wool is washed with amole a root when mixed with water creates suds. The wool is carded and spun into yarn. They are natural colors. Some of the colors are created by mixing the different natural colors of wool  grey brown black and white. They had indigo and charcoal for blue, pecan shells for shades of brown, marigolds for yellow and moss for green. Cochineal which creates reds comes from an insect that lives on a cactus. Adding lemon will change it to orange and adding baking soda will turn it to purple. The weaving designs are inspired by traditional patterns from the Zapotecs.

Hierve el Agua is a natural warm spring which contains air trying to escape, hence the name “Hierve el Agua”which means “the water boils”. The water is also full of minerals, so as it runs off of the edge of the nearby cliff, calcium carbonate and magnesium in the water create a petrified waterfall, and the sulphur ads nice yellow accents in places. There are only two such sites in the world, the other one is in Turkey. (  first two photos © Ben Goodman / licensed by Culture Xplorers  – frozen waterfall, “water”,  mineral pools,)

San Martín Tilcajete is one of three main Zapotec villages where most of the residents earn a living from carving and/or painting colorful figures. Often generically called alebrijes, they are shaped from the branches of the copal tree. The other villages are Arrazola and La Unión Tejalapan. The carving alone takes up to a month. The figure is then left to dry for up to ten months, depending on its overall size and thickness.

Theories abound about the beginning of the modern-day manifestation of the art-form. Some say that because hallucinogenic mushrooms are native to this part of Mexico, drug induced revelations caused the imaginations of some to wander, ultimately becoming expressed in their carvings. The better explanation appears to be that knowledge of colorful, large, papier maché alebrijes or dragon-like forms that originated in the State of Mexico. 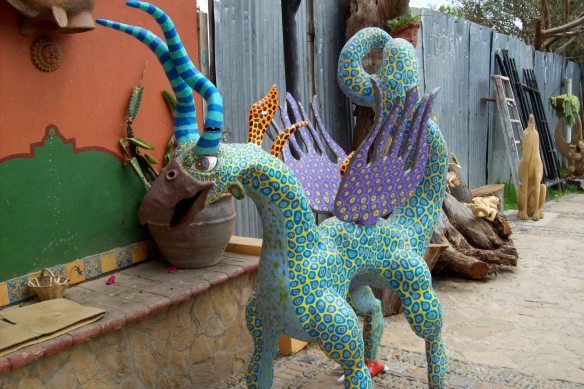 Honey acts as a mordent, making the color permanent and a little shiny.  Powdered limestone, baking soda and lime juice changes the color base . Bases are made from natural substances like pomegranate seeds, indigo, corn fungus and cochineal.  A beautiful place to see and buy these pieces is the home workshop of Jacob and Maria Angeles. They both came from wood carving families and I noticed many collectors returning as I will. Once you buy one of these, you want more. http://www.jacoboymariatilcajete.org/

Oaxaca City is a place of ever-changing light and colors.  It is a city for artists.

3 thoughts on “Things I Have Learned In Oaxaca, Mexico”