Foods I Have Learned in Oaxaca, Mexico

“Good painting is like good cooking: it can be tasted, but not explained.”  Maurice de Vlaminck

Mexico introduced chocolate, corn, and chilies to the world. 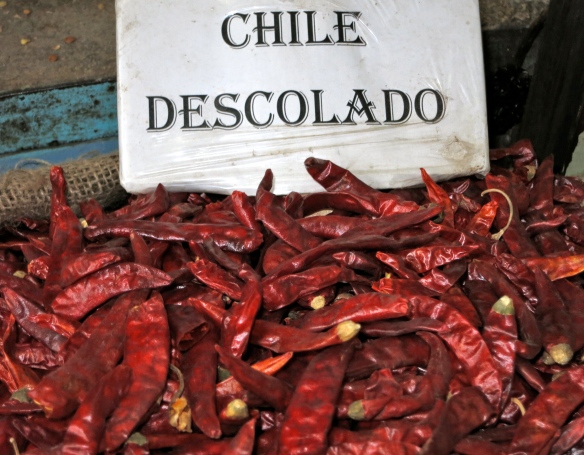 Corn smut (Ustilago maydis) is a plant fungus that causes smut disease on maize. The fungus forms  on all above-ground parts of the corn , and is known in  Mexico  as huitlacoche; it is eaten, usually as a filling, in quesadillas and other tortilla-based foods, and soups.  Test results  published in the journal Food Chemistry reveal that an infection that U.S. farmers and crop scientists have spent millions trying to eradicate, is packed with unique proteins, minerals and other nutritional goodies. It can be sold for more than the corn it ruins.  It is supposed to taste good –I couldn’t do it. It is hard to get past the fact that it is sold in the street and it looks like a fungus brain disease before cooking.

Traditional Oaxaca chocolate is prepared in a number of ways. It is often ground with sugar, cinnamon, and almonds, and formed into bars which can be used to prepare hot chocolate and other dishes. You may hear this form of Oaxaca chocolate referred to as “Mexican chocolate”,  and is often in beautifully packaged octagonal boxes with thick wedges of chocolate. It is always good to visit a city famous for chocolate

Eating at a taqueria in Oaxaca involves not only pork, chicken or beef but what part of the pig you will have in your tacos. Will it be lard-simmered skin or tongue, liver or heart, ear, kidney, stomach or surtida, a mixed bag?. I was definitely  the tourist ordering chicken at a place that would run out of pig snout by lunchtime.(the pork, the tacos)

The city of Oaxaca is considered by many as “Mexico’s Culinary Capital” and is nicknamed “The Land of the Seven Moles”. The national dish is “Mole Poblano”.  Mole Poblano, the original chocolate version of this complex, gorgeous sauce, was created by a nun in 17th-century Puebla. It was in Oaxaca, however, that mole evolved into high art: There are seven varieties, which come in a surprising spectrum of colors with a vast range of ingredients. 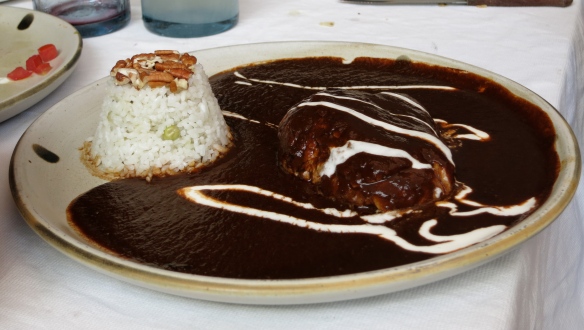 Mole Negro is a sauce made from many ingredients. Every family has their own recipe and replications are difficult unless you spend time learning with the original maker. Most recipes are passed down the maternal line of the family and each recipe is proclaimed as the most deliciosa.

Made mostly of barbequed grasshoppers, “Chapulinas” is a coveted Oaxacan delicacy. It is good on tacos with guacamole and cheese . We had it every day. Sometimes twice They taste like those peanuts with chili and lime –just a little more leggy. If you do not eat bugs in Mexico, you are the weird one. 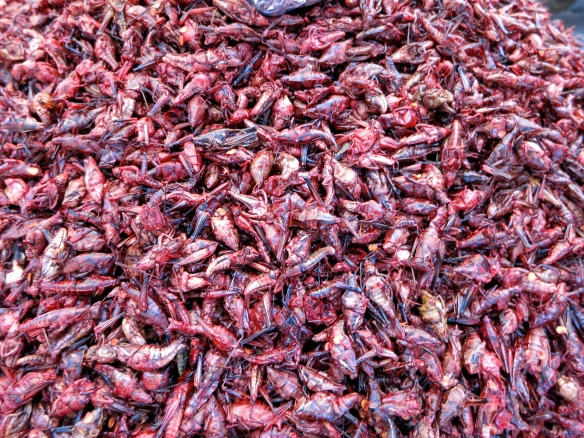 Maguey worms  ( you know them as the worms in the Mescal bottle) are wrapped in a mixiote (a fleshy maguey leaf) and then barbequed or just roasted directly on a hot pan until they become slightly golden and crispy. It is possible to bite into a taco and find one. Mexico is on the US Travel List of Countries that Eat Insects in case you do or don’t want to have them.

When McDonald’s planned to open an outpost in the Zócalo area of Oaxaca, renowned artist Francisco Toledo and his friends set up a stand in front of the proposed location and gave away tamales, atole  and other deeply regional foods—and McDonald’s skulked away to the suburbs.

Atole is a traditional masa-based drink of Mexican and Central American origin. Chocolate atole is known as champurrado or atole. It is typically accompanied with tamales, and very popular during the Christmas holiday season (Las Posadas) The drink typically includes masa (corn hominy flour), water, piloncilo (unrefined cane sugar), cinnamon, vanilla and optional chocolate or fruit. The mixture is blended and heated before serving. Although atole is one of the traditional drinks of the Mexican holiday Day of the Dead, it is very common during breakfast and dinnertime at any time of year. Atole is usually sold as street food. 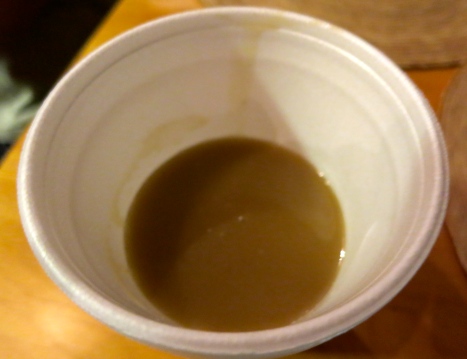 If you like to cook, do not miss the cooking class of Oscar Carrizosa at Casa Crespo. If you like to eat, do not miss the meal prepared by your friends at the cooking class. Not only was the food delicious but the beautiful eighteenth century house with its collection of local artwork is a wonderful place to hang out and watch them cook. (Oscar, place setting with cucumber and lime juice, guacamole and mango, mole) http://www.casacrespo.com/ 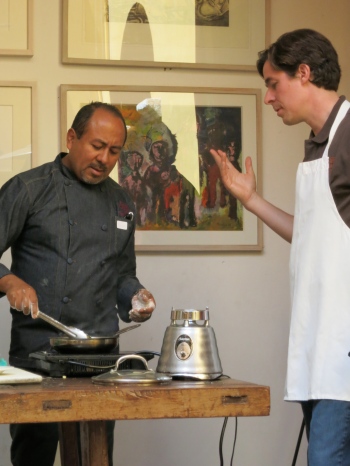 One of Oaxaca’s best-known products is mezcal, an alcoholic beverage similar to tequila but distilled from varieties of cactus –agave. . The plant must be six to eight years old before it can be harvested. Bottles of mescal always used to include a worm, a practice that originated in the 1940s when Jacobo Lozano Páez accidentally discovered that a worm enhances the flavor of mezcal. They don’t use it so much anymore.

For a great Mezcal tasting and food pairing go to In Situ and have Ulises teach you about Mezcal.   He has written a beautiful book about mezcal and will be glad to sign it for you. This is not the commercial rotgut with the worm pickled inside which tastes like formaldehyde. Some of his beautifully bottled Mezcal is as sophisticated as the finest single malts. Ingredients from the earth enter into almost every stage of the process. The piñas are roasted over wood charcoal in a stone-lined pit covered in plant matter and earth, then ground, fermented in wooden vats and distilled into a husky, fiery liquid. So Mezcal ends up tasting like Mexico.

13 thoughts on “Foods I Have Learned In Oaxaca, Mexico”