“If I had known they were going to do this, I would have become a shoemaker.”

Things I Have Learned in Okinawa and Hiroshima

Driving on the Okinawa Expressway in the rain is like driving anywhere else in the rain.

Touring Shuri-jo Palace in Okinawa one must follow the signs that say “usual route.”  What is the unusual route? 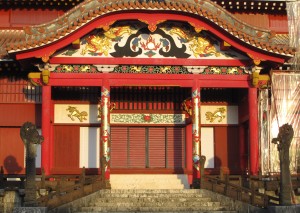 One of the hardest things to see was the Himeyuri Peace Museum in Okinawa.In the face of the American invasion, the Japanese forces stepped up the nurse training in the local high schools. Three hundred and two high school  students (mostly girls) and twenty one teachers were deployed to the front. They were told they would be working in hospitals but ended up in hospital caves with very bad conditions. There was no legal basis in Japan to use young girls for military purposes. On June 18th 1945 the Japanese forced the young girls out of the caves to fend for themselves against the American attack.  On June 23 the Japanese resistance ended. In those five days, 219 of them were killed. The museum is a model of one of the high schools that the girl’s came from. High school students from all over Japan come to pay their respects.

I was the only foreigner in the museum with alot of high school kids from Japan. I was looking at the photos  of the girls and was standing next to an old woman. She started to talk to me but I didnt understand so I found someone to translate. (not so easy to do in this museum).  We were standing in front of a picture of her daughter.  Two strangers became two mothers  looking at the ultimate tragedy. 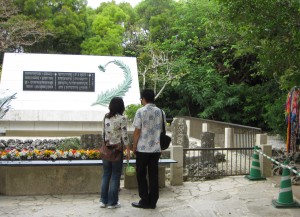 Busena Terrace in Okinawa is the Grand Wailea/ any resort in Hawaii. Naha looks like Lahaina  . You can always find the American servicemen and their families at the Mcdonalds. 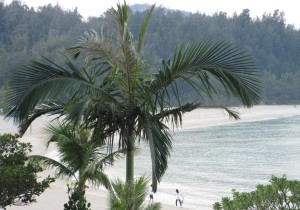 The Japanese and the Koreans were just as bad to the Okinawans as the Americans in WW2.

Okinawa Aquarium contains the largest fish tank in the world according to the Guinness Book of World Records.

The Okinawa  Peace Museum is a memorial dedicated to the 200,000 people who died in the Battle of Okinawa. It is located in the south part of the island where the heavy fighting took place.  Over 100,000 were civilians and 12,500 were Americans. The civilians died from shellings, suicides, starvation, malaria and retreating Japanese troops. It was the largest campaign in the Pacific.  The lesson of the memorial is  the “Okinawan Heart”  that rejects any act of war, mourns for those who died in the war, passes on the stories of their struggle to future generations  and remind us of our humanity.

Other monuments in the park include the “Cornerstone of Peace”, a collection of large stone plates with the names of all fallen soldiers and civilians, including Koreans, Taiwanese, Americans and British.

After WWll , Okinawa was under United States administration for twenty seven years. They established numerous military bases on the Ryuku Islands.  In 1972, the islands were returned to  Japan but the US has maintained a large military presence. There are about 50,000 Americans  in Okinawa (including family members). There is protest from the Japanese and the Okinawans about the large American military presence there. They are trying to resolve it with a modified plan.

“As the bomb fell over Hiroshima and exploded, we saw an entire city disappear.  I wrote in my log the words”My God what have we done? ”The death was up to about 150,000 There were 76,000 buildings in the city at the time and only 8%  of them remained intact after the bomb explosion. The bomb affected an area of around 13 square kilometers and turned that into ruins.”

The closest surviving building to the location of the bomb’s detonation  in Hiroshima was designated the Hiroshima Peace Memorial.

After the bombing, Hiroshima began to receive donations of streetcars from all over Japan. (After World War II, Japanese cities – like British ones – wanted to get rid of their streetcar systems due to damage to the infrastructure)  Hiroshima  rebuilt its streetcar system along with the rest of the city.   Hiroshima is now  the only city in Japan with an extensive streetcar system (although other cities have streetcar lines). Some streetcars that survived the war – and the nuclear attack – were put back into service, and four of these are still running today.

Hiroshima has now became a center of the movement for world peace and reduction of nuclear bombs, which is commemorated at the Hiroshima Peace Memorial. The city government continues to advocate for the abolition of nuclear weapons . They write a letter of protest every time a nuclear weapon has been detonated anywhere in the world. In 1949, Hiroshima was proclaimed a City of Peace by the Japanese parliament. 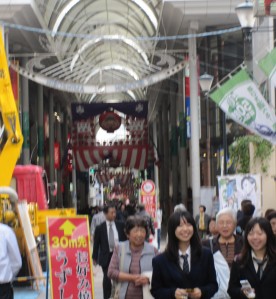 The Thousand Origami Cranes was popularized through the story of Sadako Sasaki, a Japanese girl who was two years old when she was exposed to radiation from the atomic bombing of Hiroshima during World War ll. Sasaki soon developed leukemia and, at age 12, inspired by the Senbazuru legend, began making origami cranes with the goal of making one thousand.  One popular  story is she died before and her classmates finished  them. The Hiroshima Museum says she completed them and kept making more  when she didn’t heal.  One thousand origami cranes is said to bring a thousand years of health , happiness and prosperity. The cranes are left exposed to the elements, slowly dissolving and becoming tattered as the wish is released.

People leave them in her honor  and for all the people who died from the bombing at the Eternal flame in the Hiroshima Peace Memorial. 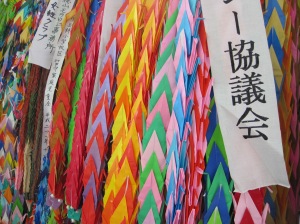 My father was stationed in Okinawa during World War Two.  He never talked about it.  There were some black and white photographs  of him in a uniform, skiing in Hokkaido, and the  old Japanese life in the cities..  The first words I ever learned to say in a foreign language  was not the Yiddish that my grandparents spoke but I Am An American Soldier in Japanese. Watashi wa Amerika hei desu. I guess I just wanted to see what happened for myself.

1 thought on “Things I Have Learned In Okinawa And Hiroshima”