“You can’t be a real country unless you have a beer and an airline – it helps if you have some kind of football team, or some nuclear weapons but at the very least you need a beer” - Frank Zappa

Things I Have Learned In Munich

Pedestrian crossings in Munich often have a sign saying “Set an example to children”  Something we should all remember to do.

“Dachau is a lovely town in Munich which happens to have the first concentration camp located there. But this was not an extermination camp and the largest number of people were not killed there. “ (quote from a guide book)

Birds never sang in Dachau even though there are many trees, because birds do not like the smell of death.

Brausebad is the old German word for shower. It was written outside the door of the “shower” in the camps. After WW2 they were not allowed to use that word anymore and it became douche instead. 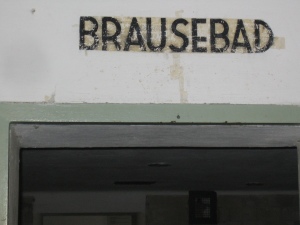 Nazis are big business in Germany. You can take a third Reich tour in Berlin and Munich. You can visit Dachau outside of Munich or Sachenhausen outside of Berlin. In the tourist bookstores you can buy Hitlers Favorite Places in Munich, Famous Nazi’s of Munich, and Hitler’s Berlin or Hiltler’s Munich..

The Irish backed the Germans in World WarTwo. (anything to go against the English)

I was in Munich in November and missed Oktoberfest.  I didnt have to bring my lederhosen and dirndl and missed the overindulgence of beer and pretzels , beer and weisswursts,  beer with sauerbraten , beer with potatoes and beer with beer.

Haidhausen is the place to be in Munich if you are a schiki miki (club going Bavarian Hippie), or Eidel chic or one of the Mueslis (European granola types)

Weisswurst breakfast which consists of boiled white sausages in milk  that you eat by sucking  out of the casing, with a fresh baked pretzel and mustard is surprisingly delicious.

A sign seen in a Munich store window “Wurst Fuchs”.

Pabst Blue Ribbon beer means the Pope’s beer. Every year the Pope comes to Munich to bless the hops

If you want to see hordes of tourist getting ridiculously drunk with huge steins of beer, go to Hofbrau House in Munich (Hitler’s fav)

The German New Wave Goth Punk teenagers are not people you want to share a train car with.

Neuschwanstein castle  in the Bavarian Alps (the sleeping beauty castle) is probably best visited when it isn’t snowing.

After returning from Germany, I was watching a documentary  entitled, The Rape of Europa.  It was about  European art stolen by the Nazis . I  saw a castle that looked familiar.  I was there in a snowstorm so I didn’t recognize it right away.  The first art recovered from the Nazis( that had been  stolen from the French) was stored in Neuschwanstein castle. There were many rooms filled with stolen art  and it was a fact they left out when I took the guided tour of “the Sleeping Beauty Castle. “ 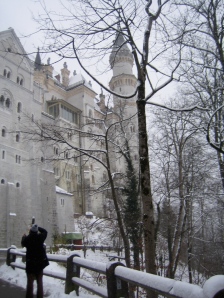 On the program at the ballet in the Bavarian State Opera House, they list the minutes of each act and each  intermission and the starting and ending times. German attention to detail put to good use! (and Mia was great! )

Munich being closer to Milan than it is to Berlin has amazing Italian food and great pizza.

Whenever you are in a coed sauna (especially if it says naked area)  in eastern Europe and Germany just know that it will be inhabited by fat, old, naked men.

In the 1960’s and 70’s the next generation of Germans were horrified when they learned what their parents have done.  I had this feeling in Munich and Berlin. Dachau, the Resistance Museum , the Jewish memorials and the Jewish museum were filled with  school children on class trips.

2 thoughts on “Things I Have Learned In Munich”